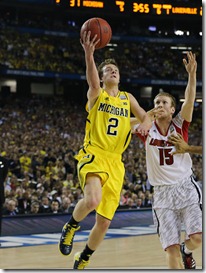 But whenever he was called upon as a freshman, Spike Albrecht answered the bell.

His National Championship game performance – 17 points on 6-of-9 (4-5 3pt) shooting for those that forgot – stands out but Albrecht made timely plays throughout the season. He averaged just eight minutes, two points and less than one assist per game as a freshman, reaching double figures just once but here are five statistics that could point toward future success for Michigan’s point guard. (Photo: Dustin Johnston)

Albrecht was the fifth most efficient player in the country on spot-up offensive possessions. He scored 43 points on 26 spot-ups for the season. He was 14-of-24 from the field with an incredible 85% effective field goal percentage.

The majority of that production came from catch and shoot jump shots where Albrecht was also lethally efficient. He was 13-of-25 on catch-and-shoot field goal attempts on the season, a 75% effective field goal percentage.

Albrecht’s tempo free passing numbers look fairly pedestrian. His assist rate of 14.6% is lackluster and his turnover rate is elevated at 21.4%. However, his efficiency numbers in the points per (possession and assist) metric are impressive.

Albrecht scored 1.43 PP(P+A) for the season, which ranks in the 97th percentile nationally. While he can struggle to score in many scenarios, his ability to find teammates elevates his numbers. His PP(P+A) is impressive in the halfcourt, 1.412 PP(P+A) (97th percentile), and in transition, 1.5 PP(P+A).

3. He knows how to distribute on ball screens.

Albrecht ran 33 ball screens in his freshman season and Michigan scored 1.09 points per possession on those opportunities.

How impressive is that number? It ranks in the 92nd percentile nationally and is actually more efficient than Trey Burke’s 1.045 points per ball screen. Burke was the Player of the Year last season because he ran 487 ball screens at that level of efficiency but Albrecht shows promise.

Michigan’s backup point guard was able to reach that level of ball screen efficiency despite scoring just .692 points per possession (47th percentile) when he attempted a shot off of the ball screen. That stems from his ability to find teammates in all three phases of the pick-and-roll with dishes to the roll man, spot up shooters and cutters at the rim. Albrecht’s ball screen passes scored 1.35 points per possession (94th percentile).

Albrecht’s timely performances shouldn’t be underrated. He was backing up the best player in the country last year and was often times called upon to relieve him in pressure situations.

On the rare occasions where Burke was playing poorly, Albrecht was ready to make an impact. In Michigan’s first loss at Ohio State, Albrecht checked into the game with 6:52 to play in the first half. The Wolverines were trailing 29-8. He scored seven points and led the Wolverines on a 14-5 run to trim the deficit to 12. That’s just one example but it was a trend throughout the season.

When Burke found himself in foul trouble, Albrecht was also ready to step in and right the ship. Never more famously than in Atlanta last April when he went on a three-point barrage in the first half of the National Championship.

His best offensive performances also seemed to come in the biggest games. He was exceptional against Louisville, Ohio State, Florida and VCU to name a few.

Albrecht was also clutch in late clock scenarios. He attempted nine field goals with less than five seconds on the shotclock and came away with an impressive 78% effective field goal percentage.

5. His NCAA tournament was legendary.

He scored 36 points and shot 13-of-18 (9-10 3pt) in the NCAA tournament with six rebounds, four assists, three steals and six turnovers in 77 minutes. That’s 18.7 points per 40 minutes with a 97% effective field goal percentage, a 129 offensive rating and a 17.6% usage. He hit at least one three-pointer in Michigan’s final five tournament games and seemed to reach a new level of consistency as he saw his minutes per game average creep to just shy of 13 minutes per game.

Sample size is a major concern with any of these numbers. Albrecht played only 317 minutes and attempted 57 shots as a freshman. That’s about nine games worth for a full time starter. (He also started an exhibition game, scoring 16 points (4-of-7, 3-6 3pt) and handing out six assists in 30 minutes of playing time.)

But the issue with throwing out all of Albrecht’s numbers due to sample size is that there are plenty of guys that played limited minutes last season and very few of them have numbers to match Albrecht’s.

He’s not the biggest or most athletic point guard but whenever Albrecht was thrown into the mix, he made positive plays. These numbers aren’t to argue that Albrecht is the answer at point guard or that Derrick Walton shouldn’t start. Walton is an incredibly talented point guard in his own right and very well could and should start for the Wolverines. However, Michigan has a luxury in Albrecht and one that shouldn’t be underrated heading into a new season.

Albrecht’s inability to finish at the rim (he shot just 31% at the basket) and defensive abilities are definite concerns that could be magnified in a full-time role but the positives that he brought to Michigan’s 2012-13 season shouldn’t be overlook.