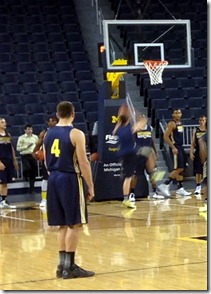 Just before John Beilein took the podium before Michigan’s first full practice of the season, a press release went out that likely struck fear in the hearts of Michigan diehards: Mitch McGary has been struggling with a "lower back condition" for most of the fall, and it’s unknown when he will be able to return to full practice form.

The big man battled injuries at the beginning of last season, as well, and felt their effects well into non-conference play. His major issue last season was his foot. Now, it’s his back.

"It’s day-to-day and he’s working like crazy to get back," Beilein said about the injury. "He’s not going to be out there today (for practice)."

McGary reportedly had a great summer, continuing to get his body in shape and putting on muscle while losing fat. While there were reports of his weight hovering near 265 during the summer months, in the brief portion of practice we saw on Friday McGary, though inactive, looked lithe and fit.

Instead of trying out for the USA’s World University Games team, McGary opted to attend the Amare Stoudemire Big Man Academy in June, a camp for the top 10 post players in the country.

But for now it appears McGary will be limited in practice as he overcomes what is hopefully not a nagging injury.

"It’s been day-to-day pretty much all fall, so we’ll move forward from there and we’re very hopeful that it’s gone before too long," Beilein said. "He had a great summer. He’s done some on-and-off things this fall."

One of the most closely-watched positions for Michigan this season will be the point guard spot. Coming off of the Year of Burke, the Wolverines will be breaking in a new starter at lead guard, whether it’s freshman Derrick Walton or Spike Albrecht.

Walton, along with the rest of the freshmen, has been learning the fundamentals of Beilein’s offense — and when I say fundamentals, I mean re-learning how to pass the ball and catch the ball the way Beilein prefers for his players. The extra practice time college teams get this offseason has helped in that regard.

"We hope it’s going to be really helpful for us because, if my math is correct, we would have 24 practices in four weeks; now we have 30 practices in six weeks," Beilein said. "So as a result, we’re going five days a week. Those six extra practices should really be helpful for us in the summer. This change is so good, practicing in the summer and being able to practice at the right rate. The teams that really emphasize skills and fundamentals, like we hope we do, really can benefit from it. Derrick and the rest of the freshmen would be no exception."

Beilein said that while he has been forced to break in young point guards for a few years running at this point, it’s not something he’s new to after 38 years of coaching.

"I’ve been doing it a long time, so every couple years it feels like you’re breaking in a guard, because they’re the quarterback, they’re the ones that you have to have a great connection with," Beilein said. "So I’m pretty used to it, not just these two years from before. First of all, these young men are really talented, and second our staff is really helpful. Vall (Jordan) and Jeff (Meyer) and Bacari (Alexander) have been great not just in teaching, ‘this is the way we guard people,’ but in teaching ‘this is our culture.’ Derrick has been really receptive to all of this so far, and he’s got Spike right by his side."

Albrecht and Walton are ostensibly competing for the same starting spot, but Beilein stressed that this competition isn’t what either is emphasizing at the moment. For now, it’s about making sure their teammates want to play with them.

"I think right now, as far as what I hear in open gyms, people like playing with both of them," Beilein said. "It’s not as much them going against each other as it is them embracing — because they both have great goals in the amount of assists they can have. They both value that so much."

Michigan coaches have surely known what recruiting services have said about freshman Zak Irvin for years: the kid is great on defense. This isn’t a commonality like saying he "has a motor" or his "length is disruptive" — consistently, Irvin took the other team’s best player during AAU tournaments and has always prided himself on his defense.

Now, the Wolverine coaching staff is seeing just how enthusiastic Irvin is on the oft-neglected half of the court.

"Defense is a norm for him. From what we’ve seen so far, he likes to play defense. And to be honest, there aren’t a lot of people who look at that end of the floor and say, ‘I get to play defense,’" Beilein said. "He’s given no indication that he doesn’t love playing on that end of the floor. And that’s always good. That’s not normally what you get from the scorer, the shooter that he’s been in high school. He relishes both roles."

Irvin is a serious scorer and a serious defender. His versatility will allow him to play many different roles for Michigan this season.

But one thing Beilein sees that sets Irvin apart on the offensive side of the floor: aggressiveness.

"He’s a hunter, as well, and I like that," Beilein said. "He’s more aggressive offensively than some of the other freshmen who have come in here and obviously that’s something we can work with."

Notes: Beilein provided a moment of levity when he referenced the fact that this year’s team will be referred to as "Team 98," somewhat confusing given that last season’s squad was "Team 96." Beilein explains: "We discovered there was a year in 1909 when we did have a team. This is officially now Team 98, and we’re going to be talking about how we put our stamp on that. I guess there never was a Team 97."