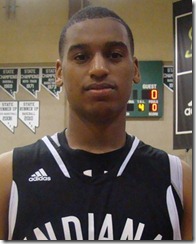 First reported by Kyle Neddenriep  of the Indy Star, class of 2014 wing guard Trevon Bluiett is opening things back up and has decomitted from UCLA.

Michigan offered Bluiett in June of 2012 and recruited the 6-foot-5 wing guard steadily over the last year and a half. Bluiett committed to UCLA after taking an official visit on August 31st. He had originally planned to visit Michigan on that date before changing his plans.

It remains to be seen who will become seriously involved with Bluiett the second time around but Michigan is also recruiting class of 2014 guards Devin Booker, James Blackmon Jr. and Javon Bess (not offered). The Wolverines also landed a commitment from 6-foot-7 wing Kameron Chatman earlier this week.