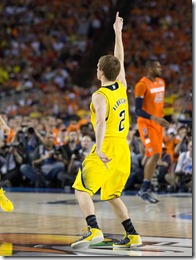 Over the next two months we’ll rundown some of the biggest storylines facing the 2013-14 Michigan Wolverines. In this edition we look at the point guard position battle as the Wolverines look for an option to replace Trey Burke. Previously: 2013-14 expectations

The past few seasons have left Michigan feeling like “Point Guard U.” From Darius Morris leading the Wolverines to the second round of the NCAA tournament to Trey Burke’s ascendance to the heights of college basketball superstardom, the success of Michigan’s point guards over the latter portion of John Beilein’s coaching tenure is impossible to deny.

And now, with Burke playing for the Utah Jazz this season, Michigan’s coaching staff again finds itself in the familiar position of breaking in a new starting lead guard. Fortunately, it appears the Wolverines have two talented players to choose from.

Incoming freshman Derrick Walton arrives at Michigan this season with all the credentials to make an impact for the team immediately. The talented point guard was a four-star recruit and a top-100 player nationally. Walton appears to have all the tools: he was a prolific scorer for Chandler Park Academy and has always had great vision. Quick and athletic, Walton has all the tools to be a solid option at point guard, even as a freshman.

Walton’s competition will be sophomore Spike Albrecht, he of NCAA title game fame. While Albrecht may lag behind Walton in natural athleticism and ability, he gains ground in his revelatory play last season. He didn’t play much, but he played well: in limited minutes Albrecht proved to be a reliable shooter and less turnover-prone than post freshmen, hitting over half of his attempts from downtown last season. During the NCAA tournament, his minutes trended upward to about 10 minutes per game and made at least one 3-pointer in every game after the first-round matchup with South Dakota State. And then, famously, Albrecht scored an improbable 17 points on four 3-pointers against Louisville in the national title game.

All of this adds up to what should be an interesting competition at the point guard spot. Walton has the talent, but Albrecht has the experience — and one year under Michigan’s coaching staff, along with following their strength and conditioning program, should help Albrecht close the gap as far as physical tools go. Walton has been dubbed “Spike Albrecht on steroids” by assistant coach LaVall Jordan but Albrecht could be the more trusted option early on.

Here’s my best guess: I think we’ll see both players log minutes at point guard early in the season as Walton gets acclimated to the college game. I’m of the opinion that Albrecht’s success last season was no flash in the pan and that he can be a player for Michigan — but after splitting time early on, Walton will emerge as the choice at point guard.

I don’t think the decision will necessarily mean Walton is that much better than Albrecht at running the point. However, I do think Albrecht has more flexibility as far as where he can play because of his experience and shooting ability. Albrecht will surely see the court next season in some capacity, but Walton is a pure point guard and he has enough on his plate adjusting to the college game without learning a new position. Albrecht will have an easier time settling into a different role because he has a year of experience and also played alongside Burke at times last season. I also think we could see both Walton and Albrecht playing at the same time in a similar look.

RELATED: By the numbers: Making the case for Spike Albrecht

Albrecht will undoubtedly see time at point guard early on and will continue to spell Walton at the point as well as fill other roles in the offense. While playing Albrecht at shooting guard would likely be a defensive liability, it wouldn’t surprise me at all if we see that look next season – at least in late game scenarios where ball handling is at a premium.

Michigan actually finds itself in a more favorable position at the lead guard spot than in recent years. The Wolverines are bringing in a talented freshman with an experienced, somewhat proven point guard ready to teach, lead and compete for playing time. In previous years it was boom-or-bust for Michigan’s newcomer. While that worked for Trey Burke, there were growing pains during Darius Morris’ freshman season. It’s a nice problem to have, and while I think Walton will be the team’s starting point guard, you can bet Albrecht will force to the coaches to play him elsewhere.