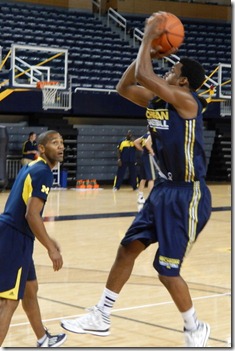 Derrick Walton or Spike Albrecht, who will replace Trey Burke? That’s been the question throughout the offseason in Ann Arbor and with Michigan’s first exhibition game just days away, John Beilein isn’t ready to call the race quite yet.

“I’ll wait a couple more days [to name a starter at point guard],” Beilein explained. “But between Derrick or Spike, I guarantee one of them will be at point guard. But it’s very different than everybody knowing that Trey was going to be at point two straight years. But we’ll play with that a little bit and see who is best coming off the bench. You know the deal with me, sometimes the guy coming off the bench may be the better fit for the team..”

Derrick Walton is the top-50 recruit with high expectations. Spike Albrecht is Michigan’s NCAA tournament Cinderella star that wasn’t even a top-500 recruit coming out of prep school. Albrecht can run the pick-and-roll, knock down open jumpers and run the team but, eventually, Derrick Walton is the point guard of the future. He’s been been Michigan’s point guard of the future since he committed in 2011 – before Trey Burke even played a game at Michigan.

Beilein isn’t going to rush Walton if he doesn’t need to. Right now, Albrecht is winning games in practice and valuing the basketball.

“It took Trey a little bit to get in front of Stu [Douglass]. Derrick is coming on really strong, but I think Spike right now – I think the other day he had 20 assists and two turnovers,” Beilein said. “I’m saying, ‘I’m still mad, Spike, about those two turnovers,’ because I thought they were turnovers that he knew better than to make. Spike’s teams traditionally win in scrimmages no matter who we put him with, so we’re still trying to figure that out. Some of those answers are fundamental; it’s just about the right guys.”

Trey Burke wasn’t necessarily brought along “slowly” as he started his second career game but he did come off the bench for two exhibitions and the season opener as a freshman (sitting for part of one game due to a disciplinary action). Michigan’s head coach isn’t scared to throw a freshman point guard into the fire but maybe Albrecht can push Walton in the early season. At the very least, Beilein will welcome an alternative option – something he didn’t have during Darius Morris and Trey Burke’s freshman seasons.

The Wolverines don’t have much time to ease their way into the season so any early experience will be valuable. Michigan will play a pair of exhibition games, host routine non-conference games against UMass-Lowell and South Carolina State before traveling to Iowa State and the Puerto Rico Classic – all before Thanksgiving.

Whether it’s Albrecht or Walton, there are big shoes to fill. Last year’s National Player of the Year is gone and everyone wants to see how the nation’s most efficient offense last season performs without its star point guard.

Derrick Walton is aware of the expectations but he remains unfazed. He knows that Michigan doesn’t need him to be Trey Burke, they need him to play the point guard position well.

“I wouldn’t say it’s a challenge,” Walton said. “A lot of people ask me the same thing, so my answer is always that I’m just going to be myself. I can’t do what Trey did last year, and I’m fine with that.”

Players and coaches at media day was quick to point out the obvious difference between Walton and Burke. Burke was a hunter and a scorer. He could find the open man, no question, but he always had a scoring mentality. Walton is the opposite. He can knock down an open shot and get to the rim but he’s at his best when he’s making his teammates better.

“I think Derrick is much more where I’m going to make the right play and it could be my shot and I would probably urge him to shoot it more,” Beilein said. “So they both have these great qualities of having a feel of what’s best to help us win. You’ll probably see me telling Derrick, ‘You have to shoot that,’ where Trey may have been, ‘Trey, that was the time that we think you should have passed it.’ So it’s all good, both of them brought high energy and a great skill set to us.”

Walton’s style of play could be the perfect fit for this Michigan team which has a bevy of talented scoring options in Glenn Robinson III, Mitch McGary, Nik Stauskas, Caris LeVert and Zak Irvin. The Wolverines don’t need Walton to dominate the basketball as a scoring option as Trey Burke did, they just need him to run the show.

Albrecht is taking the point guard competition in stride while also getting a feel for the competition at seemingly every position on Michigan’s roster.

“It’s been a lot of fun. [Walton] and I, we’ve had a great time competing,” Albrecht said. “And then other guys, you see Nik and Caris go at it, and Glenn and Zak. We have a lot of guys battling and competing for minutes. But at the end of the day, we’re all brothers so it’s all good in the locker room after.”