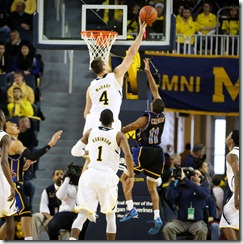 Yesterday we looked at Michigan’s offense and where the Wolverines need to improve. Today, we take a closer look at the Michigan defense and what problems have presented themselves in early season play.

We focus on Michigan’s transition defense, zone defense and who has displayed the most consistent defensive ability early on this season. (Photo: Dustin Johnston)

1. Transition defense is a concern

Michigan’s defense has been pretty good this season. The Wolverines defended Iowa State and Charlotte better than any other team this season and defended Duke very well for about 30 minutes. Michigan’s adjusted defensive efficiency ranks 30th, three spots ahead of its offense and 18 spots above where last year’s team finished.

Michigan’s half-court man-to-man defense has been excellent, surrendering .741 points per possession, good for the 90th percentile nationally. That being said, there are a few trouble spots starting with Michigan’s transition defense.

According to stats from Hoop-Math, Wolverine opponents have a 63.2 effective field goal percentage in transition compared to just 42.82 effective field goal percentage in the half court. Michigan’s transition eFG% allowed ranks 321st whereas its half court eFG% allowed ranks 47th. The 20.38% difference between Michigan’s eFG% defense in transition compared to the half court is the fourth largest in college basketball.

As ugly as those numbers are, there is a slight saving grace for John Beilein. Michigan can’t stop anyone on the fast break but it has done a pretty good job of limiting fast break opportunities. Just 21.3% of U-M opponents’ initial field goal attempts come in transition, the 31st best mark in college basketball.

That only minimizes a problem. Teams are going to run on the Wolverines and they need to do a better job of stopping fast break offense. Iowa State had 13 FGAs in transition (77 eFG%), Florida State had 16 (68.8 eFG%), Charlotte had 13 (54 eFG%) and Duke had 10 (75 eFG%). The majority of teams will be more effective in their transition offense but improvement in stopping fast breaks will pay dividends come Big Ten season.

Michigan has surrendered 36 points in 29 possessions of zone defense. That’s 1.24 points per possession, good for just the 6th percentile nationally. Michigan’s zone defense changed the game against Florida State but other than that has been woefully ineffective. The Wolverines are allowing just .741 points per possession in their half court man defense in comparison.

Michigan is forcing more turnovers (21% turnover rate vs. 17.2% TO Rate) with its zone defense but but opponents have a 77.5 effective field goal percentage and score on 55% of their possessions. Those numbers are ugly.

As ugly as the numbers are, they are also probably skewed to some degree. The 29 possessions of zone defense that Michigan has played have typically come against tougher opponents – Florida State, Duke, etc. – whereas the Wolverines have relied strictly on man-to-man in low-major blowouts. Still, the zone seems to be more of a psychological twist than an actual effective defense.

Individual defensive statistics are far from perfect but the Synergy Sports numbers are the most accurate numbers I’ve seen. Because Synergy logs every play, it assigns defensive blame to the primary defender on each field goal attempt or possession. The numbers grade out in a way that passes the eye test for this year’s group..

Robinson has been Michigan’s best defender by a wide margin, according to the numbers, and he’s been tested often but has held up fairly well. That’s an encouraging number for the Wolverines because Robinson faces his fair share of difficult defensive assignments at the four position.

The numbers are a bit ugly for Caris LeVert, Nik Stauskas and Spike Albrecht. LeVert has been tested more often than any other Wolverine, perhaps because he’s often matched up on the opponents’ best player, but he hasn’t been great. LeVert’s numbers are troubling because he allowed .883 points per possession last season as well and was among Michigan’s lower tier of defenders. Often praised by John Beilein for his defensive abilities, LeVert has the raw ability but needs to improve on his consistency on that end of the floor.

Zak Irvin, Mitch McGary, Jon Horford and Jordan Morgan all grade out well but have been tested very few times, implying that the Wolverines interior defense was been fairly sound. Michigan is surrendering .802 points per possession defensively on post-ups, 58th percentile nationally, despite opponents posting the Wolverines up on 12.7% of their offensive possessions. This interior defense will be tested against Arizona on Saturday.