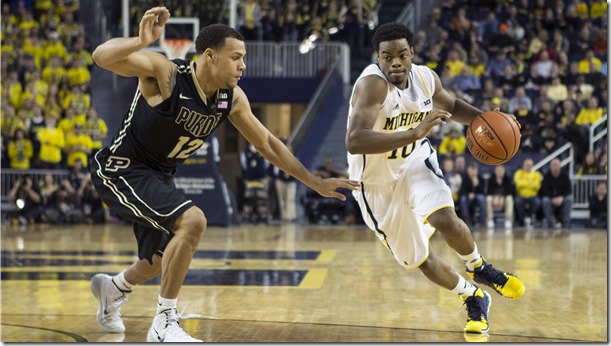 Michigan picked up its tenth win in ten tries on Thursday night with a routine victory over Purdue.

The Wolverines were clearly the better team, but never really quite rounded into gear. Despite Michigan committing a multitude of uncharacteristic turnovers, the Boilermakers didn’t have the determination, consistency or ability to provide a legitimate test. The nine point Michigan victory wasn’t as close as the final score indicated, but it wasn’t cause for celebration either.

The Wolverines gave the ball away on a quarter of their possessions, but were nearly unstoppable when they managed to hold onto the ball. Michigan shot 63% on twos and 54% on threes and kept Purdue at arm’s length throughout the night.

Caris LeVert led the way with his first career double-double with 14 points and 10 rebounds and he was joined in double figures by Derrick Walton, Nik Stauskas and Jordan Morgan.

Michigan managed to score 1.13 points per possession despite all of its turnover woes. Purdue forced the Wolverines out of their comfort zone a bit offensively with over-aggressive extended pressure. That led to the turnovers and also lower assist numbers. Just 10 of Michigan’s 28 baskets were assisted because the extended defense left a number of driving lanes for Caris LeVert and Nik Stauskas. It also led to a lot of wide open looks, free throw attempts, back door cuts and easy shots at the rim.

Purdue’s lack of shooting ability on offense was blatantly obvious. This was actually Purdue’s best offensive performance in the last four games at 1 point per possession. Michigan’s defensive rebounding performance was a bit disappointing, but that’s the one thing that Purdue does very well. The Boilermakers rebounded 40% of their misses and scored 19 second chance points. The Wolverines were beaten off the dribble badly a couple times early in the game, but for the most part were able to shore up those issues for long stretches.

While the middle of the Big Ten is nearly impossible to sort out, the top is clear. Michigan leads the way with Michigan State and Iowa on its heels. The Wolverines have another difficult hurdle ahead this weekend, traveling to Assembly Hall to try to knock off the Hoosiers.