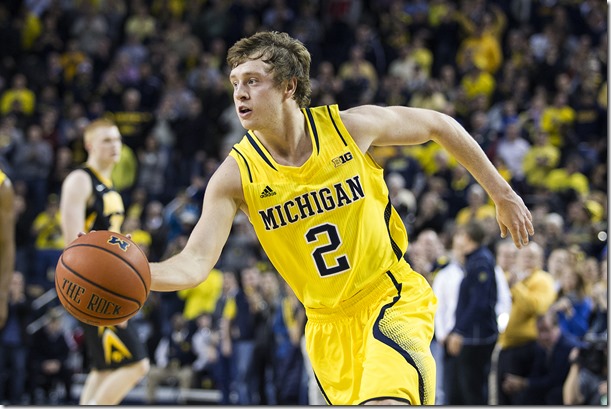 After last season, Spike Albrecht’s name was on the tip of the country’s tongue after hitting up supermodel Kate Upton following Michigan’s loss to Louisville in the national title game. The sophomore had a first half for the ages, scoring 17 points with a flurry of 3-pointers. His sophomore season ended less dramatically, but Albrecht still had a solid season backing up freshman Derrick Walton at point guard. The Crown Point, IN native wasn’t always productive, but was his usual reliable self in limited minutes.

More than his on-court exploits, Albrecht was a steady, solid leader for the Wolverines this season. The point guard sacrificed plenty, working extensively with Walton at the beginning of the season to get the freshman ready to play even though he knew it would mean fewer minutes for himself. Walton, after Michigan’s victory over Tennessee in the Sweet Sixteen, said it was Albrecht who traditionally calmed the team down in the huddle near the end of games when even John Beilein was getting frantic. Michigan has had plenty of talent come and go the past few years, but Albrecht is, and will continue to be, the consummate program player.

Quotable: Before the season started, John Beilein talked about two aspects of Albrecht’s game that sum him up nicely: “Spike right now – I think the other day he had 20 assists and two turnovers. I’m saying, ‘I’m still mad, Spike, about those two turnovers,’ because I thought they were turnovers that he knew better than to make. Spike’s teams traditionally win in scrimmages no matter who we put him with.”

Spike Albrecht showed flashes this season: against Arizona, at home versus Minnesota and seven assists when he got the start at home against Iowa were good examples. But with such limited minutes, he wasn’t able to show his ability on a consistent basis. It will be interesting to see how Albrecht’s career trajectory unfolds at Michigan, with Derrick Walton having locked down the point guard duties for the foreseeable future. Regardless, Albrecht is reliable, steady and a great leader – now the oldest player on Michigan’s roster. In a college hoops world that has John Beilein overhauling rosters every season, Albrecht is like the beleaguered coach’s security blanket.