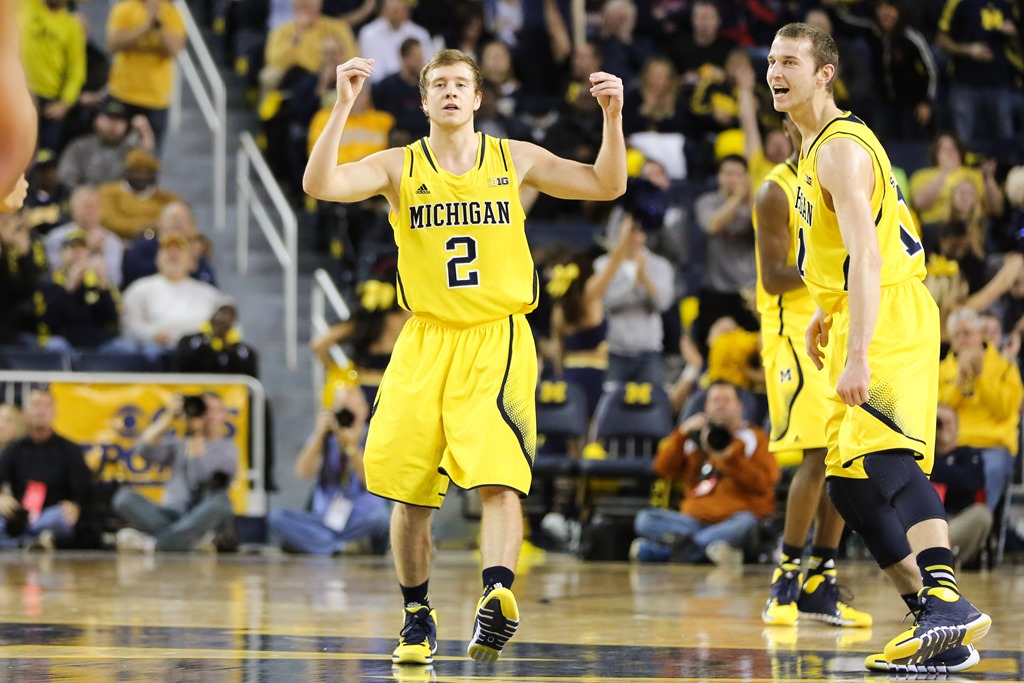 With the start of college basketball around the corner, we’re breaking down Michigan’s roster player-by-player. Today, we start with Spike Albrecht. (Photo: Dustin Johnston)

Last summer, Spike Albrecht spent the summer as something of a folk hero. He had exploded onto the national scene with his heroic 17 point performance in the championship game and he had asked Kate Upton out on a date and gained tens of thousands of Twitter followers.

With a freshman point guard coming into the fold, there was some speculation that Albrecht could push to start during his sophomore year. Instead, Derrick Walton won the job fair and square, as many expected. While Albrecht played more minutes as a sophomore, his role was still very similar to his freshman year. He came off the bench, ran the offense effectively and shot more than his fair share of threes.

Albrecht only reached double figures in one game, but he still had his moments, particularly the Iowa game where he got the start and led Michigan to a win in Walton’s absence. Now a junior, Albrecht is Michigan’s oldest player and ready to take on a significant leadership responsibility.

“Spike Albrecht at every point was the voice of the team,” Michigan assistant coach Jeff Meyer said in recollecting Michigan’s Italian tour. “He just took it upon himself. Certainly Caris, Zak and Derrick are right there. It certainly is a Mt. Rushmore in terms of this group moving forward with the leadership pieces.”

“The leadership right now of Caris and Spike has really been tremendous,” John Beilein said. “On the court those two have shown as good of leadership as we’ve had to this point. We’ve got a long season (ahead), but there is no question that they are in charge of this team right now.”

While Albrecht has taken over a leadership role, he’s also improved his game on the court as well. He showed off a number of his old tricks in Italy, but he also had a handful of nice floaters and driving layups, possibly a sign of things to come.

“He has had as good a fall as anybody that we’ve had,” John Beilein said. “I’d encourage him to shoot more. If anyone saw him at Crown Pointe, he was a scorer who could play point, not a point guard who could score.”

There’s little question that Albrecht will be a leader for the Wolverines this year, but the more interesting question is where he fits into the mix on the floor. John Beilein admits that Derrick Walton has made great strides this offseason, but he also seems to think that Albrecht will play a bigger role.

“We need him to shoot from deep and have that mentality that he had in that NCAA Championship game a little more, because we’re going to have to get scoring from different spots,” Beilein said. “He has really done a great job, and he’s playing every day against a young man in Derrick Walton who has made a great leap in his physical talent, his shooting ability and his understanding of college basketball.”

Albrecht made significant improvement in his ability to run an offense last season. As a freshman, his assist rate was 14.6% and his turnover rate was elevated at 21.4%, but as a sophomore those numbers were flipped. He increased his assist rate to 24.3% and trimmed his turnover rate down to just 13.6%. He had 25 games without a turnover including all of Michigan’s NCAA tournament games. As far as a backup point guards go, Albrecht was as trusty as can be.

While his ability to run the Michigan offense improved, he also went through a bit of a slump shooting the ball. Albrecht’s shooting line was just 53.2/43.8/38.7 as a sophomore, down from 62.7/38.5/54.5. While it’s almost impossible to keep up a three-point shooting percentage above 50%, Albrecht can shoot the ball better than 39% from long-range. Given his below average two-point shooting, Michigan needs Albrecht to continue to be a consistent deep threat.

“I focused on continuing to develop my body,” Albrecht said of his offseason. “I also continued to work on my offensive game, trying to stretch defenses with my shooting and things of that nature.”

Michigan lost 316 three-point attempts from last season and Albrecht could serve as a valuable option to stretch defenses. True freshman Muhammad-Ali Abdur-Rahkman is expected to be Michigan’s other backup option at the one and two positions and while he brings something that Walton and Albrecht lack (size at 6-foot-4), the biggest questions surrounding his game revolve around his long-range shooting.

Michigan has ranked 45th or higher in 3PA/FGA in six of John Beilein’s seven seasons in Ann Arbor and this year should be no different. Albrecht’s offensive spark could be a nice change of pace for Beilein to keep Michigan’s offense among the best in the country, especially after losing one of the best shooters in the country in Nik Stauskas.

Bottom Line: Albrecht isn’t going to change his game overnight, but he serves a role that’s important as any for for Michigan. The Wolverines are going to be a very young team once again and Albrecht’s leadership will be invaluable, especially at the point guard position. The more interesting subplot for Albrecht’s junior year is how Beilein chooses to use him, especially early on. The possibility of a two-point guard lineup with Walton and Albrecht is intriguing from an offensive perspective, but could also be weak defensively with two 6-foot and under guards to anchor the backcourt.