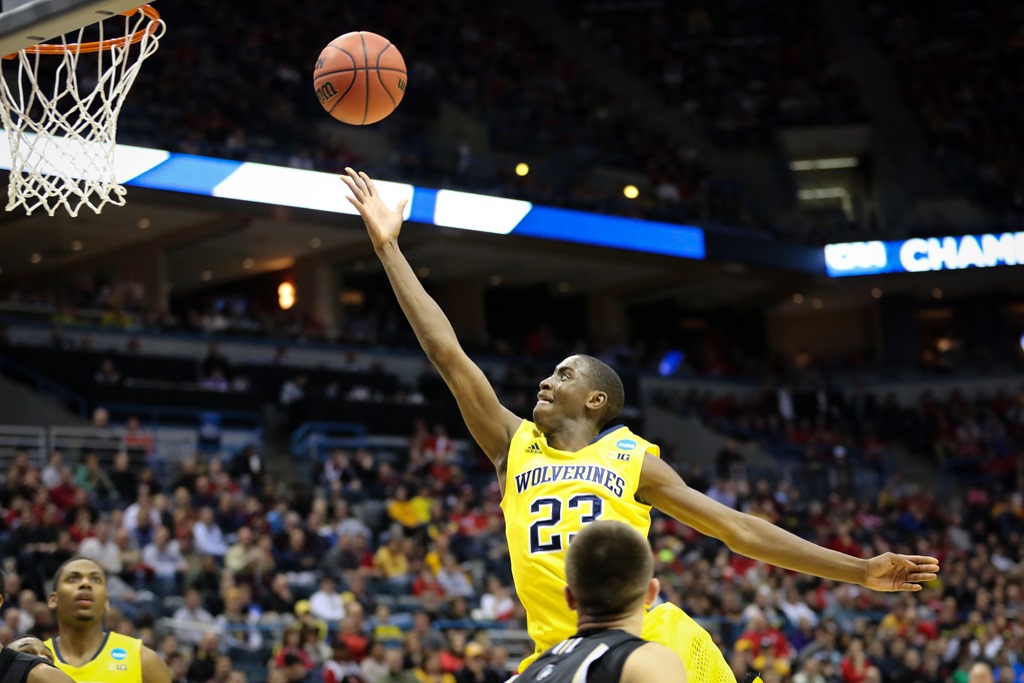 John Beilein, Caris LeVert, and Spike Albrecht were all in attendance to represent Michigan at Big Ten Media Day on Thursday morning. They were among the most popular groups at the event, fielding questions from reporters throughout the hour of availability.

ROSEMONT, Ill. — John Beilein, Caris LeVert, and Spike Albrecht were all in attendance to represent Michigan at Big Ten Media Day on Thursday morning. They were among the most popular groups at the event, fielding questions from reporters throughout the hour of availability.

Though Wisconsin is the unanimous favorite to win the conference, coaches and players alike asserted that several other teams, including the Wolverines, could compete for the Big Ten title. And given Michigan’s penchant to reload rather than rebuild under Beilein, the attention Thursday wasn’t much of a surprise.

Here’s what we learned from this year’s Big Ten Media Day.

Beilein has maintained that achieving success is difficult, but sustaining it might be harder still.

For the Wolverines to repeat as Big Ten champions, they’ll need to find a way to replace the bevy of talent that left after the 2013-14 season. And that means some of the burden will fall on Ricky Doyle, Kameron Chatman, D.J. Wilson, Aubrey Dawkins, and Muhammad-Ali Abdur-Rahkman, the freshmen most likely to contribute immediately.

“This could be three, four, five guys are going to play, and they’re first-year players,” Beilein said. “We have to get them ready.”

While the freshmen will likely see time in what should be straightforward wins in mid-November, the coach said several could be on the court against marquee non-conference opponents Syracuse and Arizona as well.

But no one expects Chatman to reproduce Glenn Robinson III’s 13 point and four rebound averages from 2013-14. And while Doyle can operate with his back to the basket better than Jordan Morgan and Jon Horford could, that doesn’t mean the freshman is necessarily ready to dominate games at the five.

Much like Derrick Walton and Zak Irvin matured throughout last season, Michigan’s freshmen may be a strong point of the team come Big Ten play. But, like 2013-14, that process could involve some frustrating early results.

“We hope that this team is growing, and our growth has to come a bit more quickly than probably we’ve had to have in past years,” Beilein said. “These freshmen, I really like them, and I think they have great potential, but we’re probably going to have to play more than we normally have. And that’s a good thing for them, but there’s going to be growing pains.”

Caris LeVert is ready to lead this team

What made Nik Stauskas so good last year?

According to Beilein, some of the guard’s motivation to improve stemmed from a fear that LeVert might overtake him as a starter. Stauskas proceeded to earn Big Ten Player of the Year honors before jumping to the NBA.

And LeVert? At this point last season, he says, he didn’t even know what his role would be on the team. But this year, he’s not nipping at anyone’s heels. He’s a leader and one of the conference’s most talented players, and he knows it.

“The opportunity is going to present itself for me to have the ball in my hands a little more this year,” LeVert said. “I’ve really prepared myself for that, the coaches have prepared me for that and placed a big responsibility in my hands with that. I’m ready to handle that aspect of the game.”

Last year, LeVert impressed Beilein through his versatility to handle different responsibilities on a game-by-game basis. Now, the guard understands his role, and that’ll give him ample chances to showcase his improvement.

Chatman has a ‘great chance’ to start

Before this summer’s trip to Italy, Beilein praised how quickly Chatman was learning and his understanding of the game.

Though the freshman struggled with his shot overseas, he has shown enough to be a day-one starter.

“He’s got a great chance to start at one of our forward positions,” Beilein said. “He is really a very natural ballhander and has really proven to be a good shooter thus far. I am very optimistic he can give us quality minutes from the very beginning.”

Though Chatman is projected to fill Robinson’s vacancy at the four, Beilein explained the freshman could potentially be better suited for the three. Zak Irvin would fill the other forward position.

“We’ll know who is comfortable in a lot of the actions that we run,” Beilein said. “You are who you can guard. So we have to see who can guard other players, quicker players, inside players. That will determine some things as well.”

In that aspect, Chatman might be a defensive liability facing power fours. But Beilein said the freshman “has great potential” and that he’s improving physically daily.

“He’s not afraid to go in there,” Beilein said. “He has great hands and instincts for the ball.”

Defense could be an early issue

The Wolverines posted the best offense of the Ken Pomeroy era last year, leading the nation in adjusted offensive efficiency for the second consecutive year.

While Beilein may not care about the record, he does know Michigan will need to keep scoring a lot of points, especially as freshmen make the transition to college ball.

“Defense is very difficult for young teams to learn,” Beilein said. “While you’re teaching that and growing in that area, you need to be scoring points to win.”

The Wolverines finished 109th overall in adjusted defensive efficiency last year, per KenPom, making them the worst defensive team that Beilein has had at Michigan.

Though Michigan’s run to the Final Four in 2012-13 was a defining moment for the program under Beilein, that year’s NCAA tournament success may have made last season’s Elite Eight knockout a little more painful.

After reaching the Final Four for the first time, Beilein can’t wait to make his return.

“I’m as hungry or probably hungrier than ever to get back there,” he said.

Albrecht, one of just three remaining players from the 2012-13 squad, agreed that the Wolverines’ week in the national spotlight still serves as motivation. And he doesn’t mind that Michigan is considered somewhat of an underdog in the Big Ten.