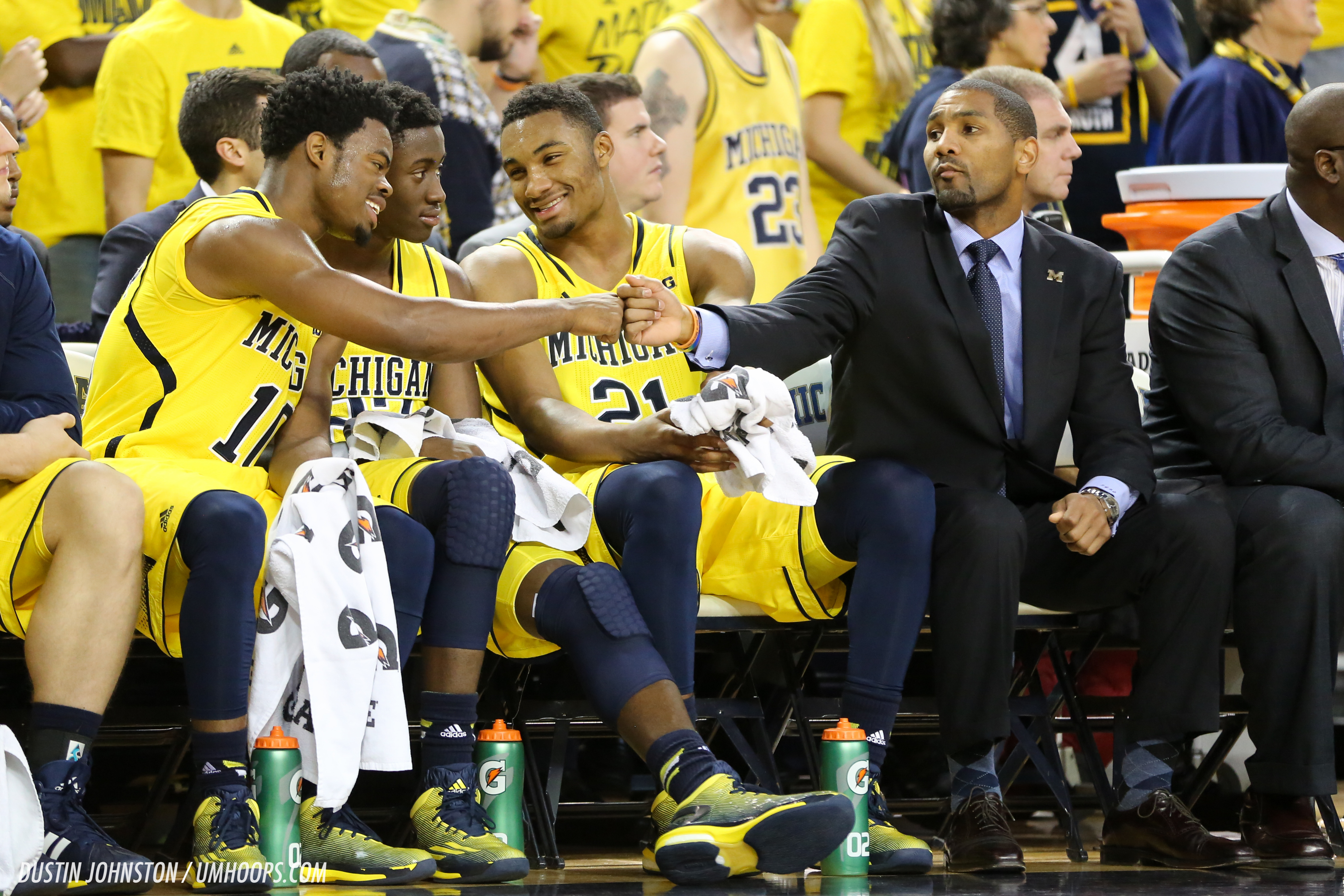 And while the Wolverines pulled away with ease, the Chargers provided an early scare in the first half. Though Michigan had no difficulties picking apart Hillsdale’s defense, it became apparent that the team isn’t relying on its freshmen — at least, not yet.

“That is the puzzle of, don’t lose sight of the really good players as we develop the young kids,” said John Beilein. “You have to continue to feed Caris and Zak and Spike and Derrick. So much reinforcement and individual development while you’re also trying to get the other guys just to land on two feet sometimes when you go strong into the lane.”

Kameron Chatman, who started and saw the most minutes of the freshmen with 30, didn’t do himself any favors, finishing just 1-for-7 from the field. Meanwhile, no other newcomer had more than two field-goal attempts.

“It’s kind of a game-time thing,” LeVert said. “We got some looks out there, and I got some easy shots. Got out in transition a lot, too.”

The junior added the discrepancy with the scoring outputs was a result of inexperience, saying the freshmen were “getting their feet wet.”

Spike Albrecht played 16 minutes, several of which came alongside Walton. Beilein has said that lineup helps get Michigan’s best players on the court, and he explained Saturday that it also puts as much experience on the floor as possible. Albrecht finished 2-for-7 from the field but dished out two assists and had a pair of steals.

“If you look at our team and the way the starting lineup is, 40% of it is playing in their first game,” Beilein said. That’s almost half the team. Anytime we can get Spike in with (Walton), we up that to 60%.”

LeVert, who finished with nine assists to complement his 20 points, said he expects the freshmen to participate more as the season progresses.

Until Michigan established Mark Donnal as an inside presence midway through the second half, it relied on its outside shooting in the offensive outburst over Hillsdale.

And the Wolverines were deadly from outside, picking apart the Chargers’ defense and going 11-for-19 from beyond the arc — mostly with clean looks.

48% of Michigan’s offense came from outside, but that didn’t seem likely early on. It started the afternoon 0-for-3 from three on two misses by Irvin and one by LeVert and didn’t hit a trey until Walton sank one with 15:41 to go in the first half.

Then, the floodgates opened. The Wolverines made three of their next four attempts from outside, tying the game at 15 with 13 minutes to go in the first half. Michigan didn’t look back from there, taking a 50-33 lead into halftime.

Even freshman Aubrey Dawkins joined the parade, nailing his only attempt of the night just 21 seconds after being subbed into the game midway through the first half.

The Wolverines had a streak of five consecutive made three-pointers between the end of the first half and the start of the second.

“As a first game, the young guys and myself didn’t want to come out and be too excited and make careless mistakes,” Walton said. “I think we kind of sat back and they hit us in the mouth.

“After the first TV timeout, we got to our normal game and pressured them … and it started to generate easy points for us.”

Before Saturday’s game, Beilein handed Big Ten championship rings to members of the 2013-14 squad, and the program raised its third banner to the rafters of the Crisler Center in as many years.

But when it came to delivering the coach’s ring, the public-address announcer said it would be presented to him by Michigan’s captains, LeVert and Albrecht.

After the win, Beilein confirmed the news.

“They will be captains all year long, those two,” he said. “We had a team vote which was practically unanimous, and the coaching staff was unanimous too. So we’re really excited about those two guys leading us.”

“Neither one are ‘holler guys’ now, and that’s something that we’re teaching them.”

The news comes as no surprise — even in Big Ten Media Day in October, Beilein named LeVert and Albrecht as the team’s best leaders.