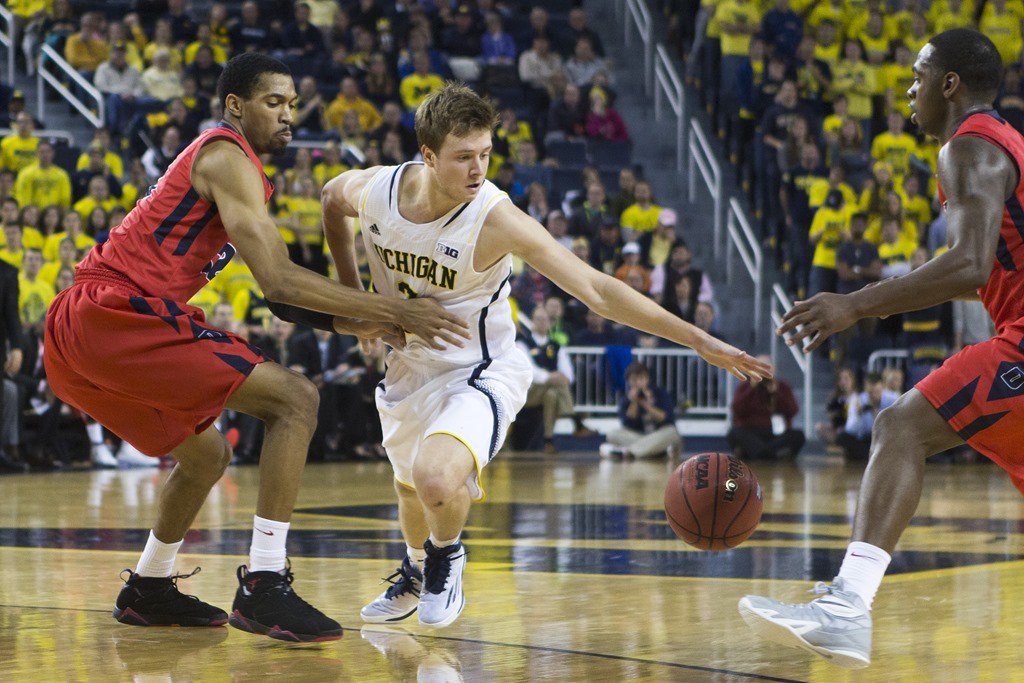 When Michigan needed a spark against Detroit on Thursday night, it didn’t turn to Kameron Chatman or Aubrey Dawkins, its two most athletic freshmen. The Wolverines didn’t look to Mark Donnal or Ricky Doyle, either.

In fact, they didn’t rely on any of the freshmen. Instead, they put the game in the hands of their veterans: the reliable core of Caris LeVert, Zak Irvin and Derrick Walton, the improvisation of Spike Albrecht and the disciplined understanding of Max Bielfeldt.

And when the Titans took a four-point lead early in the second half, that group got to work. Albrecht assisted on a Bielfeldt layup, then LeVert got a steal for an easy bucket, then Albrecht dished to LeVert for a three-pointer — and then again for a layup.

After going down 34-30, the Wolverines went on a 13-0 run, holding the Titans scoreless for more than five minutes of game time.

“Coach Beilein just went with the veteran group. We’re a little more comfortable. These guys know the system a little bit more, the defensive concepts, things like that,” Albrecht said. “I like playing with those guys. We all have the chemistry.”

Though Albrecht and Bielfeldt began the game on the bench, both played more than their starting counterparts — especially in the second half. The junior guard got 32 minutes while Chatman had just 10, and Bielfeldt earned 20 minutes to Donnal’s 15.

“I didn’t like the way the second half started,” John Beilein said. “I just felt that they were going to come out of halftime and just go after us, and we needed to withstand it.

“We thought we were poised, but we weren’t. We just got sped up.”

While Bielfeldt was solid in the post, seemingly having a much better grasp of offensive sets and rotations than his freshmen counterparts, Albrecht impressed the most of the bench players. Part of that came from his confidence; this week, as he has all season, Beilein stressed that Albrecht must shoot open looks from beyond the arc.

And with 10:28 to go in the game, the guard snapped out of his 0-for-5 slump from three-point range to start the season by nailing one, holding his follow-through a little longer than usual as if in celebration.

“I would say that was relief,” Albrecht said. “One of the things I’ve been working on with my shot — I haven’t been holding my follow-through as long. … I think it was a little bit of a relief when I finally made one.”

But Albrecht wasn’t done, and neither were the veterans. With five minutes left, when Detroit’s Juwan Howard Jr. — son of Fab Five star Juwan Howard — tied the game at 52, the Wolverines proceeded to score the next 11 points, courtesy of buckets by LeVert, Irvin and Walton.

Then, with 1:27 remaining, Albrecht drilled a three-pointer over Howard to finally put the game out of reach.

“That’s the one things coaches always say: ‘If you’re open, shoot it. Have confidence in yourself,’ ” Albrecht said.

While yes, it was troublesome to see the freshmen struggle so mightily Thursday facing a team of Detroit’s caliber, it gave some of Michigan’s bigger names a chance to show why they’re stars. LeVert finished with 21 points and Irvin had 18. And Albrecht made the most of his increased playing time, combining his six points with four rebounds, four assists and a steal.

It wasn’t so much the numbers but the way in which he got them. Albrecht impressed with plays such as his perfectly weighted pass to Bielfeldt for a layup, or the time he dove to the court to save a loose ball, or when he pulled out the backyard moves with a nifty behind-the-back pass to Donnal in transition.

And if he can start getting hot from three, the tradeoff in size by running him alongside Walton might seem minor in exchange for the wealth of offensive possibilities he presents.