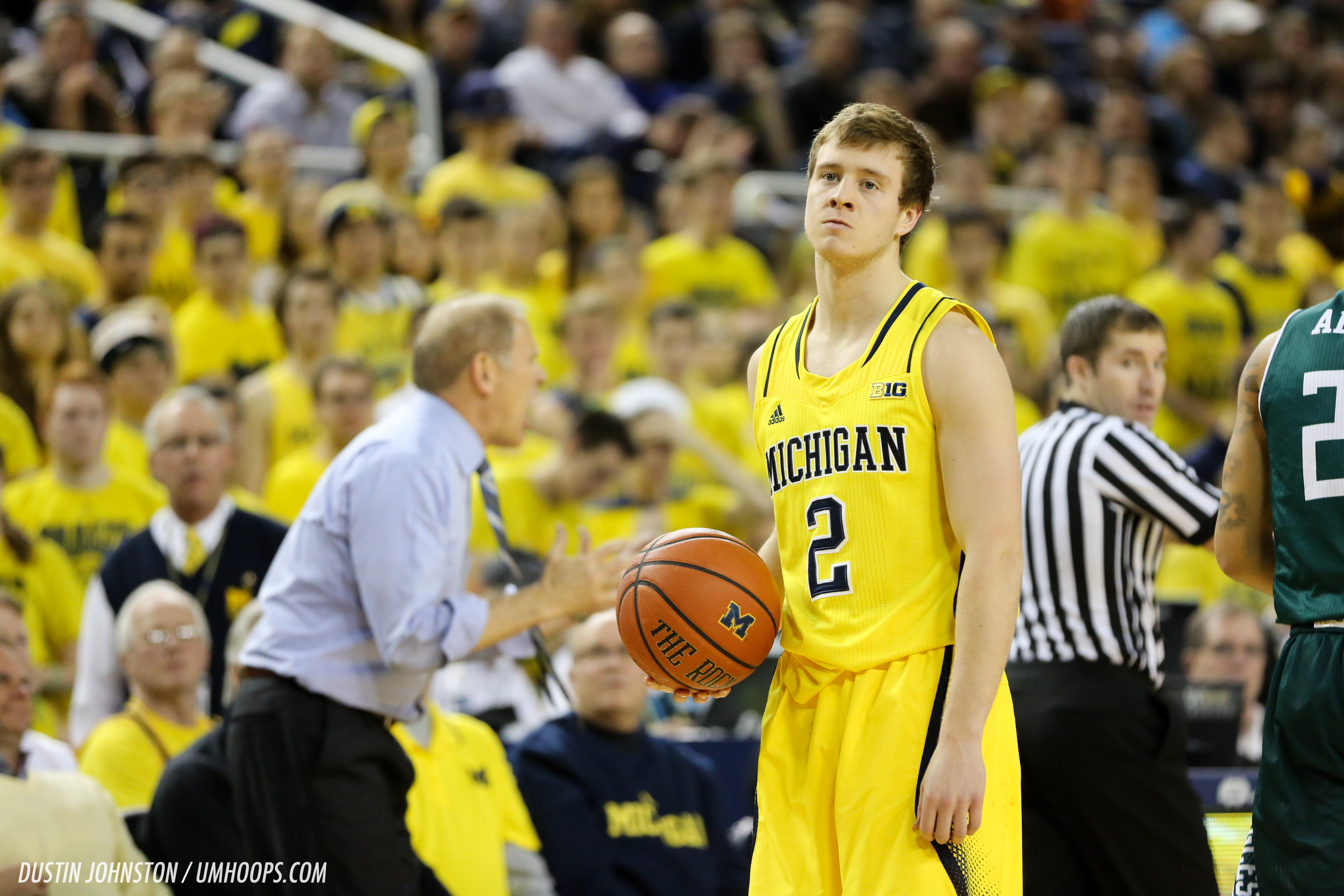 Instead of choosing to operate on the injury during the offseason, Albrecht opted to “delay it and do as best he can with it this year,” Beilein explained. However, surgery is an option the guard will revisit after the season ends.

Spike Albrecht didn’t score a single point in 26 minutes during the loss to Eastern Michigan on Tuesday. Now, we know why.

The junior guard has been suffering from an unspecified lower-body injury sustained about a year ago, he explained Thursday. Though it hasn’t prevented Albrecht from playing, it could nag him throughout the rest of this season.

“He just got hit the other day, so it bothered him the whole second half,” said John Beilein.

Instead of choosing to operate on the injury during the offseason, Albrecht opted to “delay it and do as best he can with it this year,” Beilein explained. However, surgery is an option the guard will revisit after the season ends.

“It’s something I’ve been dealing with all year”

But for his part, Albrecht isn’t blaming the injury for his uncharacteristically poor play against Eastern Michigan, which included a costly turnover with less than a minute remaining.

“It’s something I’ve been dealing with all year, but just continue to work with [athletic trainer John DoRosario],” Albrecht said. “Treatment, maintenance, things of that nature.

“It doesn’t necessarily limit me that much. I’m not going to make any excuses for the way I’ve been playing or anything like that. It’s just been a nagging thing that I’ve been dealing with, and I chose to tough it out this season. That’s what I’m going to do.”

The guard explained that the injury isn’t something that would be healed in the short term with rest.

“It’s probably something that I’ll take care of after the season,” he said.

Besides the Eastern Michigan game, the injury hasn’t seemed to affect Albrecht’s game too much this year. He’s averaging 5.6 points and 3.9 assists per game — with a clutch 11-point, nine assist night against Syracuse — as Michigan’s backup point guard.

Albrecht isn’t even the only injured Wolverine at his position, as Derrick Walton is still recovering from a sprained toe.

“When your two point guards are banged up, it could impact you,” Beilein said. “We’ve got to find a way.”

Michigan has had a pair of games away from the Crisler Center, but it certainly didn’t have a lack of support during the Legends Classic in Brooklyn.

The circumstances will be different Saturday when the Wolverines travel to face No. 3 Arizona, where, as Albrecht explained, “everyone is going to hate you.”

But the veteran guard said he can’t help prepare his teammates for the difficult environment — words simply don’t do justice to the level of hostility faced away from Crisler.

“I can talk to freshmen, this and that,” Albrecht said. “You just have to go out there and get the nerves out early on. It’s a lot of fun.”

Beilein said Thursday’s practice will incorporate “loud noises” in order to prepare for the road test. The coach added that he hopes the McKale Center will help his young team grow accustomed to “fight off all those distractions” it will face on a regular basis during Big Ten play.

“You just never know who’s going to do things on the road,” Beilein said. “Some of the guys you see that you think they’ll go on the road and might really be affected by the environment perform pretty well. Other ones you think just have all kinds of swag going into that game get hit in the mouth and it takes them more time.”

Beilein to work one-on-one with Irvin

Over his last two games, Zak Irvin is shooting just 5-for-23. He has recorded just two free throw attempts and only one assist in the four games since the Villanova loss.

Irvin may have improved his athleticism from last season, but he’s still having difficulties expanding his role as a starter at the three. When he has poor shooting nights, his one-dimensional nature has become somewhat of a hindrance.

“We all have certain areas we’re really trying to improve on,” Beilein said. “He’s working really hard to improve at getting to the foul line, seeing the open man, defending better. When he doesn’t have a great night shooting — which a lot of shooters will have — you’ve got to focus on those things. And that’s all part of the process for a player that played 10 minutes a game last year.”

Beilein said he and Irvin will watch game film together during Thursday’s practice and that the guard will spend extra time working on his shot. However, the coach said any major changes might have to wait until after final exams end next week, when the Wolverines will be able to practice longer and will have more days between games.

“You don’t touch on it too much when you have a lot of games in a row,” Beilein said. “You just have to wait for it to happen.”