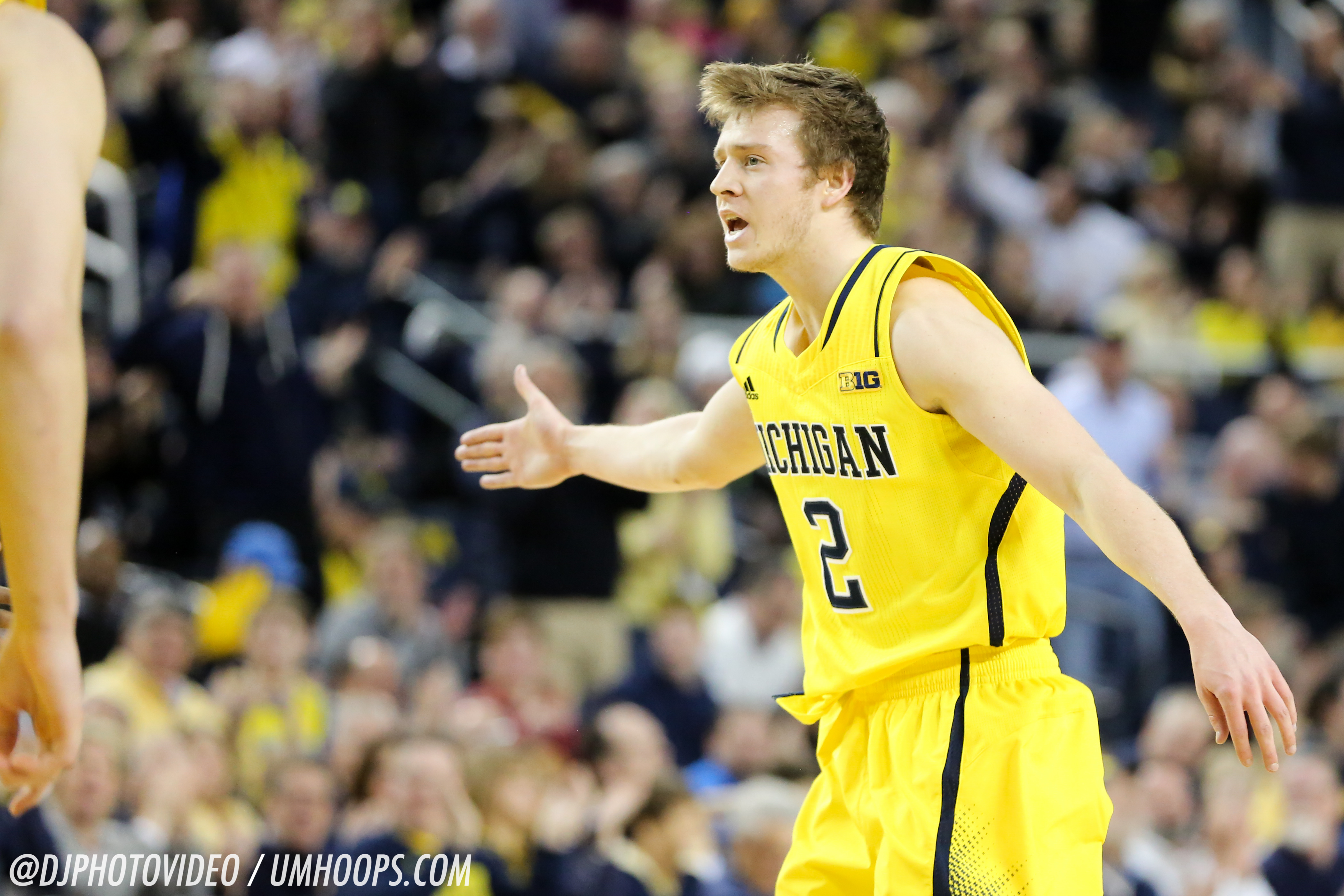 In this edition of the UM Hoops mailbag we look at Spike Albrecht’s three-point shooting, Muhammad-Ali Abdur-Rahkman’s isolation ability, what Michigan has to do to make the NIT and more.

@jackfl33: I have a theory that Spike is an above the break 3 pt shooter almost exclusively. Does his chart show that?

In a word, yes. Only 20% of Spike’s three-point attempts this season have been from the corners and he’s shooting just 14% on those attempts. From above the break, he’s a much more respectable 41%. His shot charts over the last two seasons from ShotAnalytics show a similar trend last season as well.

This isn’t uncommon for point guards as they usually are facilitating the offense above the break and rarely are camped out in the corner waiting for drive-and-kick opportunities. It’s no secret that Spike Albrecht’s favorite play is the baseline drive and baseline kick out – but he’s rarely on the other end of that one.

I feel pretty confident in saying that Michigan is throwing everything at Muhammad-Ali Abdur-Rahkman that he can handle right now. He’s growing as a player every game and while he’s shown great potential as a pick-and-roll and isolation guard, he’s also not mature enough to run much more offense than he’s currently running.

The best thing Abdur-Rahkman has done this year is play well enough to get on the scouting report. Teams know that he’s quick, can put the ball on the floor and finish at the hole – but they also know he can’t see the whole floor.

He made 20 of 33 twos over a six-game stretch spanning from late January into early February. During that same stretch he handed out just four assists to five turnovers in 132 minutes.

Since then, teams have adjusted and have prevented him from scoring at the basket (6 of 14 on twos, 14 turnovers since), but he’s slowly starting to pass the ball more. As he sees the floor more effectively and becomes more reliable, we’ll see John Beilein dial up more and more opportunities for him to create.

The win over Ohio State certainly helped. Finishing over .500 isn’t a requirement for making the NIT, but it’s rare for a team with a losing record to earn an invitation. These days the NIT is a 32 team tournament with brackets seeded 1 through 8.

The brave souls that project NIT brackets seem to think Michigan would check in around a 6 seed right now.

It’s also important to note that there is a NIT bubble that will shrink during the conference tournament season because any team that earns a No. 1 seed in its conference tournament and doesn’t win the tournament earns an automatic bid to the NIT. There are generally around 10 teams in that group, meaning the 6, 7 and 8 seeds in the NIT projections shouldn’t get too comfortable.

To make a long story short, Michigan probably needs to win two or three more games to lock down a winning record and have a good shot at a NIT berth.

@nezzy21: Any rumblings on Duncan Robinson potential or expected impact next year.

Robinson has earned a lot of public praise from John Beilein this season during his press conferences and radio shows. Beilein told reporters that Robinson hit 10 straight threes in practice, played D’Angelo Russell on the scout team and even thanks him after every practice. Robinson also broke Nik Stauskas’s shooting record in practice back in December.

There doesn’t seem to be much doubt that Robinson will be the best shooter on the roster next year and that’s a big boost for Michigan’s worst three-point shooting team since 2010. I would expect Robinson to be a rotation player and his comfort in the offense — he played it at Williams and has had a year of practice under his belt — should lead to a seamless transition.

It’s no secret that Kam Chatman’s freshman year has been disappointing, but I think there are some attainable and realistic improvements that he can make this season.

First off, the jump in competition was especially steep for Chatman. He played small school basketball in Oregon and didn’t play his junior year due to a transfer ruling in California. While he did play on the Nike EYBL circuit, he didn’t play on a great team and was forced to do just about everything — a role that he doesn’t really translate to the college game.

Chatman still tries to take far too many shots that might have been acceptable or possible in high school, but just don’t work at this level. A year of strength and conditioning should improve his ability to keep up with the pace of play at the Division I level and start to let the game come to him.

It’s also very hard to step into the starting lineup as a freshman and fit in on a team with high expectations. We saw Darius Morris go through a similar struggle during his freshman year, although it wasn’t nearly as pronounced. Morris came to Ann Arbor touted as the missing piece. He was a day one starter who was then benched midway through the season as Michigan struggled. Morris managed an offensive rating of just 88.7 as a freshman. A year later he was a pro.

Chatman’s offensive rating of 78.2 is even worse than Morris’s, but seeing a West coast kid make a massive sophomore leap wouldn’t be unheard of in Ann Arbor.

@TigsTown: Does Michigan end up adding anyone to the class of 2015?

Recent history tells us yes. Last year at this time, Michigan was just discovering players like Muhammad-Ali Abdur-Rahkman and Aubrey Dawkins, who both ended up in the class. There are also options that the Wolverines have been recruiting for a while.

Michigan is playing catchup with five-star wing Jaylen Brown, but he still plans to take an official visit to Michigan so the Wolverines will have the opportunity to make their mark.

Four-star guard Jamal Murray is still in the class of 2016, but many expect him to follow a similar path to Dillon Brooks. Brooks reclassified last summer, enrolling at Oregon after playing through the summer AAU period with CIA Bounce. John Beilein recently watched Murray play and Oregon, Michigan State, Illinois and many others are involved in his recruitment.