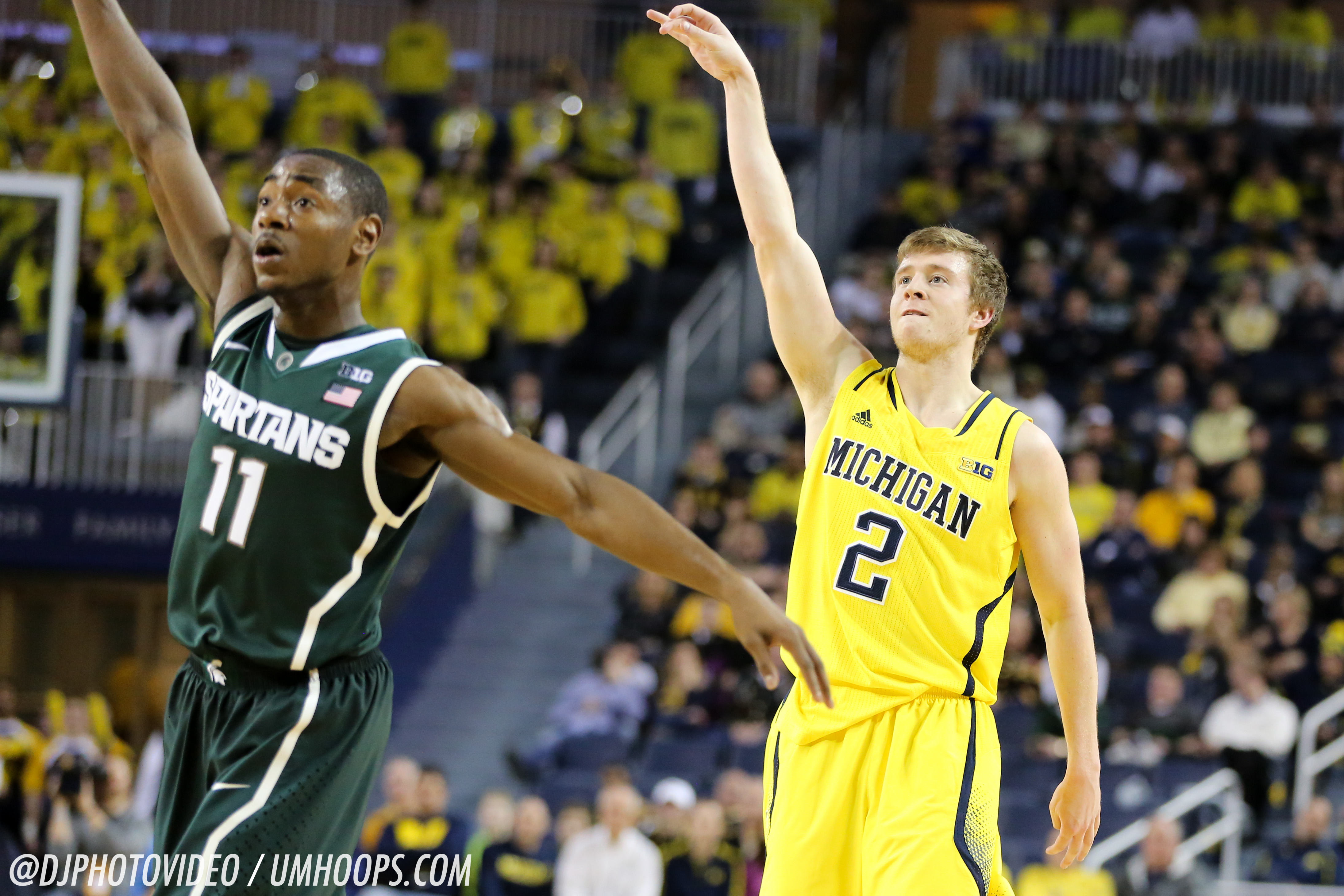 It took a while, but over the last month of the season Michigan finally rediscovered its ball screen offense. Even without the two players it expected to carry the load in 2014-15.

It took a while, but over the last month of the season Michigan finally rediscovered its ball screen offense. Even without the two players it expected to carry the load in 2014-15.

For an array of reasons, Michigan’s ball screen game – which had been among the best in the country over the last three seasons – never got into gear early on this season. Caris LeVert struggled to knock down off the dribble mid-range jumpers and Derrick Walton’s poor finishing at the rim was magnified when a foot injury derailed his season in the fifth game of the year.

Michigan scored just .867 points per possession on pick and roll possessions over the first 20 games of the season. The offense was sputtering and the losses piled up quickly. Michigan’s pick and roll offense was ranked just ninth in the Big Ten at that point. News that Caris LeVert and Derrick Walton – the team’s two top creators on paper – would be sidelined indefinitely only added insult to injury.

Life hasn’t really been any easier without LeVert and Walton, Michigan is just 4-8 without LeVert, but the dire circumstances provided an opportunity for Spike Albrecht, Muhammad-Ali Abdur-Rahkman and Zak Irvin to improve in a hurry.

Since that trio took over the reins and started running Michigan’s offense, the Wolverines have boasted the conference’s second best ball screen offense.

Here’s a look at how Michigan’s ball screen efficiency improved over the last ten games, as compared to the rest of the conference’s final results.

While Albrecht, Irvin, and Abdur-Rahkman didn’t have the same volume as some of the elite pick and roll players in the conference – partially because their heavy usage came only in the final third of the season — they also graded out very well compared to the rest of the league. Among players with at least 50 ball screen possessions (including passes), only Traevon Jackson (who was the only player more efficient that Muhammad-Ali Abdur-Rahkman).

All three of Michigan’s ‘new backcourt’ were significantly more efficient in the pick-and-roll game than the players whose roles they replaced, Caris LeVert and Derrick Walton.

John Beilein commented a few weeks ago that Spike Albrecht was never recruited to be a guy that you just hand the ball to and let him run ball screens, but he’s doing a pretty good job of it.

Albrecht, unlike the other two guards on this list, still has a pass-heavy split. 60% of his ball screens are passes and 40% are shots, but as the season has progressed he’s been more aggressive looking for his own offense.

Albrecht shoots 40% on above the break threes and he’s been consistent with his jumper off the dribble over the last month.

We’ve seen an incredible growth in Zak Irvin’s game. He’s ran 87 ball screens this year and created 85 points. He still almost always dribbles off the pick and attempts an off the dribble jump shot, but he’s added the ability to pass the ball into his repertoire.

In first two months of the season, Irvin had made just five passes in the pick and roll game. In the last two months, he’s made 28. Irvin’s 16 pick-and-roll assists this season aren’t necessarily setting the world on fire, but they are an important first step in his development. Remember, this is the same player who recorded just 13 assists total in his freshman season.

At the season’s mid-way point, Irvin looked like a player that was stuck in neutral. He was taking bad shots, missing open ones and allowing that to effect his play on both ends. A couple months later, and the promise is clear. Irvin is sticking mid-range jumpers, making reads and starting to find himself in the offense.

Do you think opposing defenses are overplaying Abdur-Rahkman to shoot? Michigan is scoring 1.74 points per possession when Abdur-Rahkman passes out of the ball screen, but he’s found the roll man just twice. Teams are selling out to stop the 6-foot-3 freshman’s drive and his ability to improve in the passing game will be critical next season.

Abdur-Rahkman has passed to the roll man just twice this season, both resulting in scores. Compared to the 31 possessions he kept the ball and 17 he kicked the ball out to spot-up shooters, he’s a very easy scout.

John Beilein and his staff have found promise in Irvin, Albrecht and Abdur-Rahkman, but the other glaring issue is figuring out why Caris LeVert and Derrick Walton struggled in the ball screen game this season.

Michigan’s new creators might never be its primary offensive creators in the future, but they skillset they’ve developed will be invaluable.

Albrecht will probably never play the same kind of minutes again in his career – he’s averaging 38.4 per game over the last ten games – but his game has matured to the point where he’ll be an important weapon for the Wolverines next season. Albrecht can stick threes off the ball screen, finish his fair share of circus shots at the rim and he’s learned to distribute the ball more efficiently from the pick and roll action. He’ll always be something of a weakness defensively, but throwing out a lineup of shooters like Dawkins, Irvin and Robinson along with Albrecht next season could make for a potent offensive look.

Abdur-Rahkman and Irvin’s improvements are potentially more significant for the Wolverines’ future. A month ago I was worried that Irvin’s game might have plateaued, but the light appears to finally be clicking. If Caris LeVert opts to enter the NBA Draft, it is very possible that Irvin and Abdur-Rahkman could take on similar, but maybe not nearly as significant, roles next season.