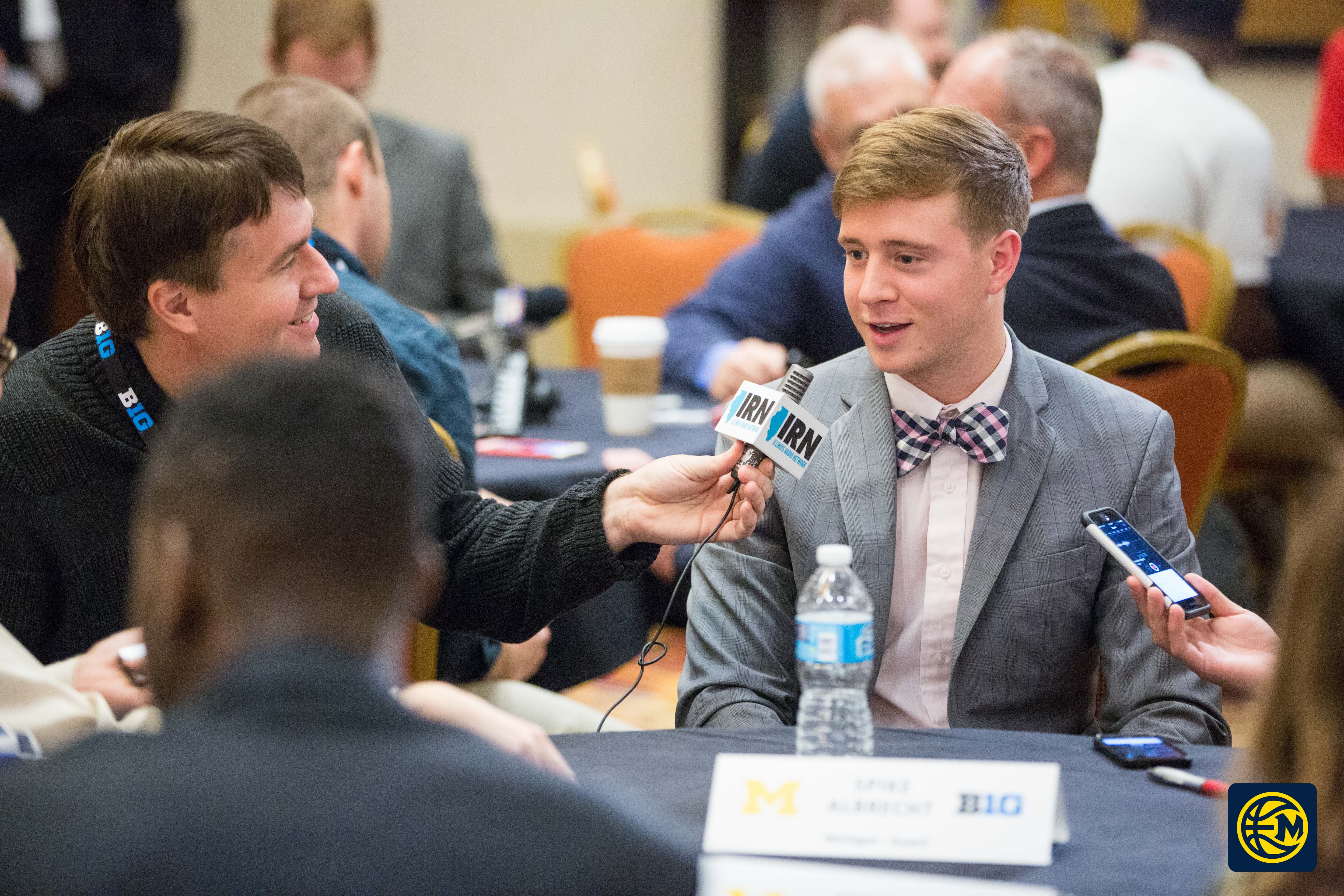 Whether it made sense at the time or not, Michigan coach John Beilein has always trusted Spike Albrecht.

He trusted that — despite never seeing Albrecht play in person — the 5-foot-11 recruit whose only other Division I offer was Appalachian State could find a way to win and succeed at Michigan.

The trust was there in Albrecht’s freshman season, when the gently-used backup heard his name called in the NCAA Championship to replace the National Player of the Year (Trey Burke) in the Wolverines’ biggest game in two decades — and responded with a career-high 17 points.

And that trust has only grown since, as Albrecht enters his second season as team captain, and finds himself with the keys to drive Michigan as far as he can, one last time.

“There’s a lot of point guards, they’re good, but they don’t see things like Spike,” Beilein said. “This kid is something special. Given the package that he comes in — his size, his strength, those things.

“It’s his own work habits, the strength he has from his family and him working really hard with a chip on his shoulder, ‘Yeah, I can play in the Big Ten,’ when nobody probably believed that.”

Though Albrecht, along with fellow captain and senior guard Caris LeVert is the undisputed leader of the Wolverines, questions remain about his contributions to the team on the court, especially as Albrecht still recovers from hip surgery.

Albrecht does not possess the same NBA skillset that LeVert does, but he isn’t a coach, either. If the Wolverines want to be successful, Beilein’s continued trust will need to translate into more on-court production. Stability off the bench

It’s not a given that Albrecht will come off the bench in 2015-16, but with Derrick Walton Jr. fully healthy and Muhammad-Ali Abdur-Rahkman continuing to develop, it’s hard to imagine Albrecht being the go-to point guard this season.

But that’s not to say he can’t be.

“I could have seen him being the voice of the team all four years because he’s got some great leadership qualities,” Beilein said. “I could not have foreseen Ohio State at our place almost in a box of one to deny Spike Albrecht. He became so key, we lost Caris and we lost (Walton), another passer, he was our only passer, and so as a result if you could stop him, you could stop Michigan.”

By the end of last year, that was true. At one point in time Albrecht even ended up throwing an alley-oop to himself on a crazy drive at Illinois.

That’s a huge bonus for the Wolverines, as Albrecht showed he’s more than the typical backup point guard in his extended time last season. As a junior, Albrecht was 10th in the Big Ten with 3.9 assists per game and led the conference with a 3.0 assist/turnover ratio. That mark was also good for 15th in the nation.

Coupled with a 91.3 free throw percentage last year, it is easy to remember why John Beilein trusts his senior point guard. Albrecht might come off the bench this year, but it’s hard to imagine that he doesn’t play important minutes of big games.

He even emerged as one of the Big Ten’s best ball screen players, grading out better in efficiency than just about anyone in the conference including his teammates like Zak Irvin, Derrick Walton and Caris LeVert.

Like all of Michigan’s core players, Albrecht caught the injury bug, playing hurt for much of the season before undergoing a hip surgery on his right side in April and another one on his left in May.

Unable to practice in full until mid-September, Albrecht missed the bulk of the highly-touted “Camp Sanderson” offseason program, where the team underwent intense training without its captain. Even after two offseason surgeries, it was a pain Albrecht wasn’t quite ready for.

“The physical rehab itself was tough, it was a grind,” Albrecht said. “But being a leader on the team and not being able to be out there with the team was brutal. After the season we had last year I wanted to be out there and push everyone and help everyone grow and I wasn’t able to do that.”

Albrecht says he’s been practicing in full since mid-September, and doesn’t expect to have to shake off much more rust before the Nov. 13 season opener against Northern Michigan. Beilein, however, knows there are many steps to coming back from surgery.

“He’s not where he probably was when he was playing at his best,” Beilein said. “The hip surgery is still maybe restricting him a bit more than it will in another month. It’s not injury, it’s just flexibility and soreness that he’s getting rid of.”

On the other hand, Albrecht was clearly playing injured in 2014-15. He struggled to move around after games and had a constant grimace on his face. The idea of finally playing healthy during his senior season could be a benefit down the stretch as his mobility improves.

Though Albrecht has impressive playmaking stats — numbers that could very well improve with so many talented players returning — his most significant contribution to the team will never show up in the box score: leadership.

It’s the same reason why Beilein never needed to see Albrecht in person to know he could make an impact in the Big Ten, and why Albrecht was named team captain as a junior last season.

Now, at age 23, Albrecht oversees a more experienced but still very young team, and is trying to become a more vocal leader in year four.

“Both Caris and myself have been lead-by-example guys, just go out there and work our butts off and have others follow our lead,” Albrecht said. “Now we’re both working on adding that vocal leadership.

A large part of his leadership comes naturally through his position at point guard, which Beilein’s teams have always run their offense through. But some of it comes from the kind of person Albrecht is.

Beilein thinks that Albrecht has had leadership capabilities since his freshman year, and anticipates this year is the year he truly shows them.

Beilein has trusted Spike Albrecht since Day 1, and now, with the keys to the team’s success, you should too.