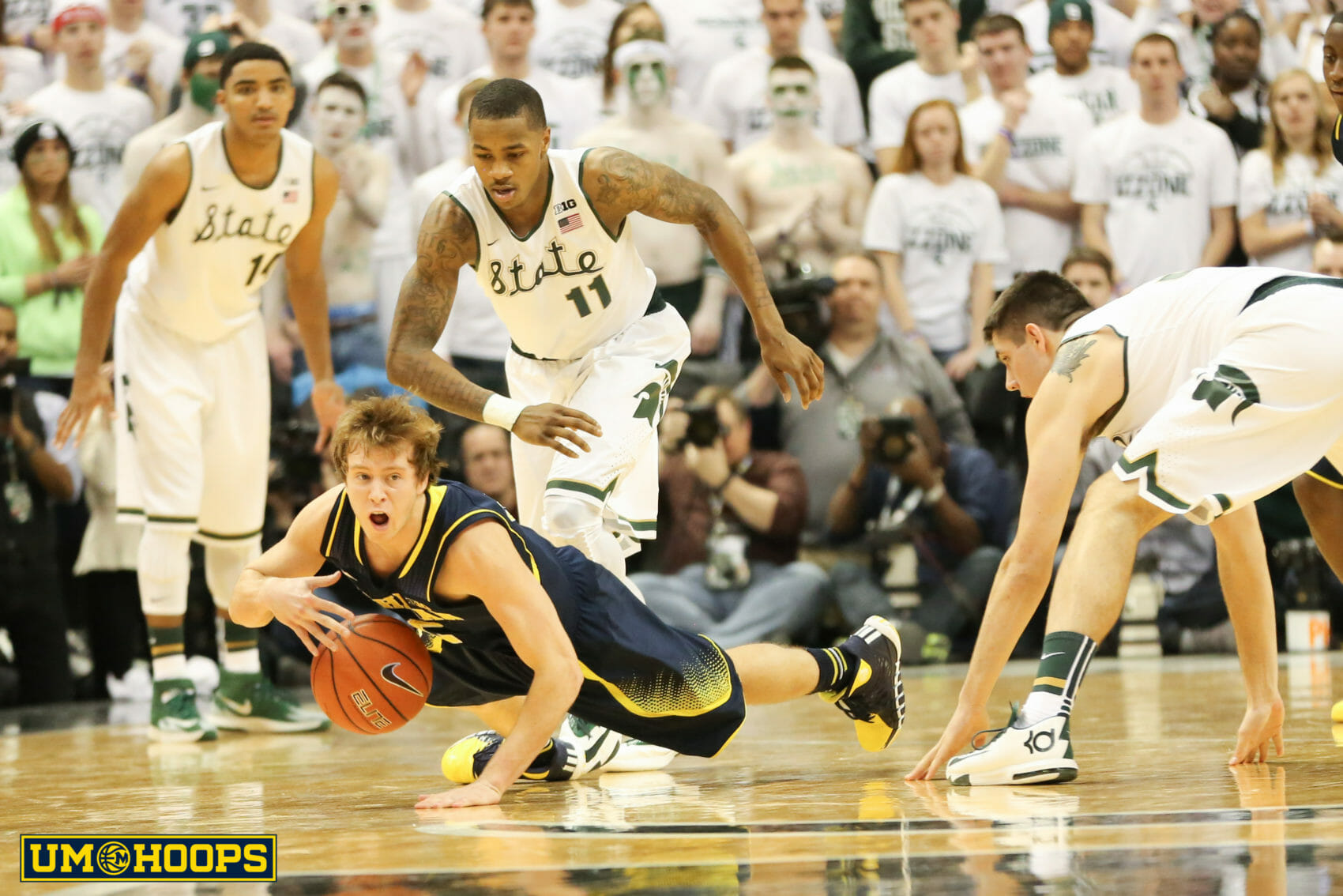 It’s not every day that a player averaging 4.5 points and 2.3 assists per game for his career will cause college students tear up by retiring.

It’s not every day that a player averaging 4.5 points and 2.3 assists per game for his career will cause college students to tear up by retiring.

In fact, it has likely never happened before, and probably never will again. But from the Chem Building to the Union, campus was in mourning Friday morning.

That’s because after an eight-month rehabilitation effort following two hip surgeries, senior point guard Spike Albrecht determined enough was finally enough, and it was time to end his career at Michigan.

Of course, the mourning has nothing to do with the 4.5 points and 2.3 assists. It goes beyond his catchy nickname and flowing hair and even beyond the Wolverines being down another point guard.

Instead, the mourning has everything to do with what Spike, the person, represented. What Spike brought to the team is also the toughest thing to replace — he was the team’s soul.

When I first met Spike, that last paragraph was beyond preposterous. During the 2012-13 regular season, Spike was little more than a bench-warming afterthought on a loaded roster.

Averaging just 1.2 points and 7.1 minutes per game during conference play, Spike looked like the player that chose Michigan over Appalachian State — his only other Division I scholarship offer.

So when I was assigned to work with Spike in a final project that spring, I figured I had lucked out. I would hear stories from one of the best basketball teams in program history, but not have the typical baggage that comes with working with athletes. Our group knew he would pull his own weight, because bench players can’t afford to slack off.

Our first meeting confirmed this. We met in the main lobby of Undergraduate Library, where hundreds of students passed us to study.

Not one of them recognized Spike, but Spike didn’t care — he had a job to do.

And less than a week later in the NCAA Tournament, he had another job to do. By now, everyone knows about Michigan’s run to the championship game, and about Spike’s 17-point performance that kept the Wolverines’ championship hopes alive until the very end. Everyone also knows about his tweet to supermodel Kate Upton, after the game, that was when Spike went from an afterthought to an overnight celebrity.

What most do not know is that the next day, we were back to meeting as a group. We couldn’t meet in the lobby of the UGLi anymore, but Spike insisted he not take a day off, that he still had a job to do.

Spike’s commitment to our project wasn’t forced or forged. Instead, it was a testament to what makes Spike so hard to replace. Spike got to Michigan not from handouts or free passes, but from work ethic alone.

He had no plans to get through Michigan any other way.

Today, Spike’s story is as well-known as anyone’s in college basketball. After not having the test scores to play Ivy League basketball, he spent a year honing his game and grades at Northfield Mount Hermon School.

He couldn’t stop winning and thriving on the court, but also couldn’t stop noticing that lack of offers. Schools were intrigued, but his lack of athleticism and size (Spike is 5-11 and just 171 pounds) made him too much of a risk for a spot on the team.

Even after spending a year at prep school bouncing back from initial rejection, all signs pointed to Spike’s basketball career ending in 2012.

But for reasons Michigan coach John Beilein still has a hard time articulating, the coach was more than intrigued. He showed tapes to his players and assistants at the time and wondered aloud if he was crazy or a genius for looking to add a player no one else in the country wanted to a roster that looked prime for a Final Four run.

After bringing the Albrecht family to Ann Arbor for an open gym and dinner, Beilein made what he would later call one of his toughest decisions. Beilein put his chips on the table and his job on the line with a scholarship offer, but Spike had his chance.

Go back and look at the last three-plus seasons and try to find a time Spike took a play off, set a soft screen or faded into the background of the game. You won’t find one.

He could be going up against lottery picks like D’Angelo Russell or be up 19 over Houston Baptist on zero healthy hips; he would hit the deck, hit the glass and hit the ice bath later to help the team win.

Even if his coaches or parents had to carry him after the game, he was going to do everything he could to make Beilein’s decision in 2012 look less crazy and more genius.

That spirit ultimately made him a two-year captain and face of the team, but with every drawn charge, bewildering pass and cringe-worthy dive after a loose ball, it made him more than the team’s leader, but an inspiring embodiment of what Michigan is — a chance to overcome odds and shine on even the brightest stage.

“I think I showed people you can’t ever let someone tell you what you can or can’t do,” Albrecht said. “My whole life, I’ve been told I wasn’t good enough, I wasn’t big enough, I wasn’t strong enough, fast enough. But I never really let that faze me. I just always tried to go out there and prove people wrong.”

But eventually, “everything he could” wasn’t enough. His lack of size and stamina caught up with him, and he couldn’t merely play through rehab and prove people wrong anymore.

So with a heavy heart and a sore body, he met with his family, coaches and doctors, and made the decision he never wanted to make.

The kid who couldn’t even bail on a group project meeting the day after the National Championship game, who didn’t let a glaring lack of offers deter him from playing the game he loved, walked away from basketball.

“It’s not something we envisioned or saw coming until just recently,” Beilein said. “We’ve got to what’s best for him right now, for his long-term health. I look at is sort of like if someone has a concussion. Yes they can probably play (but) they might be damaged goods for a long time afterwards, we’ve learned that lesson. He’s got some hips right now that need a lot of health.”

Spike will remain with the team, but Friday marked the end of his playing career. Both the team’s and his future remain uncertain, but one thing will always be certain: thanks to Spike, Michigan has a soul, and knows it has a job to do.

It’s not every day a player has an impact on so many people like Spike Albrecht does, and he doesn’t even need to score points to do so.