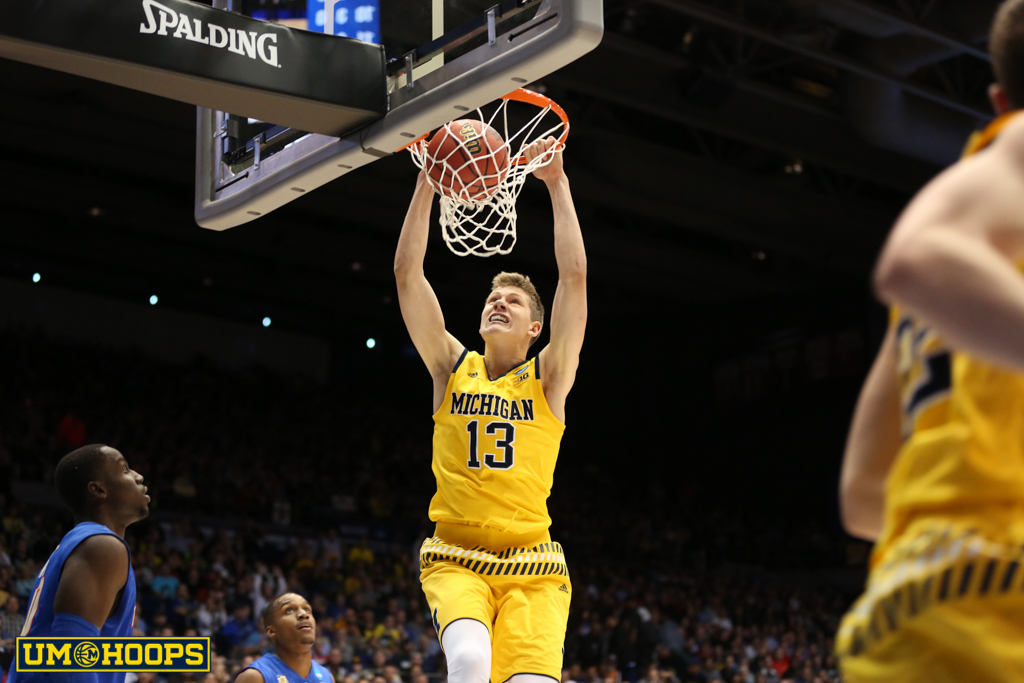 Speaking with reporters for the first time since the Wolverines’ 70-63 loss to Notre Dame in the First Round of the NCAA Tournament, Beilein expressed that, though departures are never ideal, the attrition frees up opportunities for all parties involved.

In just over a week, Michigan coach John Beilein went from having too many scholarship players to one too few.

But according to Beilein, that number could change again soon.

On Wednesday morning, the team announced that sophomore forward Aubrey Dawkins would leave the program to play for his dad, Johnny, who recently took the head coaching position at Central Florida. Dawkins’ departure is the third transfer release Beilein has granted since the offseason began, as sophomore forward Ricky Doyle and graduating senior guard Spike Albrecht are also seeking to transfer.

Speaking with reporters for the first time since the Wolverines’ 70-63 loss to Notre Dame in the NCAA Tournament, Beilein expressed that, though departures are never ideal, the attrition frees up opportunities for all parties involved. He understands Dawkins wanting to play for his father, and that Doyle could use a fresh start on a team with less competition down low.

“The last time we had three transfers, the next year we went to the National Championship game,” Beilein said. “Sometimes it works out well for everyone. It really does. Teams can sort of retool themselves and the young man gets a chance to redshirt and go on and have a really good year.”

While next fall’s team doesn’t return the amount of talent that the 2012-13 unit had, it now has the potential to bring back one player from that squad in Albrecht, who has one year of eligibility left after missing most of his senior season to injury.

Initially, Albrecht didn’t have the opportunity to return, and he and Beilein made plenty of waves when the coach attempted to block Albrecht to transferring to other Big Ten schools. But Beilein removed all transfer restrictions last Friday, and now has a scholarship spot to spare.

Beilein — who noted Wednesday that no teams have contacted him to ask about Albrecht yet — said that his staff is considering all options when it comes to filling that final spot, and Albrecht will be considered.

He also noted however, that Dawkins and Doyle’s roles need to be filled as well, and that might not come from the 5-foot-11 Albrecht, who — though a fan favorite for years — would be the team’s third point guard if he returned.

Beilein said that, beyond Albrecht, any graduate transfers or even incoming recruits will be considered.

“Anything’s possible,” he said. “We are open to any possibilities that come forward now.”

With the Wolverines’ 2015-16 season in the books, the attention turns to next season. Barring an additional recruit, Michigan will bring in four freshman this summer — Xavier Simpson, Ibi Watson, Jon Teske and Austin Davis. Beilein said Wednesday that he’s excited with what all of the recruits bring, and Simpson garnered extra praise.

“He plays the game the right way, he’s an elite passer, and we’re counting on him to come in (to contribute) right away,” Beilein said. “We hope he’s ready to do that.”

Beilein said that Simpson would help relieve Derrick Walton Jr.’s workload at point guard, and has the talent to find his way to the court at the shooting guard position as well.

Hailing from Ohio, Simpson’s drive to compete and take games over reminds Beilein of another guard he got from Ohio five years ago — Trey Burke

“I see the ‘dog’ in him, and I mean that as a positive,” Beilein said when asked if the two share common traits. “We don’t always get that when they come in the door, but I think with him we are with those competitive instincts.”

While the Wolverines’ other three incoming freshmen might not have shown as much ‘dog’ as Simpson, Beilein explained that such a trait is rare. Everyone wants natural winners on their team, but Beilein is also looking for players that, at the very least can become natural winners.

“We try to get to know a kid really before we decide that, but as I said, so few have come in the door with that,” Beilein said. “They come in thinking they know what it takes to win, well they’ve never played in the Big Ten. Just look at the number of freshmen and sophomore that really excel in the Big Ten, that’s not a big number.”

In addition to Michigan’s three transfers, Beilein admitted that there may be more departures coming for the Wolverines — albeit in the coaching staff.

Multiple members of Michigan’s assistant-coaching trio of LaVall Jordan, Jeff Meyer and Bacari Alexander — which has worked for Beilein for a highly unprecedented six seasons — have been contacted by teams about head-coaching positions. And according to Beilein, such attention is well-deserved.

“There’s some interest from other universities, and I’m thrilled about it,” Beilein said. “I think it’s long overdue. They are really ready to be coaches. If they have the opportunity, I think it’s wonderful.”

Alexander appears to be the most likely of the three to leave. Though nothing is set, Alexander is the most logical candidate for the recent vacancy at Detroit. Alexander played for Detroit and worked on the Titans’ staff from 2001-07.

If he does lose an assistant or two, Beilein said he will be happy for them, and will also embrace the opportunity to get a fresh perspective on the coaching staff in the departing assistant’s place.

“I do not want that to happen, but I understand it,” Beilein said. “It’s almost like putting your roster together — who best fits what we need to fill this team? To recruit, positional development, what do we need?

“The game is changing, what do we need to do to get better?”