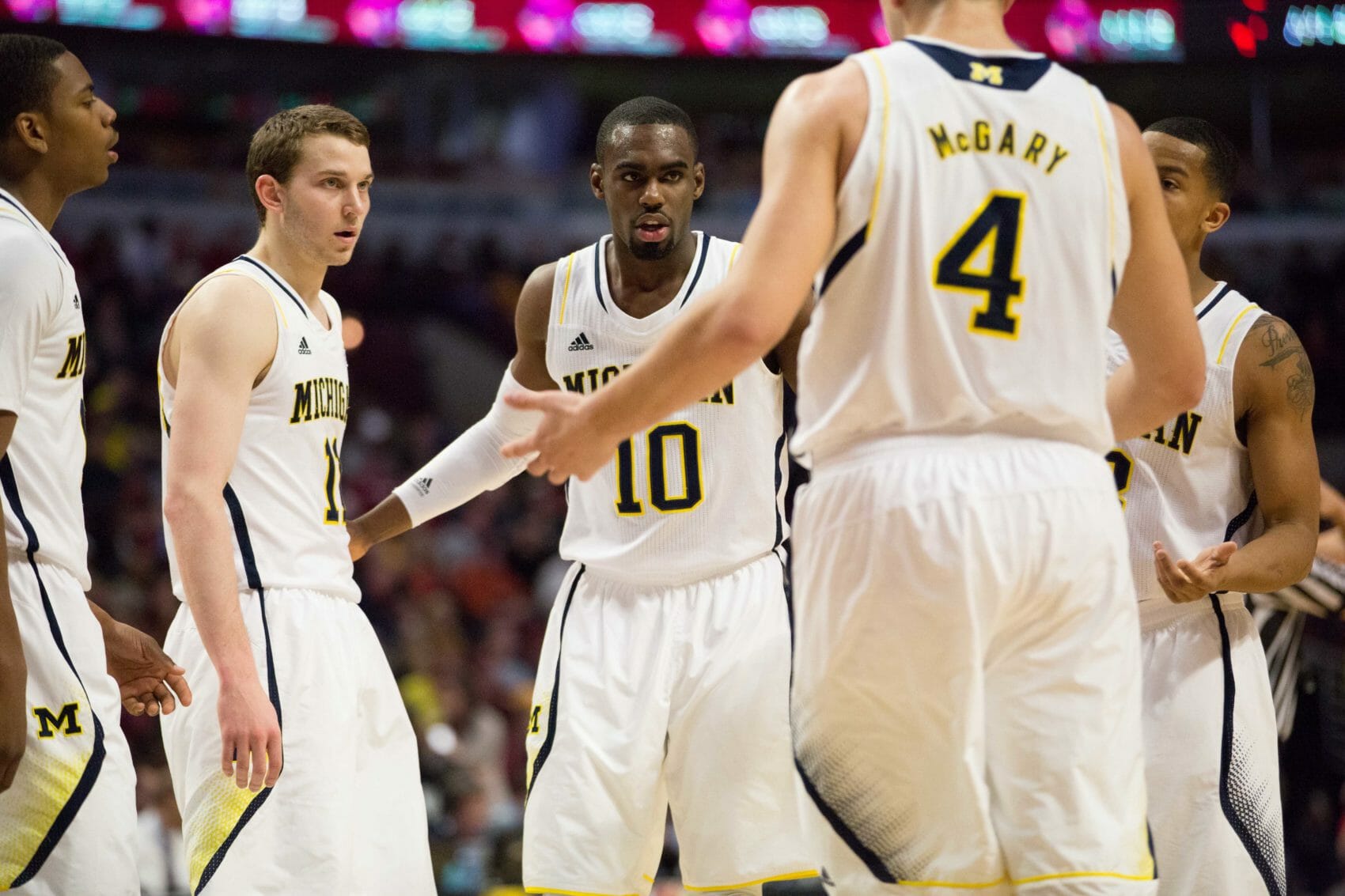 It was a busy day for former Michigan Wolverines as final cuts went out across the NBA on Monday. There was good news for Nik Stauskas and Glenn Robinson III, who made the Sixers and Pacers respectively, while Mitch McGary now finds himself looking for work.

It was a busy day for former Michigan Wolverines as final cuts went out across the NBA on Monday. There was good news for Nik Stauskas and Glenn Robinson III, who made the Sixers and Pacers respectively, while Mitch McGary now finds himself looking for work.

McGary was waived by the Oklahoma City Thunder, two years after being selected 21st overall in the NBA Draft. He played in 52 games, averaging 4.4 points and 3.5 rebounds for the thunder. He battled injuries over his two years in Oklahoma City and was also facing a pair of suspensions for violating the league’s drug policy, and then violating the terms of his suspension.

He also missed all six preseason games with foot soreness.

“I think the hard part was with his foot, with the suspension knowing that he’s not gonna be available for the first 15 games,” Thunder coach Billy Donovan told the Oklahoman on Friday. “… trying to get some of those other guys in the frontcourt an opportunity to absorb more minutes.”

McGary is expected to look to Europe or China for his next step.

For now, Mitch McGary is hoping to resume career in China or Europe, sources tell @TheVertical. Wherever he plays, he has issues to resolve.

Nik Stauskas made the roster in Philadelphia, but it wasn’t a guarantee.

Glenn Robinson III signed a three-year deal with the Pacers last year and played well in the preseason. He averaged 12 points, 7 assists and four rebounds per game in preseason play, shooting 60% from the floor and 67% from three-point range.

Robinson is focused on trying to make the rotation this year.

“I spent two years on the bench,” Robinson told the Star. “I’m not trying to go back there. Trying to make that rotation and just stay confident.”

Former Michigan All-American Trey Burke made headlines with a series of comments at a Knight Commission panel discussing the current state of college basketball.

CBS Sports’ Jon Solomon tweeted a number of statements that Burke made that stirred the pot. Burke compared breakfast food on campus to jail food and lamented his lack of preparation for the financials of the NBA (after being asked). The former All-American point guard also noted that people knew he ‘checked out’ when he returned to Michigan — it’s unclear if this means academically, the fact that he almost left Michigan before returning, or on the court (where he earned National Player of the Year).

The comments about jail food and not being prepared for the NBA made waves when they were tweeted out, but it turns out that the full version is a little more rational. MLive’s Brendan Quinn dug up the full transcript of what was said and published it late Monday evening.

Burke’s full answer to the question on being prepared for the NBA:

“I think when I first came in (to college), I came in strictly with the student mentality. I knew I someday wanted to be a professional basketball player. But coming in I wasn’t a McDonald’s All-American. I wasn’t a — ‘Oh, he’s going to be a No. 1 draft pick’ — or — ‘He’s going to leave early.’

“It was just that one day, out of all of those days I know I wasn’t listening, and in my heart, I knew it was the right decision to come back. So when I came back my sophomore year, like, everyone at the university kind of knew I was checked out — what I would call it. And as an athlete, when you’re kind of checked out, you already have in your mind that your an NBA player, but you’re in college. You know, some guys just don’t go to class. Other go to class. I still went to class and, on top of that, they checked my classes, so I knew I had to go to class.

“Long story short, I felt like, personally, they could have helped me structure what I was going into — as far as finances, as far as budgeting, as far as investing. I didn’t know anything about any of those things. All I knew was basketball. And I felt like, at that point, me being a sophomore at that point in my career as a student-athlete, I think they kind of knew that I was going to declare, especially when we went deep into the tournament. I still hadn’t told the media or still hadn’t told anyone, but I was making it known that I want to enter the draft, and I don’t feel like I was equipped enough going into the process, and I feel like they could have helped me more with me building a team for what I wanted, rather than an agent coming in and telling me all this knowledge and things.”

For the most part, those are fair points about the NCAA process. Like any other college student, and there are plenty of other college students who leave college without basic financial knowledge, a student-athlete’s curriculum isn’t based upon personal finance. And that while everyone knew Burke was going pro, it isn’t a situation where you can just stop going to your college classes and go to agent prep.

The other side of the situation is that Burke hired his father and uncle to represent him when he declared for the draft. He also hired Jordan Dumars and another recent graduate to manage his money. Those sound like decisions that he might regret now, but they are also probably not decisions that the 19 year old version of himself would have taken advice on at the time.

Tim Hardaway Jr. struggled with his shooting stroke throughout the preseason.

In 6 preseason games with the Hawks, Hardaway averaged 9 points, 2 assists and two rebounds while shooting 30% form the field. He made just 18% of his three-point attempts, but had back-to-back double-digit games against New Orleans and Orlando to close the preseason out on a stronger note.

Caris LeVert didn’t play in the Nets preseason as he continues to rehab from his foot surgery, but he’s on the opening roster for the Nets. It’s unclear when he’ll return to game action.