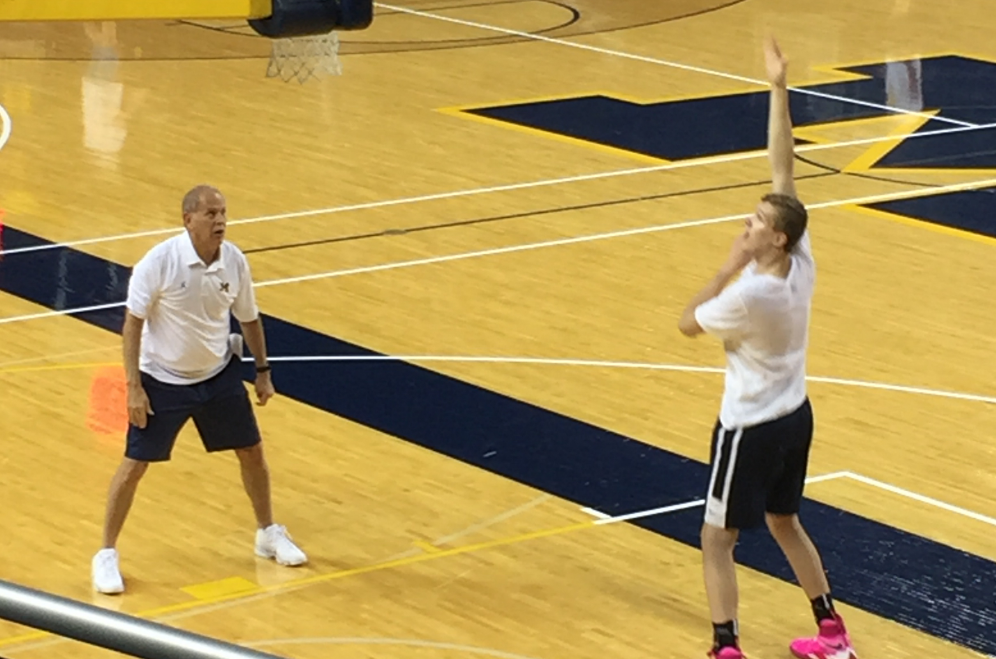 The roster wasn’t as star-studded as some previous years, but Michigan’s second College Practice Camp of the summer drew several notable prospects to Ann Arbor on Saturday afternoon.

The roster wasn’t as star-studded as some previous years, but Michigan’s second College Practice Camp of the summer drew several notable prospects to Ann Arbor on Saturday afternoon.

Chief among those was Taylor Currie, the once-2019 commit who reclassified to 2018 earlier this summer. Currie, a rangy 6-foot-9 forward who will most certainly spend much of his first year at Michigan in the weight room, received plenty of attention from Michigan’s coaches throughout the day.

In drill work, Saddi Washington spent time with him, before John Beilein pulled him over to the side for one-on-one work several times. Beilein also introduced Currie to Quinn Slazinski, a class of 2019 prospect who took an unofficial visit to Michigan this week, while the campers were stretching.

Currie, as mentioned, is lanky. He’s got long arms, a decent wingspan and some bounce to him. The biggest area of improvement will be strength — dealing with the rigors of Big Ten play as a ‘5,’ after all, is much different than anything he’ll see at this level, not to mention Currie will be younger than his peers thanks to his reclassification.

But the skills are there. He was solid in ball-handling drills, displayed nice touch around the basket and played well in scrimmages.

Besides Currie, Caleb Hodgson, a 2019 forward from Dansville rated as a three-star by Rivals, and Jacob Polakovich, a 6-foot-8 forward from Grand Rapids Catholic Central, were some other notable big men in attendance.

Onlookers who were hoping to see Currie and Slazinski face off were not disappointed. The two played against each other in the first scrimmage of the camp, and while Slazinski — who took an unofficial visit to Michigan this week — is most commonly thought of as a wing, he drew Currie on defense. Both went at each other and had success at times. Currie opened things up by hitting a midrange jumper over Slazinski, before Slazinski came back later to block him down in the post.

Currie took advantage of the matchup a few times, winning position down low and scoring on Slazinski, but Slazinski made himself known, as well. He beat Currie with a spin move twice, and while he couldn’t finish the first time, he did so on the latter attempt and let Currie know about it.

At this point in time, Slazinski looks like he’d be a decent fit in Michigan’s scheme. He’s skilled, has a nice-looking shot — he hit a couple threes in afternoon play — and looks for his teammates as much as he does his own shot when he attacks.

Newly-hired assistant coaches Luke Yaklich and DeAndre Haynes were both in attendance Saturday. While speaking to the campers at the beginning of the camp, Beilein mentioned that today was the second day on the job for both of his new hires — initially, he had planned on running the camp without them due to the lengthiness of the hiring process, but things were ironed out in time for them to join.

Both Yaklich and Haynes appeared to take more of a hands-off approach — almost certainly a product of the camp having been planned without them. While players such as Duncan Robinson and Austin Davis were leading players through drills, Saddi Washington took a lead role in addressing the campers and newly promoted Chris Hunter oversaw much of the event.

While Yaklich and Haynes spent more time observing and evaluating, it was too early to draw any conclusions about their coaching styles from a one-day camp on their second day on the job.