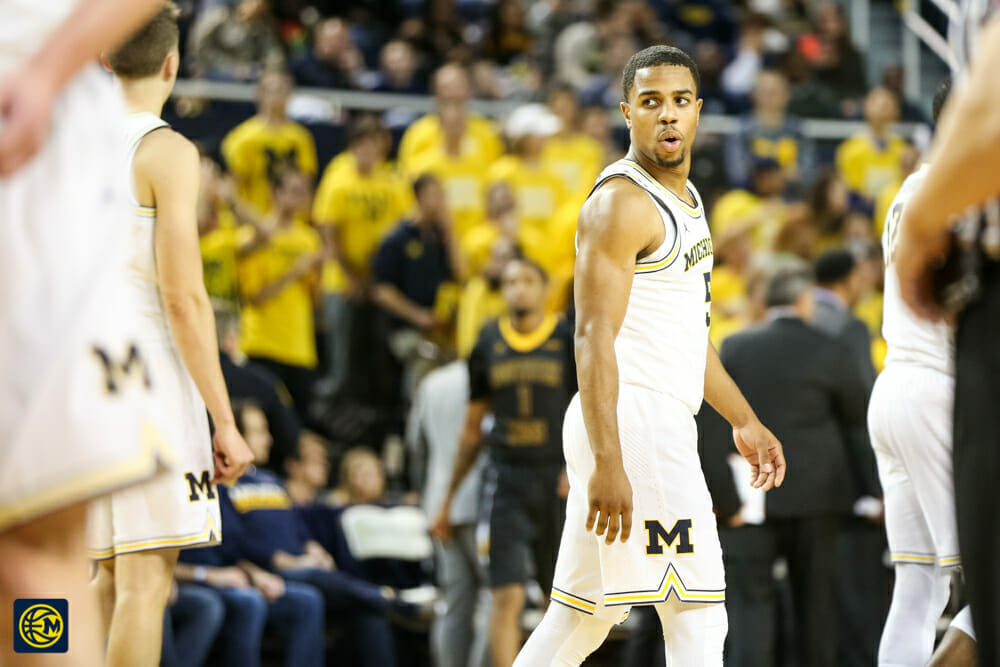 Jon Teske and Jaaron Simmons provided key minutes off the bench to help Michigan to its third win in six days.

In a script that felt eerily familiar, Michigan used a decisive run midway through the second half to wiggle out of a small deficit in a guarantee game.

The Wolverines were trailing 40-38 when Jon Teske, Jaaron Simmons and Charles Matthews checked into the game with 13:01 to play. From there, Michigan went on a 21-3 run to seize control of the game.

Teske recorded the first double-double of his career, finishing with 10 points and 11 rebounds in 15 minutes off the bench. The 7-foot-1 big man from Northeast Ohio had only scored 11 points and grabbed 15 rebounds total in his previous 78 minutes of career action.

Jaaron Simmons had three assists during the Wolverine run, finishing with a team high five, while Duncan Robinson knocked in two critical threes before Charles Matthews finally got rolling to put the game away. 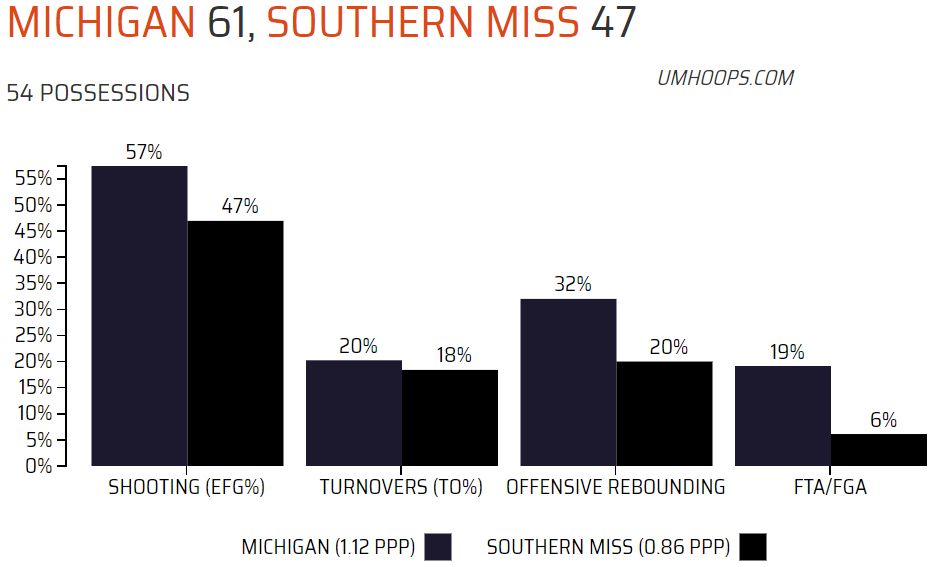 Michigan’s second half defense (and Southern Miss’ shooting regressing toward the mean) turned this game around. The Golden Eagles scored 33 points on 27 first half possessions (1.22 PPP) while making half of their threes. In the second half, they managed just 14 points in 27 possessions (.58 points per possession) with a dreadful 28% effective field goal percentage.

The truth is always somewhere in the middle. Southern Miss hit some circus shots in the first half and probably missed some open ones in the second. This was a poor offensive team, but Michigan forced more second half turnovers (7) than made shots (6) and that’s important considering the game was in the balance.

Southern Miss does deserve credit for forcing the game to be played almost entirely in the halfcourt. Michigan’s transition offense bailed it out at times in the first two games, but this was a 54 possessions slog that featured a combined 2 fast break points. The Wolverines hadn’t played a game that slow since 2015 when they were trying to grind out upsets after Caris LeVert’s injury.

Offensively, Michigan just doesn’t really seem to have a lot of direction. After the game, Beilein called the offense “stagnant” and lamented the ball sticking and Michigan should be expected to score more than 1.12 points per possession against Southern Miss. Michigan made just four of its first 18 threes before hitting 4 of its last 5 late and there were stretches where it just couldn’t buy a basket.

In the end, Michigan finished shooting 63 percent on twos and 35% on threes for a 57 eFG%. Overall, it was the sort of game where Michigan played effectively for 6 or 7 minutes in the first half and 10 minutes in the second, but nothing seemed to work in the other 20-plus.

The Wolverine offense looked at its best when it was playing out of the post — something I’ve rarely written during the 10 years I’ve managed this site. Matthews, Wagner and Teske all caught the ball with their back to the basket and were able to ISO and score, turn and shoot, or find an open man. Simmons also seems more determined to pass the ball (and encourage his teammates to pass the ball) into the post than any Beilein guard before him.

Great teams roll through these non-conference guarantee games routinely. Other teams take some time to figure things out and it is no great surprise that Michigan is taking a few early lumps this season. A 12-point win over Southern Miss might be a ‘KenPom loss’ but it counts in the win column and never matters again.

Now the Wolverines are set to start on their whirlwind tour that will take them to Maui, Chapel Hill, Austin, Columbus and Detroit. They’ll be tested under brighter lights and in front of bigger crowds. What the result will be is still anyone’s guess, but three games in three days in Maui will shape the next two months. 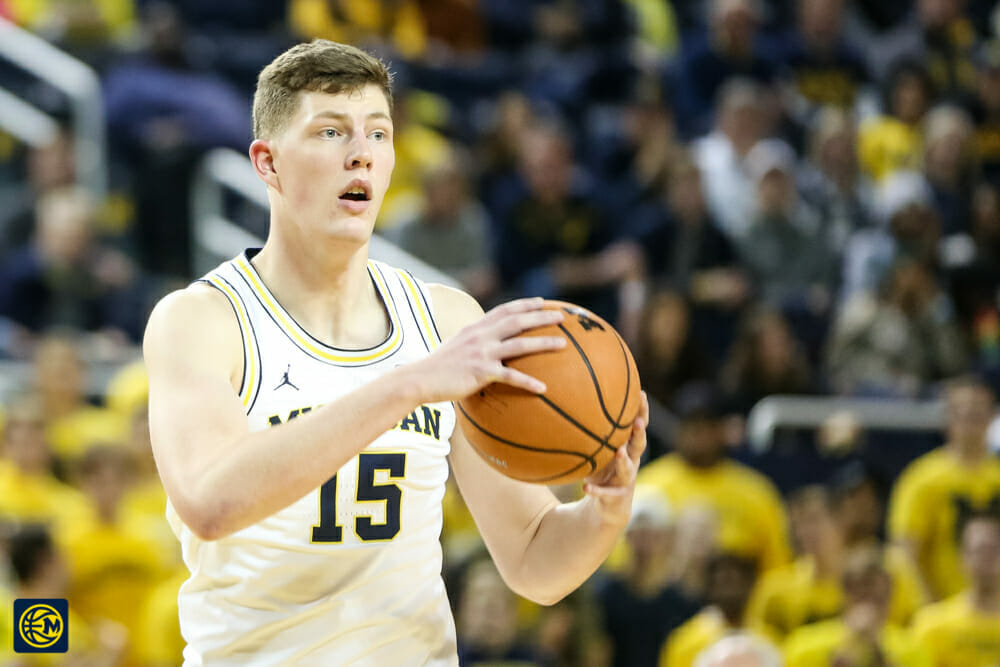 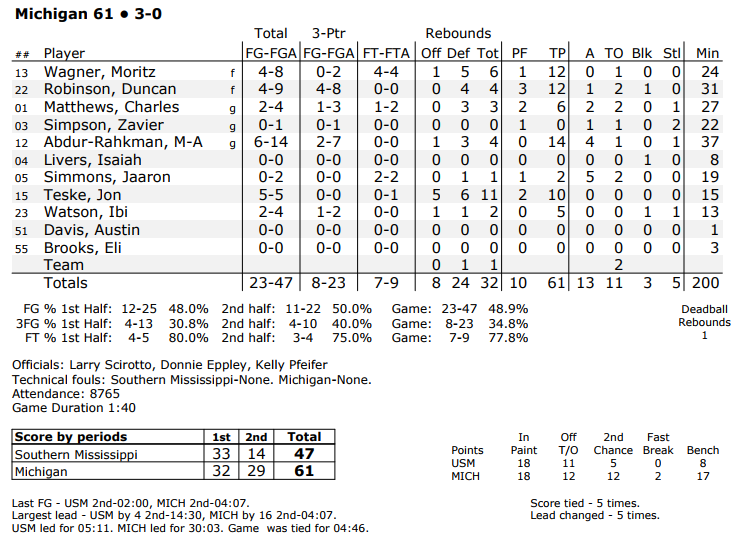