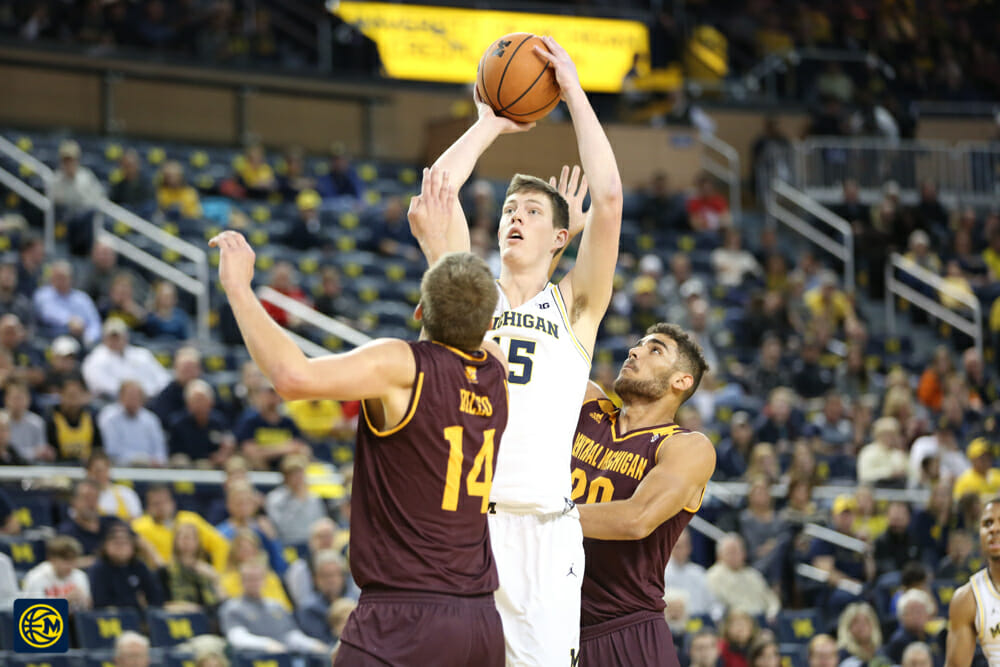 “Guys are always telling me, ‘Do this, do that.’ And I know that I’m capable of doing that, and going out there and trying to help the team win.”

John Beilein made one thing clear after his team’s 72-65 win over Central Michigan this past Monday. Michigan’s head coach thought it was the best game Jon Teske has ever played.

Teske, a sophomore center from Medina, OH, hasn’t played much in his career thus far. He appeared in 20 games last year as a rail-thin freshman who looked out of place on both ends.

Without context, those stats don’t seem like much. But it was yet another incremental step forward for Teske — simply part of the process he’s undergone since arriving at Michigan.

“(Teske’s) got to know that he’s got another level of play,” Beilein said Wednesday afternoon. “… Now they’ve got to understand, ‘Wait a minute, I’ve been here for a year. I have more in me.’ So we really challenged them in that game, and we’re going to challenge them every day.

Teske said that sitting on the bench so frequently last year allowed him to gather information, learning more about the game. He knew entering this year that there were minutes available behind Moritz Wagner — and it seems that opportunity spurred Teske’s new mentality.

Teske’s passivity has been hashed over before. Beilein spoke about it before the season, painting a picture of a reluctant shooter — one that had to be encouraged to let it fly.

The sophomore center certainly had the green light against Central Michigan’s zone. He took two turnaround jumpers from the elbow, was fouled on both and turned them into four points.

Floor-stretcher: that’s only one of the roles that Teske sees himself fitting.

Teske doesn’t model himself after any single player. He said Wednesday that he tries to be himself — a 7-footer who can shoot the three, hit from the elbows, toss in hook shots, rebound, hedge ball screens and, perhaps most importantly for this Michigan team, block shots.

Beilein was quick to mention Wednesday that Teske hasn’t secured the backup center job just quite yet. Apparently, that spot is still bouncing back and forth between him and Austin Davis.

There aren’t any hard feelings between the two classmates, though. Teske is content with where he’s at right now — and, of course, wants more.

“Competing with Austin, making him better, he’s making me better, we’re making Moe better, so it’s kind of like a three-headed monster,” Teske said. “We’re all competing for minutes, and it’s really helping the team out.

“… Guys are always telling me, ‘Do this, do that.’ And I know that I’m capable of doing that, and going out there and trying to help the team win.”