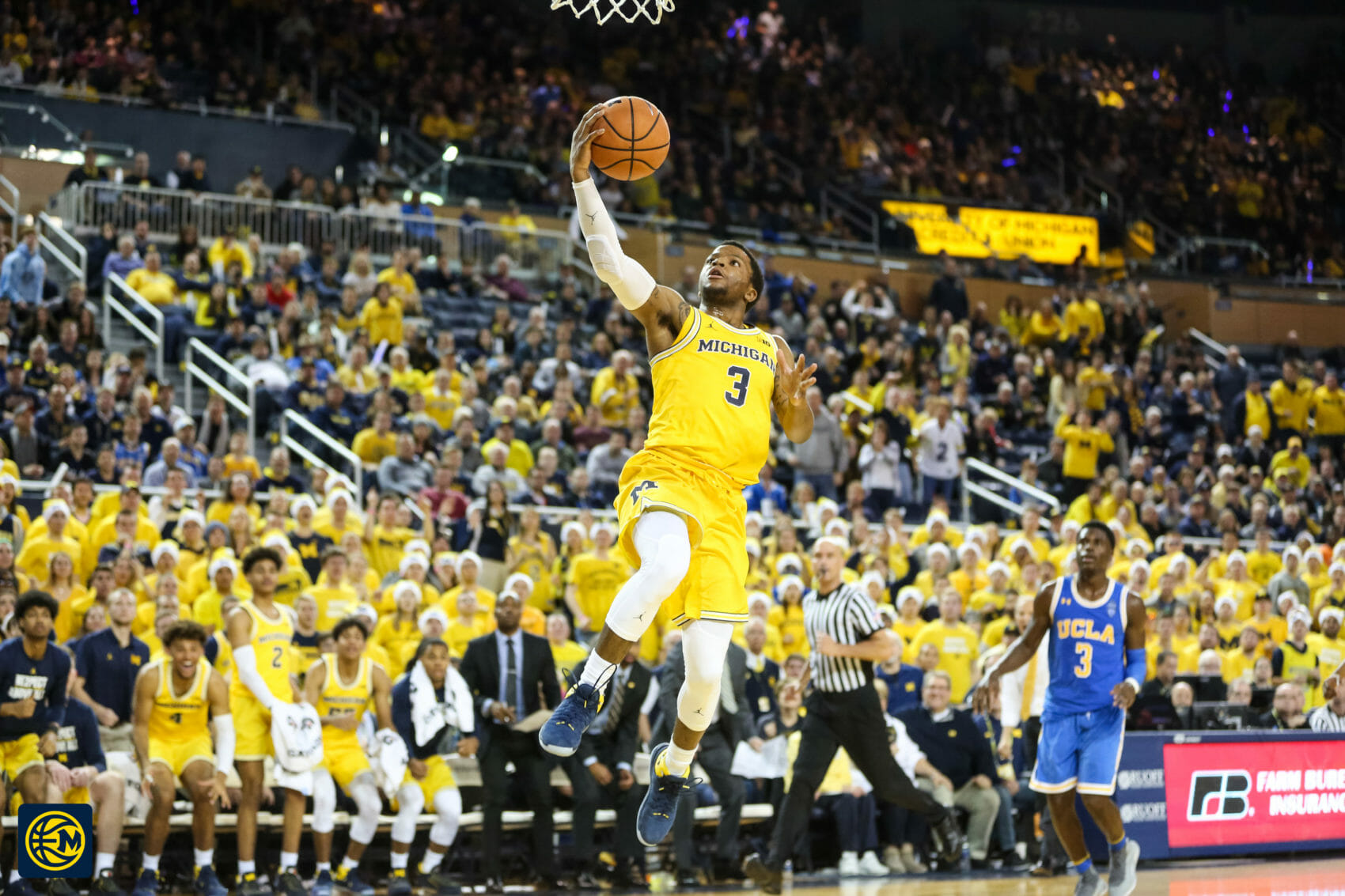 Michigan notched its best win of the season on Saturday, coming back from 15 points down to beat UCLA 78-69 in overtime. Here are five takeaways.

With the exception of a six-second stretch in the last minute when John Beilein put Eli Brooks at point guard for offensive purposes, the reins belonged to Simpson at the game’s end. The sophomore played 12 second-half minutes and the entire overtime period.

When Beilein brought Simpson in, the reason was obvious: stop Aaron Holiday. The Bruins’ standout point guard scored five early second-half points after dropping nine in the first and Brooks wasn’t going to be the solution.

Simpson did as good a job as anyone could have asked, notching four steals. The last of them may have been the game’s most important play, as the sophomore knocked the ball away, picked it up, then went down on the other end for a layup to cut UCLA’s lead to one with 18 seconds left.

“Holiday’s so quick he got everybody at the beginning,” Beilein said. “And then as the game went on, (Simpson) got to really feeling better, he did a great job and his steals were huge.”

Most surprising, however, but his output on the other end.

He shot 6-for-9 from the field for a career-high 15 points, including a reeling, off-balance layup which Simpson banked in from the most awkward angle possible.

“I call that the 3 o’clock,” Simpson said of the former. “…I didn’t think it was gonna hit glass, but I knew it was going in once I released and it felt good.”

If Simpson can play like that on the offensive end, he’ll be the point guard. The offense has lagged all year with him running it, but on Saturday, it was more fluid with him than Brooks.

Charles Matthews can carry Michigan, but needs to improve

We saw Charles Matthews at his absolute best and his absolute worst on Saturday, ironically enough, within minutes of each other.

As Michigan was mounting its comeback, Matthews couldn’t be stopped. He got whatever shot he wanted, scoring out of ball screens and with mid-range jumpers off the dribble. He took 3s he’s been hesitant to take in the past, nailing 2-of-3 from beyond the arc, and passed the ball well, finding a cutting Zavier Simpson from the post to seal the game with just over a minute to go in overtime.

He also turned the ball over four times and went 2-of-10 from the free throw line, which seemed like it would be enough to kill Michigan’s comeback chances.

“I was very honest with him,” Beilein said. “I said, ‘We got five or six minutes to go, you’ve been the MVP for UCLA so far. You need to be the MVP for us right now.’

“He started the second half: walked, turned the ball over, missing foul shots…As he learns how good a player he’s going to be, he’s got to go through these pains. He’s got elite, really high ceiling and now he’s gotta know how to apply it.”

Matthews is now shooting 43.6 percent from the free-throw line, an unacceptable mark for anyone, especially the player who leads the team in free throw attempts.

Matthews’ ability to get to the line should be a plus — he’s leading the team in free throw rate, or at least those who qualify for KenPom’s leaderboard. But if he can’t knock down shots from the line, especially in clutch situations, that almost becomes a burden.

“In practice (Matthews’ free throw shooting) has been really good,” Beilein noted. ‘He’s just gotta get used to being in those situations.”

The Wolverines have managed to find contributions from someone besides Wagner in most games. However, that someone has changed on a game-by-game basis.

On Saturday, it was Charles Matthews. In the win over Indiana, it was Jordan Poole. Everyone from Muhammad-Ali Abdur-Rahkman to Duncan Robinson to Jon Teske has had their turn. That’s not a bad thing either — if Michigan has enough depth that any player could go off on any night, that’s awesome. But Wagner has been the only one to do it on a regular basis.

Saturday was no different. Matthews and Simpson stepped up, but Wagner led the team in scoring with 23 points on 10-of-16 shooting from the field. He struggled on the boards, but he did everything on offense.

With Michigan midway through its comeback, Wagner even pitched in a steal that led to his own transition dunk. On the next two possessions, Wagner nailed two 3-pointers off pick-and-pop looks to cut UCLA’s lead to two.

“Moe’s 3-pointers there, they changed everything,” Beilein said.

That was just before Beilein noted that Wagner hadn’t been playing “particularly well.” Even on a day which prompted that sort of description, however, Wagner managed to lead the team in scoring.

Wagner struggled to defend UCLA’s 7-foot center Thomas Welsh on Saturday. Welsh was UCLA’s most efficient player, scoring 22 points on 8-of-12 shooting from the field.

“He’s a sort of high-level player,” Bruins coach Steve Alford said of Welsh. “He rebounds the ball, he’s averaging a double-double for us. He shoots it from the 3, he makes free throws, he’s a beast in the post. I think he’s just a terrific player.”

That may be an accurate assessment of Welsh, but this isn’t the first time Wagner has struggled to contain big men down low this season. Indiana’s Juwan Morgan notched 24 points on 9-of-14 shooting going largely against Wagner last week. Ohio State and North Carolina’s big men also had big nights against the Wolverines and a Texas team that features a playmaking 6-foot-9 four-man in Dylan Osetkowski and five-star freshman big man in Mo Bamba lies ahead.

Jon Teske can pick up some of the slack on defense, but Michigan needs Wagner on the other end. Wagner himself acknowledged it after the Indiana game: the Wolverines can’t afford for him to get killed down low.

Duncan Robinson hasn’t snapped out of his slump yet

“Just keep shooting,” Beilein said when asked what he’s telling the senior. “…I think he’s been through some tough times right now as far as shooting. He’s been through this before, he’ll get out of it. But he’s really in a tough spot right now, gotta stay positive.”

Given Robinson’s history — he’s a career 42.1 percent shooter from deep — we can say with some certainty that this is only a slump. However, the cold streak hit its fourth game on Saturday and at some point, he has to turn it around.

Michigan’s three-game stretch after it returns from Austin will provide him the chance to do that, if  he doesn’t get hot against the Longhorns.