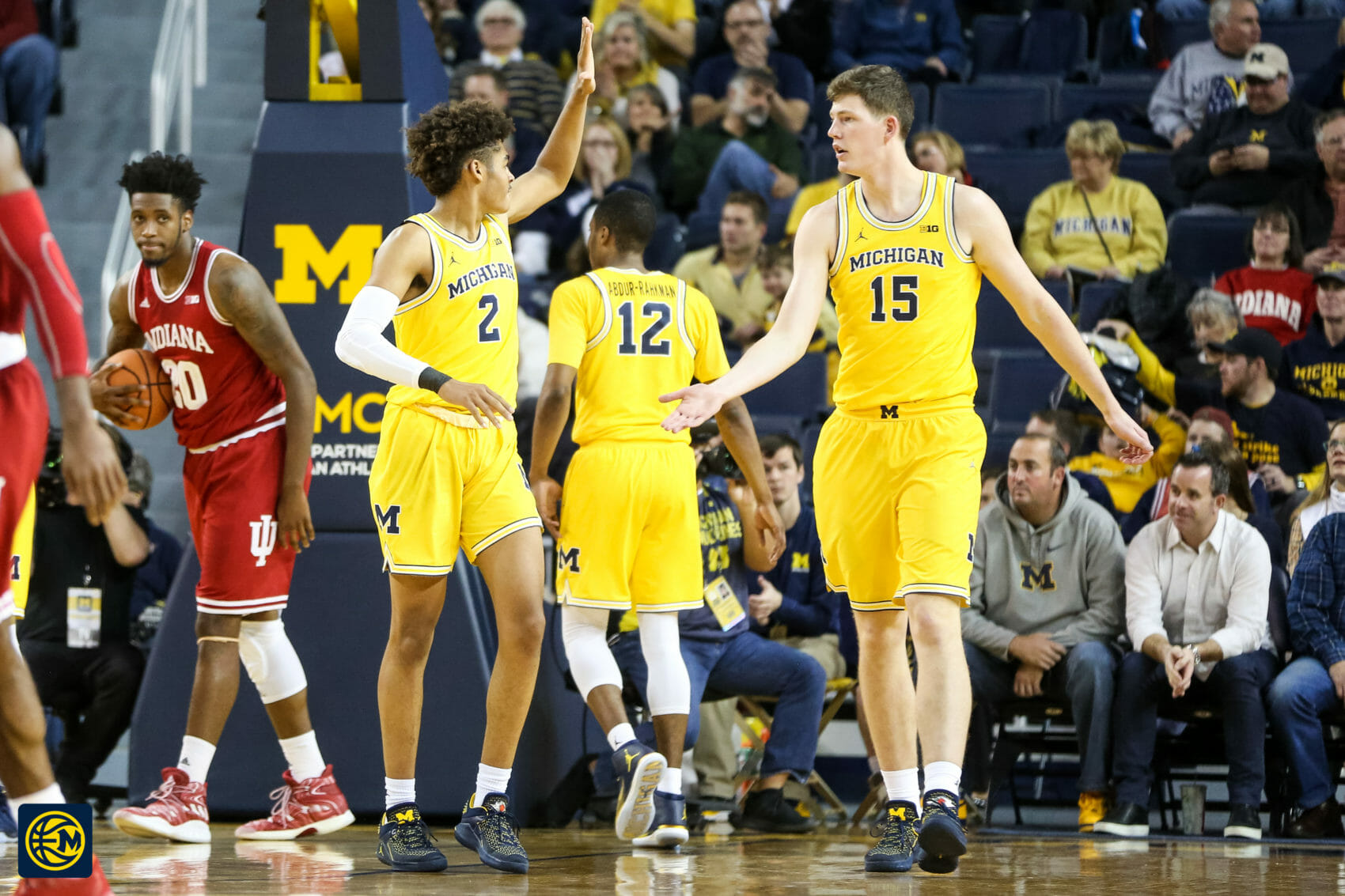 Michigan opened Big Ten play early on Saturday, and did so with a bang. The Wolverines beat Indiana 69-55, jumping out to an 18-4 lead in the game’s first four minutes and never looking back. Here are five takeaways.

Beilein gave Charles Matthews a quick hook, pulling the junior just 15 seconds into the game after a foul. Jordan Poole took the opportunity and ran with it.

After missing his first attempt, Poole nailed a 3 from the corner off the catch. He hit another in transition a minute later and that was only the beginning. The freshman was 5-of-10 from beyond the arc and 7-of-12 from the field, leading the Wolverines with 19 points.

“I hit a couple, then I came down on the side of (Indiana’s) bench and they were talking about (how) I’m a shooter,” Poole said. “So I feel like I kind of sneaked up on them a little bit.”

His performance reached its crescendo in the second half. The Hoosiers had cut the deficit to 11 and Michigan was on its way to a junk possession. Poole had the ball a few feet behind the three-point line as the shot clock wound down. He decided to pull up. Swish.

“He just needed to be good before he’s trying to be great,” said John Beilein. “Great players just take good shots. They make good plays. They are solid on defense.”

“…And now, he’s taking care of the ball and he’s taking good shots. Alright, it’s your turn..I love these three freshmen, I love ‘em. They still make me angry every day, but I love ‘em.”

Nobody is going to claim that Poole’s performance on Saturday is sustainable. But suffice it to say the freshman has carved out a permanent spot in the rotation and could even be one of the Wolverines’ better scorers.

The rotation is taking shape

Beilein didn’t care much for questions about the rotation after the game, asking if Simmons is “really part of the story.”

“You could go into the next game and Jaaron may play big minutes again,” he added. “We do feel it’s hard to play three in one game.”

That may be, but it’s clear right now that Beilein has more confidence in Brooks and Simpson. All you have to do to figure that out is look at the minutes distribution. There isn’t much doubt that Simmons’ ceiling is the highest — he had a 34.5 assist rate last year at Ohio and scored 19 points per 40 minutes. But something isn’t clicking right now.

Given that Brooks and Simpson are playing just fine right now, it’s hard to imagine Beilein will hand the reins to Simmons until he’s fixed whatever struggles he’s having right now.

On the wing, Jordan Poole appears to have passed Ibi Watson and a lineup with Abdur-Rahkman, Poole and Matthews saw some time as a 2-3-4 combination with Duncan Robinson battling foul trouble. That could be something to keep an eye on moving forward.

Moe Wagner is growing as a passer, not so much as a defender

Wagner had the play of the game when he found Isaiah Livers cutting behind him from the post for a layup. He could not have made that pass a year ago — a lot of NBA players couldn’t make that pass if you asked them.

The junior finished with three assists, which won’t cause any eyes to pop, but Wagner moved the ball in a way we haven’t seen from him. He found cutters from the post, looked for open guys out of isolations, and generally kept the ball moving constantly.

Wagner had a pedestrian (for him) 13 points and seven boards, but his passing was a whole new element. It made Michigan’s offense hum and if it’s at all sustainable, the Wolverines will be one of the best-scoring teams in the country again.

On defense, however, it was a different story for Wagner. Indiana sent Juwan Morgan at him in the post all day and it worked. Morgan scored 24 points — the only Hoosier to reach double-digits — on 9-of-14 shooting from the field. He also got to the line nine times, making six from the charity stripe.

I couldn’t say it much better myself. The Wolverines already have a major defensive liability in Duncan Robinson. They can’t afford another, especially when switching nearly every screen.

Chemistry is developing at a good rate

Michigan has just a 43.4 percent minute continuity rate, per KenPom, 224th in Division I. The underrated part of losing Derrick Walton, Zak Irvin, and D.J. Wilson was that it created a need to build chemistry with a largely new group.

That was fairly evident a few weeks ago, when the Wolverines were struggling with the like of North Florida and Central Michigan. But Saturday might have been a breakthrough.

Michigan passed the ball in a way it simply hadn’t all year. Wagner was the obvious example, but everyone seemed to be on exactly the same wavelength.

The irony is that the Wolverines finished with 16 assists, far from a season-high. But everything clicked and Beilein’s system did its job, creating space and opening up shooting opportunities at every turn.

This was evident from the beginning. Michigan’s first two baskets came from drive-and-kick 3s where the Wolverines simply passed the ball to where the help defense came from. The third was a climax to that tune, a Duncan Robinson drive-and-kick to Muhammad-Ali Abdur-Rahkman. When the help recovered in time, Rahkman simply swung the ball to Poole in the corner for an open 3.

“It’s a fun way to play once you realize the freedom that’s within it,” Beilein said. “But we just got a team. You just can’t create your own freedom, it’s sort of created for you. You’re just waiting for these pockets to open up and things to happen. And it’s a fun way to play”

Eli Brooks can play in the pick-and-roll

There were certainly doubts about whether Eli Brooks could produce as a ball-handler — even when he took over the starting point guard job, Abdur-Rahkman or Matthews tended to handle the ball a lot of the time.

This game won’t put those concerns to rest, nor should it, but Brooks displayed aptitude in the pick-and-roll. He found Rahkman curling up for 3 off after coming off a Jon Teske screen early in the game. A few minutes later, he threaded a pass through traffic nicely to find Teske off a pick-and-roll, but the big man dropped it. Later in the game, Indiana tried hedging a Brooks-Teske pick-and-roll. The freshman went horizontal, taking both Hoosiers with him, before hitting Teske for an easy layup.

Brooks finished with six assists, a season-high, though he didn’t make a scoring impact.

“We’ve just seen this ability to think through the next play,” Beilein said. “Now all of his fundamentals aren’t there, but his mind is there. He just is learning how to do it.”

We have yet to see Brooks excel as a shooter, the role he was tapped to play before the season started. However, the freshman’s stroke will likely settle in time. For now, it’s encouraging for Michigan that he looks comfortable running the offense. On Saturday, he did.