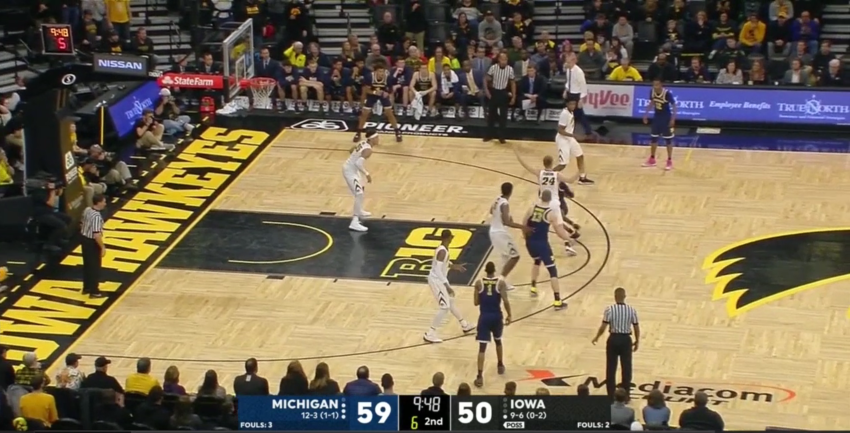 Michigan won at Iowa for the first time since 2011 on Tuesday night, here are Five Key Plays from the victory.

Michigan won at Iowa for the first time since 2011 on Tuesday night, here are Five Key Plays from the victory.

For the second game in a row, Michigan struggled out of the gates. The Wolverines turned the ball over five times in their first eight possessions and were stuck in an ugly close game. John Beilein went to his bench with Michigan trailing 9-10 and brought Isaiah Livers and Zavier Simpson into the game.

The duo would go on to combine for 28 points on 15 shots and 10 assists in the victory and didn’t wait long to make their impact. Livers immediately tipped a missed Charles Matthews free throw out for a second chance. On the ensuing offensive possession, the ball found Livers on the wing with the shot clock dwindling and he was forced to make a play. He managed to drive middle and find Jon Teske for an open baseline jumper. The sophomore big man hadn’t made a shot outside the paint this season, but he knocked in two mid-range jumpers with relative ease at Iowa.

That play seemed to jump start Livers and he followed it up with an alley-oop dunk in transition and a beautiful pass from the middle of the 2-3 zone to Muhammad-Ali Abdur-Rahkman for an open corner three. Abdur-Rahkman added a second deep triple against the zone before recording a steal and a look ahead assist to Zavier Simpson for an and-one layup to push Michigan’s lead to double digits.

Zavier Simpson hasn’t been starting for Michigan, but he’s been on the floor in winning time. The sophomore lead guard checked into the game midway through the first half and only left for a couple of minutes the rest of the night.

Simpson has quietly emerged as a very good set shooter from 3-point range. He’s 11-of-24 from deep on the year and has hit two triples in 3 of Michigan’s last 6 games. He’s yet to make a jump shot off the dribble this season, per Synergy, but give him time and space and a good pass and he can knock it in.

Simpson hit two triples in quick succession at Iowa and drew a charge in the middle. His confidence grew from there and he found Duncan Robinson for an open three to stretch Michigan’s lead to 16 points.

“We got after him after that (Jacksonville game),” Beilein said of Simpson. “He didn’t guard his man. Nobody played well against Jacksonville. So we just challenged him to go out and play better. He’s that type of guy, he has to bring it every single night. Defensively, he’s cleaned up a lot of things. He used to foul a lot and he’s really doing some great things.

“He works in the gym so much. He nailed those early threes that we needed to have… If we missed some of those shots, it might be a different story right now.”

The first Livers three was a result of Iowa’s failure to recover after Zavier Simpson breaks the press. The second two were good finds by Simpson, but also a product of how Iowa was defending Michigan with Cordell Pemsl and Livers on the floor. Pemsl is in the paint to help against the drive and doesn’t seem the slightest bit concerned about Livers’ shooting from the corner. 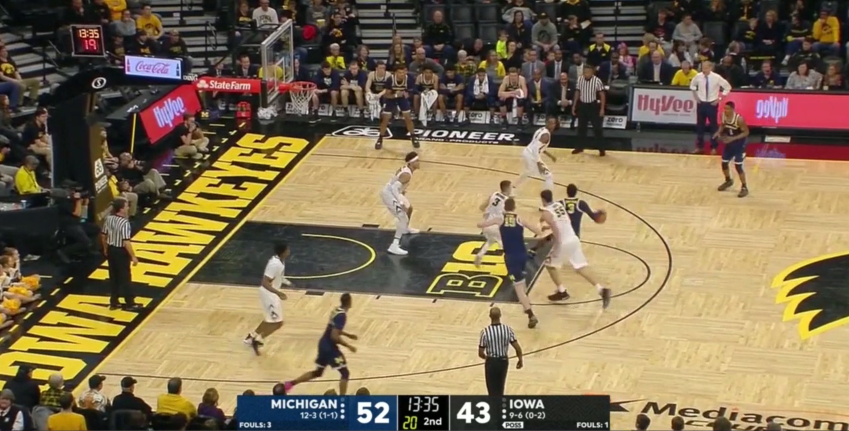 How much of this is due to Pemsl’s physical limitations (he’s a 240 pound traditional power forward) or playing the scouting report (Livers was a 21% 3-point shooter before this game) is tough to gauge, but Livers made the Hawkeyes pay. After watching this game film, I can’t imagine teams will be helping off of the corners nearly as much in coming games.

“It is hard for Duncan to guard some of those guys,” John Beilein said of the four position. “Duncan’s been filling in right there, but Isaiah should be playing more in the future. He’s been working on that jumpshot, his numbers are good in practice but he hasn’t done it in games. Maybe this is a breakthrough.”

Against UCLA, Simpson called his wild circus scoop shot the 3 o’clock. He went with a different angle at Iowa, but came up with another circus finish when Michigan needed a basket most. He got downhill driving to his left and scooped the ball off the glass with his right hand as the shot clock ticked down.

The shot came immediately after a quick Iowa run had trimmed the lead to 8 points and forced John Beilein to call a timeout.

“They made two high-low plays and got it down to (eight),” Beilein explained when asked what the message was in the timeout. “Moe had just missed a point blank layup and Charles missed a 4-foot turnaround which he virtually never misses. That’s the only thing that’s happened right now. They made two easy shots, we missed. Nothing has changed, just keep playing the way you are.”

Zavier Simpson’s basket pushed Michigan’s lead back to double digits, but Abdur-Rahkman’s personal 7-0 run that followed put the game away. The senior guard was back in his pink shoes from last year’s March run and he rattled off 7 straight points with a pair of smooth hesitation drives in transition and an open three from the wing.

Simpson, Livers and Teske rightfully earned much of the spotlight for their performances off the bench, but Abdur-Rahkman had a quiet 15 points, 7 rebounds and 6 assists in 37 minutes on the night.