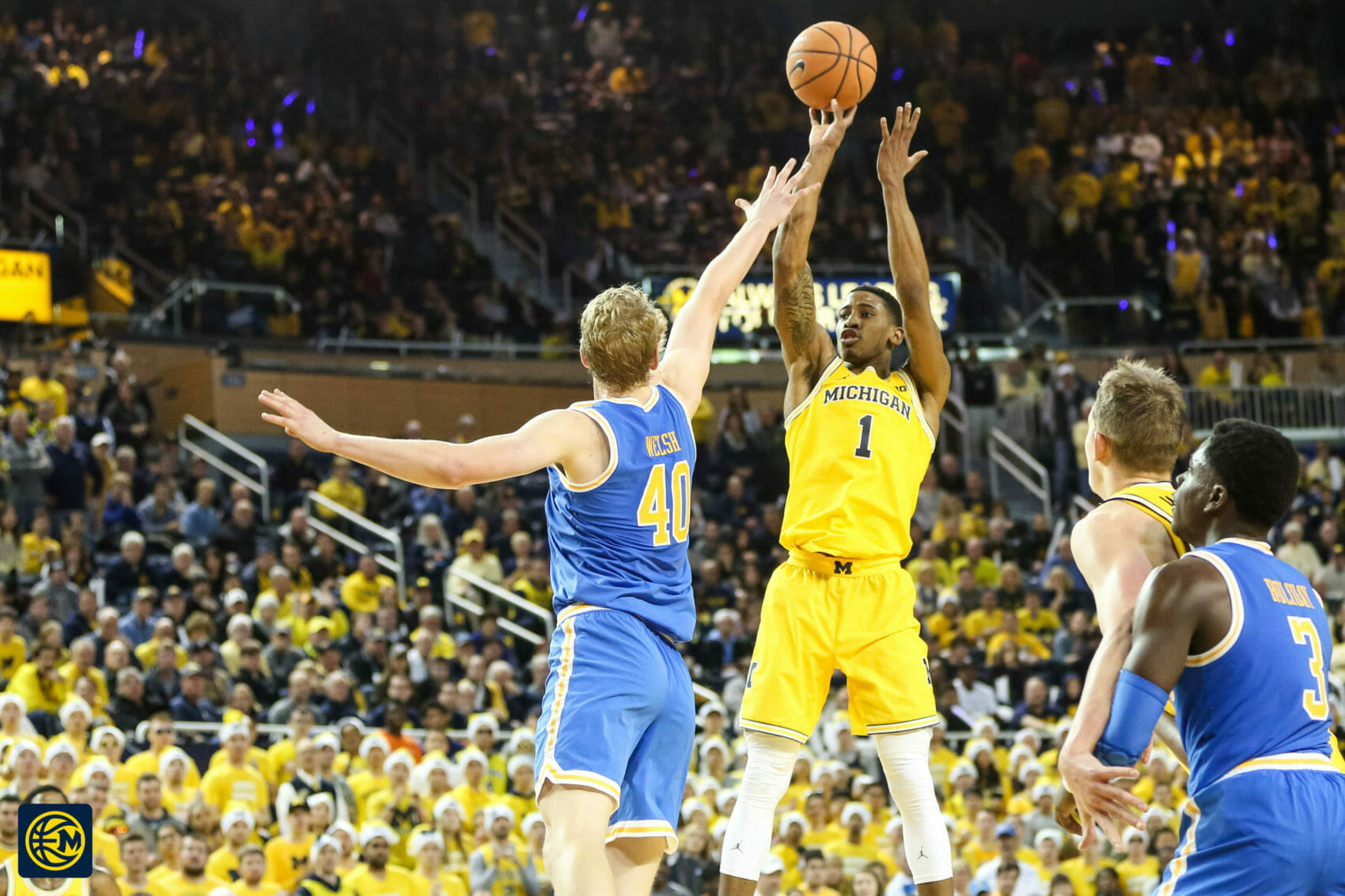 Michigan erased a 15-point deficit in a win over UCLA on Saturday, here are Five Key Plays from the comeback.

Michigan erased a 15-point deficit in a win over UCLA on Saturday, here are Five Key Plays from the comeback.

Down by 15 at home, it was Charles Matthews that got Michigan back into the game. Matthews had a personal 8-0 run that could have been a 10-0 run if he hadn’t missed two out of three free throws.

Matthews hadn’t been great up until this point and heard some stern words from John Beilein, who called him “the MVP for UCLA” on the sideline, but without this scoring outburst this game is probably over. This was the sort of spark that Michigan never got late in the first half at North Carolina or in the second at Ohio State.

Matthews isn’t the only player who makes plays during this stretch either and Michigan’s bench makes timely contributions.

Isaiah Livers grabs a critical offensive board and kicks the ball back out to Matthews for the first open three. On the following possession, Matthews makes the right play and pushes the ball up the floor and finds Duncan Robinson for what should be an open three. Robinson hesitates and ends up throwing it back to Matthews, who has the wherewithal to finish with a reverse layup. On the third bucket, Jon Teske makes a critical tap out rebound and then sets a solid ball screen that allows Matthews to get all the way to the cup.

Matthews got Michigan back into the game, but Wagner’s offensive spark gave the Wolverines the boost to come all the way back. While the German big man almost certainly traveled on his steal and transition dunk, the play brought the Crisler Center to life. Then he snapped into the game offensively with two big threes.

“Moe’s 3-pointers there, they changed everything,” Beilein said.

When Wagner is making pick-and-pop threes, opposing defenses are in a tough spot. The mere threat of the 3-point shot pulls opposing big men further away from the hoop and provides better driving lanes for the ball handler in the pick and roll and also better opportunities for Wagner to attack off the catch.

Wagner has always been driven by his emotions and his best performances, like his worst, seem to snowball from a couple of good (or bad) plays in a row.

Zavier Simpson has been closing games even though the numbers have shown the Wolverines aren’t always as efficient when he was on the floor. Now we know why.

Simpson scored a critical basket out of a timeout, then he locked down Aaron Holiday.

Out of the timeout, Michigan dialed up Muhammad-Ali Abdur-Rahkman on an elevator screen, but UCLA wing Kris Wilkes fought through it and left Simpson in a tough spot with no pass to make. With just 5 seconds left on the shot clock, the 6-foot point guard drove right and stepped through the lane with a wild scoop shot.

“I call that the 3 o’clock,” Simpson said of the circus shot. “I didn’t think it was gonna hit glass, but I knew it was going in once I released and it felt good.”

Simpson’s defense down the stretch on Holiday was very impressive and I’d love to see the deflection data that Michigan charts in each game because Simpson might have some of his teammates doubled up at this point in the season. His hands are active and he disrupted UCLA’s offense. Simpson is now ranked 45th nationally in steal rate while only being called for 2.2 fouls per 40 minutes after being whistled for 5.7 fouls per 40 last year.

His steal with Michigan down three was reminiscent of another Michigan point guard who grew up in Ohio and it gave the Wolverines the break that they needed in the final minute.

Down two with the game on the line, John Beilein went into his bag of tricks for an easy basket. If the play looked familiar, you might be thinking back to Derrick Walton’s game-winning shot at Nebraska.

The set was almost identical as Beilein surprised everyone in the building by going to his freshman point guard who had barely been on the floor down the stretch. Brooks came close to an and-one layup to win the game, but he made both free throws to force overtime.

“I don’t think he’s made two in a row all year long,” Beilein said after the win.

He made them when it counted.

Michigan finally had UCLA on its back foot and it took advantage with a pair of threes to open overtime.

The two shooters? Zavier Simpson and Charles Matthews. I’m not sure that anyone would have projected that, but both players hit open shots on Saturday. Something that can’t be said of many of their teammates with more significant shooting reps.

Matthews is now 10-of-31 from three-point range on the season while Simpson has made an impressive 7-of-14 triples. Simpson’s looks have almost all been off the catch, but are an impressive improvement from a player who only made five 3-pointers as a freshman.