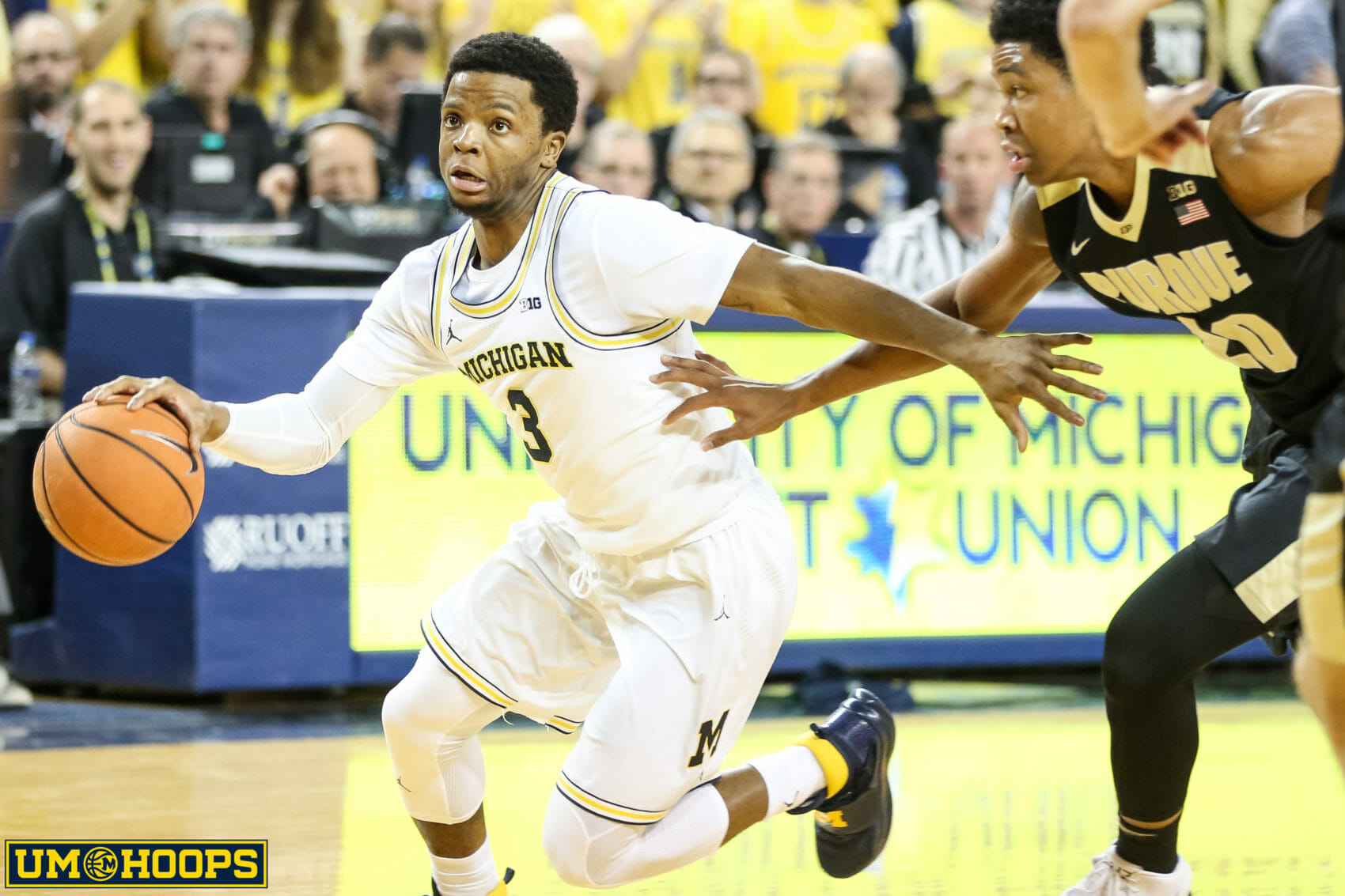 Michigan lost its first home game of the season on Tuesday night, dropping a 70-69 thriller to No. 5 Purdue. Here are five takeaways from the loss.

Michigan lost its first home game of the season on Tuesday night, dropping a 70-69 thriller to No. 5 Purdue.

The game turned on two late calls, both of which went the Boilermakers’ way: an out of bounds call which was overturned to give Purdue a chance to  win it with 5.8 seconds left and a foul called on Moritz Wagner with four seconds left, giving Isaac Haas a chance to put the Boilermakers in front. He did just that, and Charles Matthews’ heave at the buzzer missed. Here are five takeaways.

This wasn’t a feel-good loss

There’s a temptation to view a loss like this — by one point, to a top-five team, after being down big — as a feel-good loss for the Wolverines. It wasn’t, and any doubt to that should be erased by John Beilein’s presser.

The first words out of Beilein’s mouth were, “That one hurts,” a fact evident in his voice over the next 10 minutes and change. He seemed the opposite of encouraged, not just rhetorically, but tonally.

“We had a chance to win this game,” he said. “We got ahead, we couldn’t get stops when we needed to. They made tough shots and then we couldn’t run some of the action that we wanted to run when I called those timeouts. It just blew up in our face and all the sudden the shot clock’s there and I didn’t like down the stretch. I wish we could’ve done better.”

As for the end of the game, Beilein didn’t lay into the referees — in fact, he seemed more angry about the topic after the Illinois game — but defended going without a timeout after Haas made the free throw to put Michigan ahead.

“We had a play ready if the ball goes through the thing,” Beilein said. “With 3.6 (seconds) you can get end to end. So I had my mind made up: if the right guy got it, you can probably get over half-court.”

Matthews ended up getting a clean look, although Beilein critiqued his tendency to take “circuitous” routes to the basket rather than pushing the ball up the middle of the floor.

In a game that comes down to a single possession, there will always be decisions or plays that are easy to pick apart on second thought. Zavier Simpson could have applied Michigan’s foul to give in the backcourt or the Wolverines could have done a better job defending the original inbound play. Maybe Moritz Wagner’s foul against Haas never happens if Beilein puts Jon Teske on the floor for his length and defense.

In any case, Michigan lost a winnable game tonight. That will sting, especially as the schedule heads into a tough stretch with Michigan State waiting on Saturday before a short turnaround for an important Monday night home game against Maryland.

Zavier Simpson has made waves in his development

At the start of the season, the offense would grind to a halt every time Simpson was on the floor. He lost the starting job to Eli Brooks — a decision that made sense at the time and stuck for a while. Then, something just clicked.

Instead of passing up 3-pointers when opposing defenses dared him to shoot, Simpson started taking them. And making them. He’s at 44.8 percent from beyond the arc after hitting two-of-three on Thursday, both in clutch situations.

Simpson was also willing to attack both Isaac Haas and Matt Haarms off the dribble when Purdue switched pick-and-rolls. His finishing is far from perfect, but it’s improved to the point that he can get around big guys at a decent enough clip.

“He’s just learning right now, how you play at this level as far as that big-time high school player and then really had a lot of success as all those things,” Beilein said. “But just like when you go to the pros, there’s a whole ‘nother level of understanding of the game and he’s — every day, he’s learning more and more about, he’s got to evolve as a player. He’s really gotta evolve as a player and he’s doing that.”

Isaiah Livers looks like Michigan’s best option at the ‘4’

At this point, the viability of Livers as the starting power forward has little to do with Duncan Robinson. Though the fifth-year senior is slumping again — he’s just four of his last 16 from beyond the arc, including 0-for-2 on Tuesday — Livers has played his way into a the conversation.

Livers played all of crunch time and did his part on both ends, knocking in every shot he took from the floor and the free throw line while playing good defense. At 2:55, he finished a drive with a swim move and a layup to put the Wolverines up 3. That turned out to be the last basket Michigan scored all night.

“I noticed once I came in, it was a major difference (in the game) and I didn’t know at first,” Livers said. “Coach (Beilein) was like, ‘Yeah, you’re making a difference out there. Just keep doing what you’re doing,’ at halftime. I was like, ‘Alright Coach, I got you.’ Just continued to do the same thing in the second half.”

Livers demurred when asked about his role, but it’s hard not to think he’s getting close to a starting spot. As of right now, he’s a better player than Robinson on both ends of the floor.

“I think that Isaiah is playing way above what I expected from two months ago,” Beilein said. “…I thought between him and (Vincent) Edwards — that was a great dual between a senior and a freshman.”

Beilein mentioned on Saturday that if reporters had seen early practices, they would have questioned whether or not Livers should have a scholarship at all. Now, he could be a lynch-pin to the Wolverines’ Big Ten success.

Michigan’s freshman class struggled to make an impact early on this season. Jordan Poole found himself on the outside of the rotation, whereas Livers was seeing single-digit minutes most games. As recently as mid-December, Eli Brooks was the only player on the Michigan roster who had carved out what seemed to be a defined role on the team.

Against Purdue, not only was Livers the best player on the floor for stretches, but Poole provided a familiar bench spark, scoring eight points in seven minutes. Brooks — whose playing time has decreased in the last handful of games — had a nondescript stat-line in eight minutes, but the three were on the floor for two notable stretches.

In the first half, the three freshmen sparked an 8-0 run to pull Michigan within two. In the second, the three of them were on the floor together for a short time, but managed to make an impact, as a Brooks offensive rebound led to Poole being fouled on a 3-pointer. The ensuing free throws pulled the Wolverines within one.

“I didn’t think (the moment was too big),” Beilein said. “It certainly isn’t for Jordan Poole. He wants it and we gotta continue to find ways to get him on the floor. I was thinking — until X hit those two 3s — to let Muhammad run point, but all the sudden X hits the two 3s.”

Added Livers: “We just credit to Coach B, he trusts us. I mean, he’s at this point now, where he feels like he can have all three freshmen on the floor at the same time and still produce just as much as the starters can.”

Michigan can compete with anybody on its home floor

After playing a game they should have won against a team as good as Purdue, it feels safe to say Michigan is a really, really hard team to beat at Crisler Center.

“I think if the (replay review) goes the other way, I think we come out on top,” Livers said after the game, referencing the play that gave Purdue the ball with 5.8 seconds to go.

At 69-69, it’s possible Michigan misses a shot and loses in overtime, but the Wolverines would have been in a great position. A baseline out of bounds with enough time to get what you want is an enviable spot. There’s a decent chance we’d be talking about Carsen Edwards messing up Purdue’s shot at a 2-for-1 had the call gone the other way. Ditto for the foul on Wagner.

This was also a game in which the Boilermakers shot 57.1 percent from 3. Some of that is on Michigan for letting them have 21 attempts — an area in which the Wolverines have excelled all year — and Beilein called 3-point defense “the difference in the game.” However, it feels safe to say nobody will shoot that well from 3 against Michigan the rest of the year, even if the Wolverines don’t guard the line at all.

That won’t change anything — there are no moral victories to be had. Teams are supposed to win home games in conference play and Michigan will need to do just that moving forward. The Wolverines are projected as favorites in their six remaining games at the Crisler Center, per KenPom, and defending tome court will be critical to their NCAA Tournament resume.