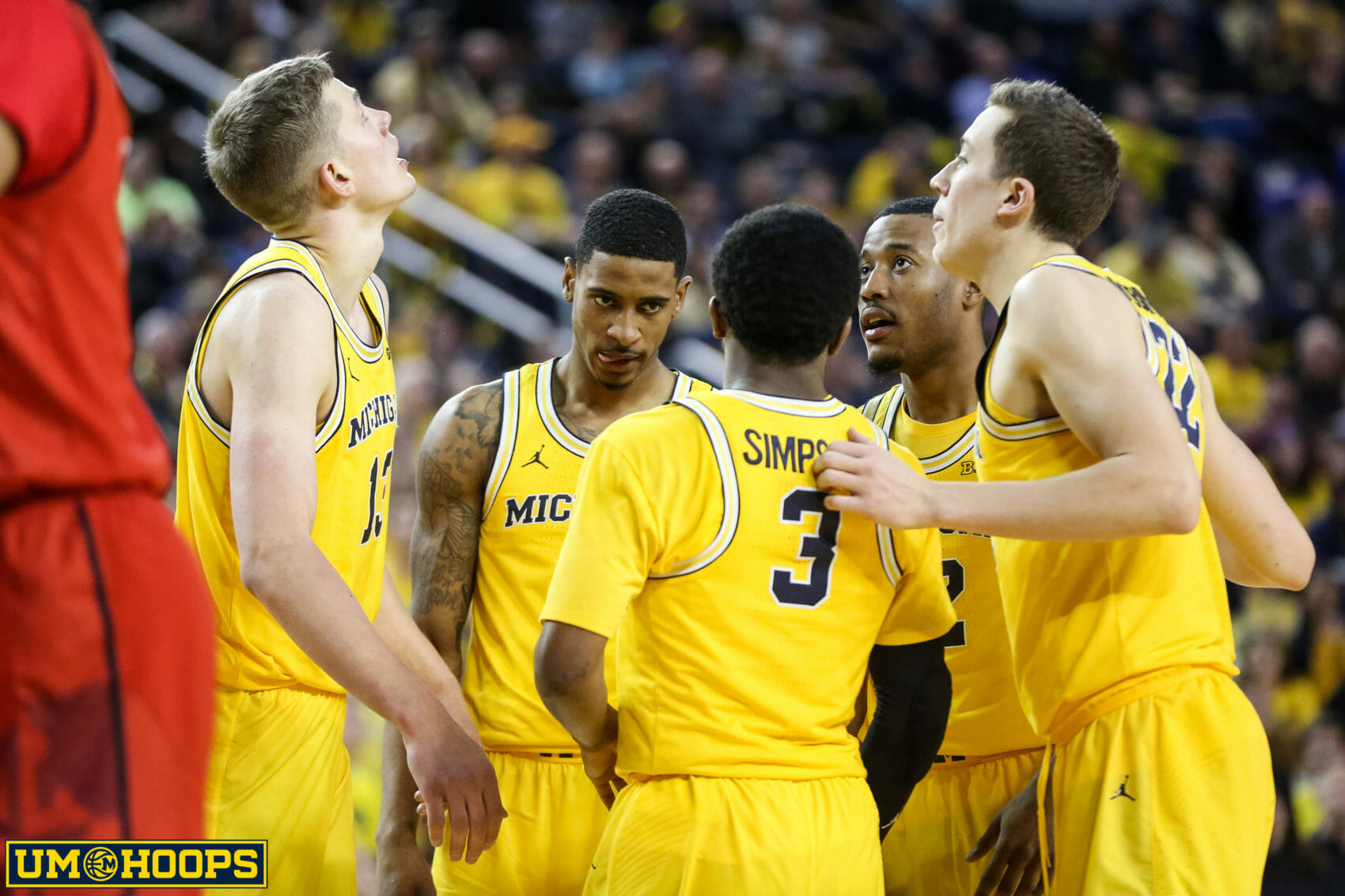 The week of good feelings for Michigan basketball ended swiftly on Thursday. Nebraska wiped the floor with the Wolverines in Lincoln, holding them to just 52 points — a season-low — and winning by 20. Here are five takeaways.

Since the start of Big Ten play, the crux of Michigan’s offense has been fairly simple: get the ball to Moritz Wagner in pick-and-pop situations. Against most teams, that forces the defense to make an excruciating choice: put their center on the 3-point line to defend Wagner, trap or hedge the ball-handler and cede an open 3-pointer, or switch and risk being posted up (or the reverse — leaving a center on Zavier Simpson or Muhammad-Ali Abdur-Rahkman.)

Those problems didn’t exist for the Cornhuskers, who fearlessly switched every screen and reaped the rewards. All night, every one of the Wolverines’ options was cut off with surprising ease.

“(Nebraska) just switched everything, and we were trying to make feeds inside,” said John Beilein “… It’s a great thing to have when you have a bunch of 6’8 to 6’7 guys that are interchangeable and can do a lot of things. It’s the way we play a lot of times. So we couldn’t utilize any height advantage inside. And I think we only had four, five open 3s the entire game, and I don’t know if we made any of them.”

It shouldn’t be overlooked that the Cornhuskers have the personnel to switch, unlike a lot of other Big Ten teams. However, that doesn’t mean other opponents won’t try to do it. Purdue already had success switching last week. Now that another game of evidence has been added to the pile, other teams will only be encouraged to break the proverbial glass and switch.

“That’s kinda my fault,” Wagner said. “I like the pick-and-pop so much, so people try to take that away.”

One in a long line of ugly stats from Thursday: Michigan turned the ball over 12 times, and 9 times in the first half, stifling any chance the Wolverines had of cutting into the lead.

Especially in the first half, when the game was still in play, turnovers made it impossible to build momentum. Even on what should have been positive plays for Michigan — an offensive rebound from Abdur-Rahkman, or Jordan Poole seeing Charles Matthews open on the free throw line — the Wolverines managed to cough the ball up.

“That’s what got us behind in the beginning of the first half,” Matthews said. “We weren’t taking care of the ball, and they were getting easy transition baskets.”

When the Cornhuskers’ lead was cut to eight in the second half, Charles Matthews had an outlet pass picked off by Isaiah Roby. Instead of trying to contest the shot, Matthews tried to take a charge. Roby ran around him with a simple Euro-step.

Minutes later, with Nebraska’s lead at 10, Isaiah Livers stole away an inbounds pass. He immediately returned the ball to Nebraska and Isaac Copeland buried a fallaway jumper from the post on the ensuing possession. It was that kind of night.

“It’s unexplainable,” Beilein said. “I don’t know what we were doing a few times. And then in the second half we’re down eight, we get a rebound and throw it right to them. There’s some things we really gotta grow in.”

Even after Thursday, Michigan’s turnover percentage sits at 14.9 percent, per KenPom — good for ninth in the country. That’s what made it jarring to see so many. Fatigue was certainly a factor — the Wolverines were on the road, playing a 9:00 game that got delayed to 9:12, just three days after a one-point win over Maryland.

But that wasn’t the only factor. Michigan was beaten in every facet of the game by Nebraska’s defense, which also played on Monday night, and this was one of them.

Michigan made just four 3-pointers, a season-low. It shot 22.2 percent from beyond the arc, also a season-low. And without them, the Wolverines couldn’t score.

“We didn’t make shots,” Wagner said. “We were like, I think I saw up there we made 21 shots today. That’s not a lot for a whole basketball game. When you don’t make shots they make shots, on the road especially, that’s just tough, man, you gotta be better than that.”

Like everything else in a game like this, some of the struggles can be explained away. Michigan missed a slew of open 3s — shots it has and will make on other days.

However, there was more to it than that. Wagner only attempted one triple because Nebraska took away his favorite shot. Not only that, but because they switched, the Cornhuskers had no need to rotate elsewhere. Michigan’s 18 3-point attempts were its second-lowest of the year.

That’s no problem when the Wolverines can score inside — they only shot 15 from beyond the arc against Michigan State. But when a defense switches, the switch itself is the only reaction necessary. Lanes don’t open up. It’s an invitation to isolation basketball and Matthews has been the only Michigan player to look for those baskets this year. He finished 6-for-10 from the field tonight — the best of any Wolverine by far. As for everyone else, they have to either embrace isolations when necessary, or find a way to move the ball more effectively against switches.

The third of those occurred fairly late in the game and fairly late in the shot clock. Poole fouled Glynn Watson with no reason for contact to ever have happened in the first place and, with the Cornhuskers in the bonus, Watson hit both of his free throws, bringing Nebraska’s lead to 18. As the free throws happened, Beilein was giving the freshman an animated lecture.

“There’s nine seconds on the shot clock, he knows that– we all know that,” Beilein said after the game. “It’s one thing we’re going to preach a lot. All our guys, this is a great lesson against a good team.”

Nebraska got to the line effectively all night, attempting 23 free throws, but Poole’s consistency, especially on the road, is still a work in progress.

After Thursday, Poole is shooting just 33.3 percent from the field on the road. It’s not the largest sample, but given who he is as a player, it makes sense. When he can’t feed off the crowd at Crisler, occasional struggles become regularities. Performing on the road is as big a part of the next step for him as anything.

The point guard situation is back in flux

Just when we all thought the point guard situation was done and settled, things got scrambled yet again.

After seeing a severe cut in his minutes at the start of Big Ten play, Eli Brooks was completely out of the rotation against Nebraska, playing five minutes once the game was out of hand. In his stead, Jaaron Simmons has seen first-half minutes in each of the last two games.

Like the rest of Michigan’s offense, the results were far from positive as Michigan never managed to creep back into the game.

There were, however, some brief flashes: an Abdur-Rahkman-Jon Teske pick-and-roll that got the senior guard to the free throw line, a Wagner defensive rebound volleyballed ahead to Abdur-Rahkman, who found Poole for a transition dunk.

It’s worth being intrigued about the possibility of extended time for Rahkman at the position, mostly because it gets freshman guard Jordan Poole on the floor for additional minutes. With Rutgers coming to Ann Arbor on Sunday, Michigan will likely be able to experiment and that could be one thing Beilein tries.