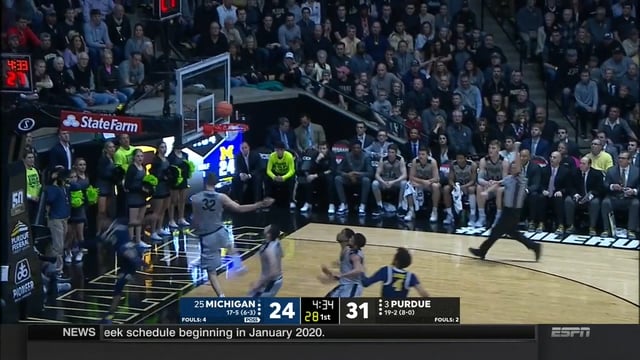 If Thursday’s game was a fight, then it was a heavyweight bout between two teams that look well-equipped to make some noise this spring. In the end, though, it was No. 3 Purdue that emerged victorious, yet again, against No. 25 Michigan, in a 92-88 barnburner.

The Wolverines, buoyed by strong play from senior guard Muhammad-Ali Abdur-Rahkman, could not pull away from the Boilermakers in the second half despite battling back from a deficit and taking the lead (multiple times).

You wouldn’t have ever believed in the above phrase last year. But as Zavier Simpson has blossomed into Michigan’s starting point guard, he’s begun to tap into the scoring ability that made him a much-hyped recruit out of high school.

It wasn’t Abdur-Rahkman or Moritz Wagner or Charles Matthews who led the team in scoring after the first half. It was Simpson, with eight points that he poured in near the end of the first twenty minutes.

Of course, Simpson’s scoring run began with defense. First, he stole an entry pass intended for Vince Edwards before finishing in transition while getting fouled, converting the and-one at the line.

Then, in a 48-second stretch, Simpson hit a 3 before bobbing and weaving through the lane for a layup. The Wolverines couldn’t completely close the gap before the first half ended — but Simpson’s outburst was a big reason things didn’t get worse for Michigan.

2. Michigan scores on first eight possessions of second half

Halfway through second half, the Wolverines were averaging over two points per possession and managed to score 32 points in their first 14 trips down the floor.

That stretch included eight consecutive scoring possessions to open the half.

It began with a Charles Matthews putback. Then Muhammad-Ali Abdur-Rahkman scored over Vince Edwards on a switch. From there, Moritz Wagner got involved, putting back his own miss and then knocking in a pick-and-pop three.

Abdur-Rahkman buried a three of his own next, spinning past Carsen Edwards and pulling up from deep. Then Simpson got involved, finding Matthews for transition dunk to give Michigan the lead and then blowing by PJ Thomspon to put Michigan in front again.

An NBA-range 3-pointer by Abdur-Rahkman ended the eight possession stretch of perfect offense, but it only put Michigan ahead by 2 points. The Boilermakers were having no problems scoring on their own.

The offense was red hot — yet it slowed down with a series of small mistakes that allowed Purdue to create some breathing room.

The first error came courtesy of Jaaron Simmons — his second of three turnovers in as many minutes of playing time. Then Duncan Robinson was whistled for a foul on the resulting fast break, sending Vince Edwards to the line, where he sank both to break a 68-all tie — the final lead change of the game.

“We had two turnovers, just like really bad turnovers,” Beilein said after the loss. “We had a turnover taken out of bounds, turnover on moving screen and had two more.”

The mistakes only piled up. Simmons was called for a moving screen on the ensuing trip down the floor. Abdur-Rahkman, previously a 91 percent free-throw shooter, missed a pair. And at the end of it, the Boilermakers had ripped off an 11-2 run to take a nine-point lead.

“You can’t win a game without defense — they scored 92 points today,” said junior forward Moritz Wagner after the game. “We gotta do better defensively.”

But Moe Wagner wouldn’t let his team go down just like that. Coming out of a timeout, Wagner canned an open 3 from the top of the key to cut Purdue’s lead to six. Then he took advantage of Isaac Haas’s absence from the game, selling a pump fake to Matt Haarms before blowing past the freshman backup and finishing at the rim.

Wagner’s little 5-0 run cut the deficit to four and swung momentum his team’s way. Yet the Wolverines were unable to take advantage of the opening.

The tactic didn’t immediately prove fruitful for Matt Painter and company. Haas missed. Then Dakota Mathias bricked a free throw, and then a 3-pointer. With 2:04 remaining, Purdue called another timeout after coming away empty-handed on six consecutive possessions, a stretch that began just after Wagner’s 3.

Yet Michigan, after cutting it to four, couldn’t completely close the gap. Matthews turned it over. So did Wagner.

And things took a turn for the worse after that second timeout from Purdue. Slick shooting from the Wolverines wasn’t enough, as the Boilermakers scored several key buckets — and hit 11-of-12 free throws — to put the game away.

“It’s going to be a bad loss if we continue to make a couple of mistakes that we made today turning the ball over,” Beilein said. “And so there’s got to be a point here soon with our team and we’re playing really high quality teams like that that the mistakes we made are not ones that haven’t been made before.”