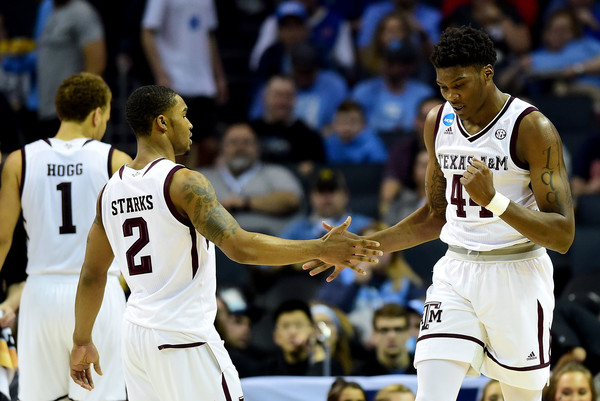 Michigan will make its fourth appearance in the Sweet 16 in the last six years on Thursday night at Staples Center (7:37 p.m., TBS).

Michigan will make its fourth appearance in the Sweet 16 in the last six years on Thursday night at Staples Center (7:37 p.m., TBS).

The Wolverines will face the Texas A&M Aggies, a team that rode a rollercoaster of dramatic ups and downs through a season littered with injuries and suspensions. Only one Texas A&M player (big man Tyler Davis) has played in every game this season.

The Aggies opened the season with a blowout win over West Virginia and started 11-1, peaking at No. 5 in the top 25 polls. Then they lost their first five SEC games and came crashing back to earth. They pulled things together down the stretch and fought their way into the NCAA Tournament and now have the opportunity to make the Elite Eight for the first time in program history.

Texas A&M enters the Sweet 16 with the No. 65 adjusted offense and No. 9 adjusted defense. Despite the impressive national ranks, the Aggies struggled to a .500 record in SEC play and were outscored by 2 points per 100 possessions with the league’s No. 10 offense and No. 10 defense.

The Aggies were not a great team in the SEC, but they have clearly demonstrated that they have an impressive ceiling when everything clicks. They dismantled North Carolina on Sunday and have impressive wins over teams like Kentucky, Auburn and West Virginia.

Offensively, everything runs through Texas A&M’s massive frontcourt. Texas A&M has a very good post up offense and the strength of its offense is the ability to crash the glass. The Aggies rebound 34% of their misses on the season, 29th nationally, and are one of the better offensive rebounding teams that Michigan will face this year.

On defense, Texas A&M does a great job around the rim. Teams are shooting just 51% at the rim against the Aggies and 45.1% on 2-point attempts overall. A&M is ranked 8th nationally in block rate and defends the three teams are shooting just 31.8% from 3-point range ,but that number spiked to 36.1% in league play. Overall, Texas A&M allows a fairly average ratio of 3-point attempts (37.5% of FGA).

Texas A&M generally loses the turnover battle. They give the ball away on 19.2% of possessions (232nd) and only force turnovers on 15.4% of possessions (327th). Michigan should be able to forge an possessions advantage on both sides of the ball. Another interesting element of the A&M defense is that 57.6% of opponent makes are assisted, a figure which ranks 298th nationally.

We broke down the Aggie rotation in detail with our matchup breakdown, but here’s a rundown of the primary threats .

Junior big man Tyler Davis is listed at 6-foot-10, 264-pounds and is a wide bodied load in the paint. He’s an elite offensive rebounder, good shot blocker and does a great job of drawing fouls (47.5 free throw attempts per 100 field goal attempts). Davis is the best low post scorer on the A&M roster and he also can face up a bit from the baselines.

If Davis provides the muscle inside, Robert Williams provides the above the rim athleticism. Williams isn’t a high usage offensive player, but he is an elite finisher who can change the game with his defense. He’s ranked 23rd nationally in block percentage, 22nd in defensive rebounding rate and was the SEC Defensive Player of the Year. Williams will have his highlight dunks and blocks, but Michigan’s key will be pulling him away from the basket.

On the wing, the Aggies rely on a lengthy shooter in 6-foot-9 forward DJ Hogg. Hogg has a lot of length, but he is primarily a perimeter-based jump shooting player. He attempts 60% of his shot attempts from behind the arc and connects at a 38% clip.

6-foot-4 junior Admon Gilder is one of the most efficient players on the A&M roster and he shoots 50% on twos and 40% on threes with close to a 50-50 split. He’s not a big playmaker for others, but he can attack closeouts and get to the rim.

Freshman guard TJ Starks has assumed the starting point guard role almost by default with graduate transfer Duane Wilson out for the season and former starter JJ Caldwell dismissed. Starks is a guy who can heat up quickly with his off the dribble jumper, but he’s been plagued by turnovers this year — averaging 4.8 per game over A&M’s last 5.

Tonny Trocha-Morelos is one of the more intriguing pieces off the bench for the Aggies. He’s a 6-foot-10, 223-pound senior who can provide an additional offensive rebounding and shot blocking option. He’s not the most efficient player, but he can step outside and attempt the 3-point shot (25-of-81).

Michigan has fared well overall this year against bigger teams that like to play inside-out. The Aggies resemble Michigan State in a lot of ways, at least in their lineup construction, and should pose an interesting challenge for Michigan’s five-out offense. KenPom projects a 68-64 Michigan victory, giving the Wolverines a 62% chance at advancing to the Elite Eight.