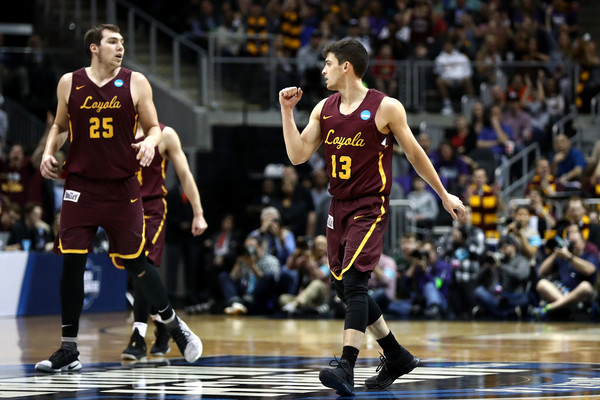 Michigan will face the Loyola Ramblers on Saturday evening (6:09 p.m., TBS) for a chance to play for the National Championship.

Michigan will face the Loyola Ramblers on Saturday evening (6:09 p.m., TBS) for a chance to play for the National Championship.

The Wolverines have had a relatively easy path to get to this point, avoiding any games against top 5 seeds, and that trend will continue against the No. 11 seeded Ramblers. Loyola is a team that mirrors Michigan in many ways and should provide a strong test of discipline and execution. Expect a low possession game, with both teams ranked 315th or lower in adjusted tempo, and a lot of half court offense.

Loyola head coach Porter Moser referred to his offense as “pace and space” and the spacing that is created by having multiple shooters on the floor. The Ramblers shoot 56.8% on twos (9th) and 40.2% on threes (11th) for a 58 eFG% (5th) and are one of the best shooting teams in the country. Six of the Ramblers’ top seven rotation players shoot at least 37% from 3-point range and have made at least 20 3-pointers this season.

Loyola’s offense only ranks 59th nationally despite its elite shooting. The primary reasons for that discrepancy are turning the ball over — Loyola gives it away on 18.9% of its possessions (20.2% in the NCAA Tournament) — and the inability to get to the free throw line.

The Loyola defense might not draw many headlines, but it is ranked 19th nationally in adjusted efficiency.  The Ramblers don’t block shots or overwhelm teams with great length (only one rotation player is taller than 6-foot-6), but they win games with their fundamentals. They do a terrific job of not fouling (15th nationally in defensive FTA/FGA) while still contesting shots. Teams are shooting just 46.8% on twos (55th) and 32.2% on threes (30th) for a 47.4 eFG% (31st) against Loyola.

Loyola has a great ball screen defense, ranked in the 86th percentile nationally, but grades out in just the 27th percentile against the ball screen roll man. The Rambler defense does a terrific job of forcing difficult mid-range shots and 19.3% of opponent possessions against Loyola end in an off the dribble jumper that teams knock down at just a 36.6 eFG% clip.

If you missed it earlier this week, make sure to check out our in-depth matchup breakdown with shot charts and scouting video.

Clayton Custer is the go-to guy in Loyola’s offense. He’s an elite pick and roll scorer with a lethal mid-range jump shot off the dribble and a great 3-point shot off the catch. He’s shooting 58% on twos and 47% on threes for the season and leads the Ramblers in assist rate.

Custer’s high school teammate starts next to him in the back court, 6-foot-3 senior Ben Richardson. Richardson is a lower usage player, but he was named Most Outstanding Player of the South Region after he he scored 23 points including 6-of-7 3-point shooting in the win over Kansas State.

Marques Townes is Loyola’s best athlete and the majority of his offense comes in transition or cutting to the rim. Townes is great at attacking poor closeouts and he is one of the few players on Loyola’s roster who should be defended more as a driver than a shooter.

Donte Ingram is a versatile combination forward who can score inside and out. He shoots 40% from 3-point range and attempts over half of his shots from beyond the arc. He can shoot it off the catch or bounce and is also Loyola’s best defensive rebounder. Ingram is probably a more versatile scorer than Townes and I’ll be interested to see how Michigan juggles the matchups between Duncan Robinson and Charles Matthews against Townes and Ingram.

Cameron Krutwig is the pivot matchup in this game. Krutwig is Loyola’s only true big man and he’s an effective scorer around the basket (61%). He can pass the ball and moves fairly well offensively, but doesn’t seem like a great option to chase Wagner around the perimeter. The efficiency numbers say that the Ramblers are a better team with Krutwig on the floor rather than their small lineup, but that might not be the case against Michigan.

Sixth man Aundre Jackson was a preseason All-MVC player but was relegated to the bench after the Ramblers discovered that Krutwig gave them a more dynamic option at the five spot. Despite coming off the bench, Jackson could play a very important role in this game with his ability to play as a small ball five and give Loyola more flexibility in its ball scree ndefense.

Lucas Williamson is the primary perimeter backup off the bench. Like the starters ahead of him, Williamson is a great perimeter shooter. He knocks in 43% of his 3-point attempts with 65% of his shots originating beyond the arc.

Last weekend, Michigan started things off with a big win over Texas A&M in a game that quickly spiraled out of control. The Aggies beat themselves with turnovers and poor transition defense. Don’t expect this Loyola team to beat itself, expect the Ramblers to keep the game in control at a slow pace and hang around all night. KenPom projects a 65-60 Michigan victory, giving the Wolverines a 67% chance of playing on Monday.