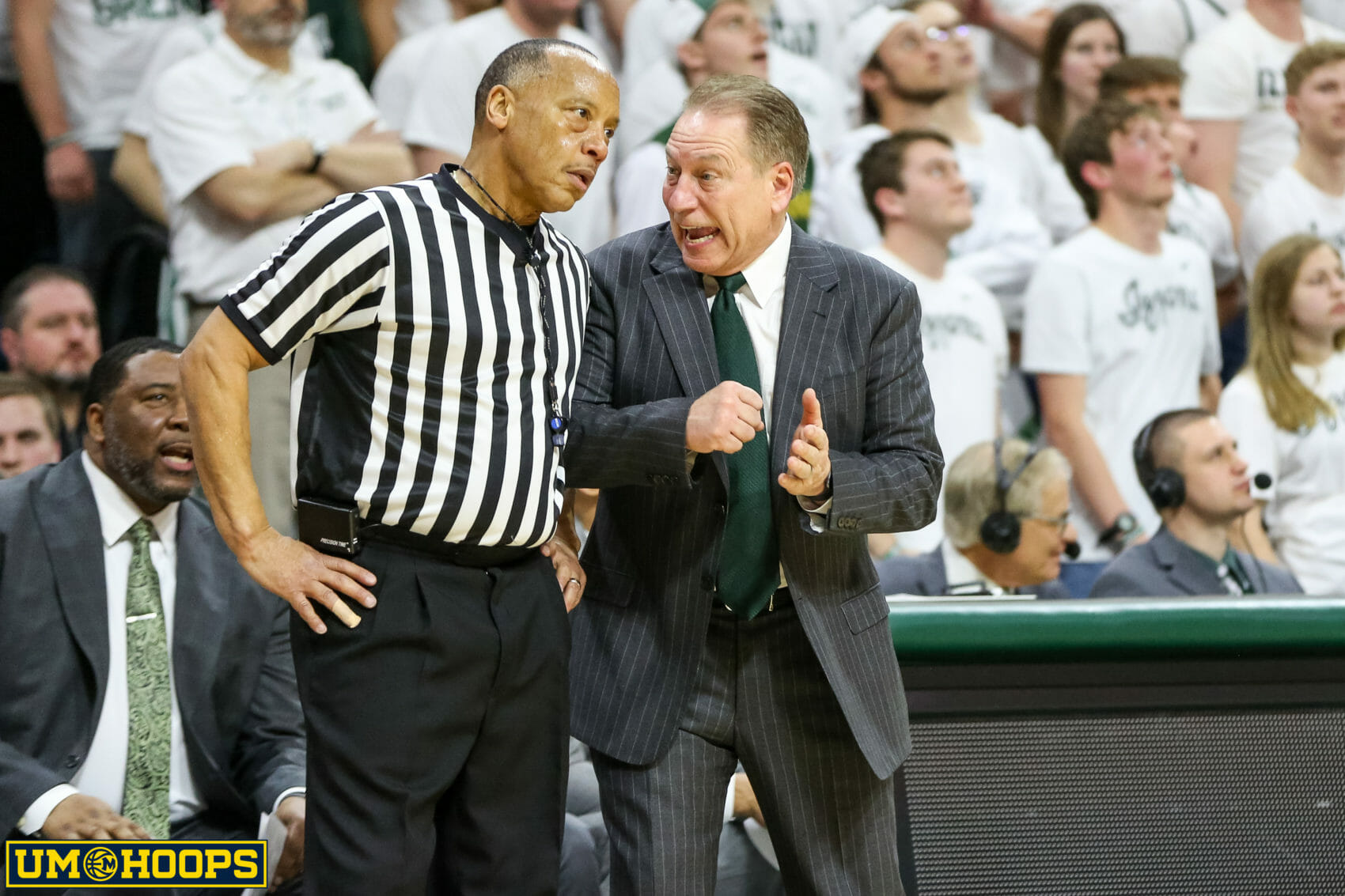 The Athletic surveyed 28 beat writers from the Big Ten to conduct the official unofficial media poll ahead of the 2019-20 season, a chore that is required because the conference doesn’t announce a true 1 through 14 preseason ranking.

I was invited to participate and decided it was worth sharing my ballot and my preseason thoughts on each team. Here’s are my picks with differences from the poll results denoted in parenthesis.


Get UM Hoops for 2019-20. For a limited time only, sign up with the promo code UNDERRATED to get an annual membership for less than $3 per month.


Michigan State is the clear cut favorite in the league. In a year where the Big Ten feels down overall, Michigan State stands out not just a Final Four contender but a national favorite. Cassius Winston might not project to be a first-round pick in the NBA, but he’s the best offensive player in college basketball. Maybe the projection system is broken.

The Spartans discovered how to build their offense around Winston midway through the 2018-19 season. Now they get to build off of that success. Losing underappreciated shooters and defenders Matt McQuaid and Kenny Goins will hurt, but the cupboard is stocked. Aaron Henry and Xavier Tillman have All-Big Ten potential and youngsters like Rocket Watts, Malik Hall, and Gabe Brown should all contribute.

Mark Turgeon is 47-33 in Big Ten games and Maryland punched a ticket to the NCAA Tournament in four of five seasons since joining the conference. Despite that success, Turgeon is one of the most maligned coaches in the Big Ten. That stems from below-average performances in the NCAA Tournament and the fact that he’s recruited so much talent in College Park.

Maryland finished last year ranked 349th in experience and made the second round of the NCAA Tournament with freshman or sophomores filling seven of the top eight spots in the rotation. Bruno Fernando is gone, but the rest of that group is back with Anthony Cowan Jr. leading the way as a senior. Cowan’s 3-point shooting will need to bounce back, but the Terps have NBA talent, a pair of 40% 3-point shooters and an impressive five-player recruiting class.

Picking Purdue to finish third in the conference feels bold, but college basketball is a coach’s sport, and Matt Painter is my favorite coach in the Big Ten. The Boilermakers had a two-man offense last season and lost both pieces. Painter has to build an offense around two post players, a point guard who can’t shoot, a grad transfer from High Point and two sophomores who I think have the chance to break out in Aaron Wheeler and Eric Hunter. It’s a scrapheap year, but I will bet on Painter to get the most out of this roster.

I’m down on the prospect of building a team around 6-foot-9 center Kaleb Wesson given his inconsistency and foul issues. Wesson is capable of dominating a game, but he was efficient and productive last season, and Ohio State still had the second-worst offense in the Big Ten. The key to an improved offense is developing a more reliable perimeter attack. The Buckeyes shot the second-most threes in the Big Ten but only made them at a 32.1% clip (10th).

Illinois is a trendy pick this year, and I’m buying stock. The Illini weren’t good last year. It appeared they had figured things out in February, winning five out of six, only to turn around and lose five of their final six regular-season games.

We know that Brad Underwood’s offense can work at the highest level and the Illini have some impressive pieces including Ayo Dosunmu and Giorgi Bezhanishvili. I think it is time for Underwood to throw out his pressure defense, as he did during his NCAA Tournament year at Oklahoma State, but either way I think this is group is talented enough to make the NCAA Tournament.

What do you do with Michigan? The Wolverines lost their head coach, top recruit and top three top scorers from a season ago but also have one of the most proven and experienced trios in the league to build around. Can Franz Wagner, Eli Brooks, Colin Castleton, Brandon Johns, Cole Bajema and David DeJulius fill in the gaps? It is certainly possible, but with the added uncertainty of a first-year head coach, it is hard for me to pick Michigan higher than sixth.

Ethan Happ was one of the most critical players in college basketball last season but some of Happ’s flaws as a player limited Wisconsin’s ceiling. He led the Badgers in points, rebounds, assists, and steals, but he also struggled to make jump shots or free throws. We don’t know what the returning pieces on the Badger roster are capable of doing without Happ. For better or worse, we’ll find out this year. D’Mitrik Trice is an underrated ball screen scorer and Nate Reuvers is a trendy breakout pick, but there are significant questions about this team’s offensive ceiling.

I’ve never been a fan of Richard Pitino so picking Minnesota eighth in the league leaves me a bit queasy. The Gophers were 11th in the league poll, but I think there’s talent hiding in plain sight in Minneapolis. The losses of Jordan Murphy and Amir Coffey are significant, but there are pieces to work with.

Gabe Kalscheur made 41% of his threes as a freshman and Daniel Oturu is one of the best young bigs in the league. Both players should be expected to expand their games as sophomores. Around them, Pitino will look to build with transfers — who are generally undervalued in preseason projections — and freshmen.

Pitt went 0-18 in ACC play when Marcus Carr was a freshman, but he posted the second-best assist rate in the ACC. With a year of development, he will provide a boost for a Minnesota team that primarily played without a point guard last year. Four-star freshman Tre Williams, Vanderbilt transfer Payton Willis and Drexel transfer Alihan Demir, who averaged 15 points and six rebounds per game last year, round out a Minnesota roster that could surprise.

I picked Indiana to win the league last year in a move that backfired spectacularly. The Hoosiers were a better team than their 19-16 record — evident by sweeping Michigan State — and Archie Miller will be facing some pressure this year with a roster that won’t get anyone too excited. It might just be the perfect time for a complete reboot. Look for the Hoosiers to play in the paint this year with De’Ron Davis, five-star big man Trayce Jackson-Davis and Butler transfer Joey Brunk. If the backcourt can improve and Jerome Hunter is healthy enough to contribute, this team could sneak its way into the NCAA Tournament.

Health is a significant concern with Iowa given the summer speculation that Jordan Bohannon could miss the season with a hip injury. Joe Wieskamp and Luka Garza are both efficient scorers, but I can’t buy into an Iowa team without a point guard after watching the Hawkeyes finish 13th or worse in conference defensive efficiency over the last two seasons.

Computer rankings are buying into Penn State after it finished 7-3 over the final ten games of the 2018-19 regular season. I’m more hesitant to buy into the Nittany Lions given that the stretch was preceded by an 0-10 start and only included two wins over NCAA Tournament teams (both at home). Pat Chambers has never finished above .500 in Big Ten play, and a team built around Lamar Stevens’ inefficient offensive production doesn’t seem like the group to snap the drought.

Steve Pikiell has things moving in the right direction at Rutgers, but an offseason transfer from his best player will slow down the progress. There are still some weapons here with Geo Baker and Ron Harper Jr. back along with Texas transfer Jacob Young, a volume 3-point shooter. Stony Brook transfer Akwasi Yeboah looks to be essentially a mid-major version of the departed Omuryi.

Fred Hoiberg’s teams at Iowa State were some of my favorites to watch in college basketball. They played an uptempo perimeter-oriented style that I find incredibly easy on the eye. That style will be a welcome addition to the Big Ten’s basketball landscape, but the results might not come in year one. Hoiberg will be working with a roster that he essentially built from scratch this summer. How Nebraska’s group of transfers fits together this year is anyone’s guess, but I’m certainly excited to watch.

Not much has gone right for Northwestern since making the NCAA Tournament in 2017. The Wildcats are just 10-28 in their last 38 Big Ten games and have to replace their top two players from last year’s roster. The hope will be that AJ Turner, Pete Nance, and Miller Kopp make significant offseason leaps while lacrosse star Pat Spencer and Talor Battle’s half brother, Boo Buie, can bring improvement to the backcourt. Is it possible? Sure, but I’m not betting on it.

Cassius Winston is an easy pick for Big Ten Player of the Year. He won the award last year and decided to return for his senior year. The fact that he isn’t a unanimous pick in this year’s poll feels criminal. His combination of ball screen feel, passing ability, and perimeter shooting is unmatched in college basketball. I think Zavier Simpson and Anthony Cowan are easy picks to join him on the first team given their importance to their respective teams as senior point guards.

The last two spots were a bit more complicated. I opted to go with raw talent and picked Ayo Dosunmu and Jalen Smith to round out my team. Both players were excellent as freshmen but certainly didn’t play at a first-team all-conference level.

I don’t love having two players from Maryland on the first team, but I wasn’t going to consider Lamar Stevens given his inefficiency or Kaleb Wesson. Counting stats remain (almost) undefeated as Stevens was picked on the first team by 26 of 28 votes.

Freshman of the Year feels wide open this year, but Ohio State’s DJ Carton received over half the votes for that honor. I went with an off the wall pick.

There are six top-50 freshmen on Big Ten rosters this year — Trayce Jackson-Davis (30), DJ Carton (34), Rocket Watts (39),  EJ Liddell (44), Kofi Cockburn (46) and Alonzo Gaffney (50) — but I’m not convinced that any player in that group has the inside track on a featured role in the way we saw from Romeo Langford or Ignas Brazdeikis last year.

Jackson-Davis will be one of three post players featured in Indiana’s revamped inside-first offense. Carton will share point guard duties with transfer CJ Walker, who started for a Florida State team that made the Elite Eight two years ago. Watts is fighting for minutes in a backcourt that features two seniors. Ohio State’s frontcourt freshmen have to battle for the playing time left over after two Wessons and a host of returning wings.

If junior college transfers were eligible, Nebraska’s Cam Mack would be a prime candidate because the No. 3 ranked JUCO recruit will put up huge numbers in this revamped Cornhusker squad. I looked long and hard at Michigan freshman Franz Wagner given the role that Michigan needs him to play, but in the end, I went off the board with Indiana’s Jerome Hunter.

Hunter took a medical redshirt last year due to a leg issue but has been cleared to play in 2019-20. Health is a significant issue for Hunter, but if he’s full-go, he’s as talented as any newcomer in the conference. Indiana’s roster desperately needs a wing scorer and creator, and Hunter is the best candidate to fill that void.