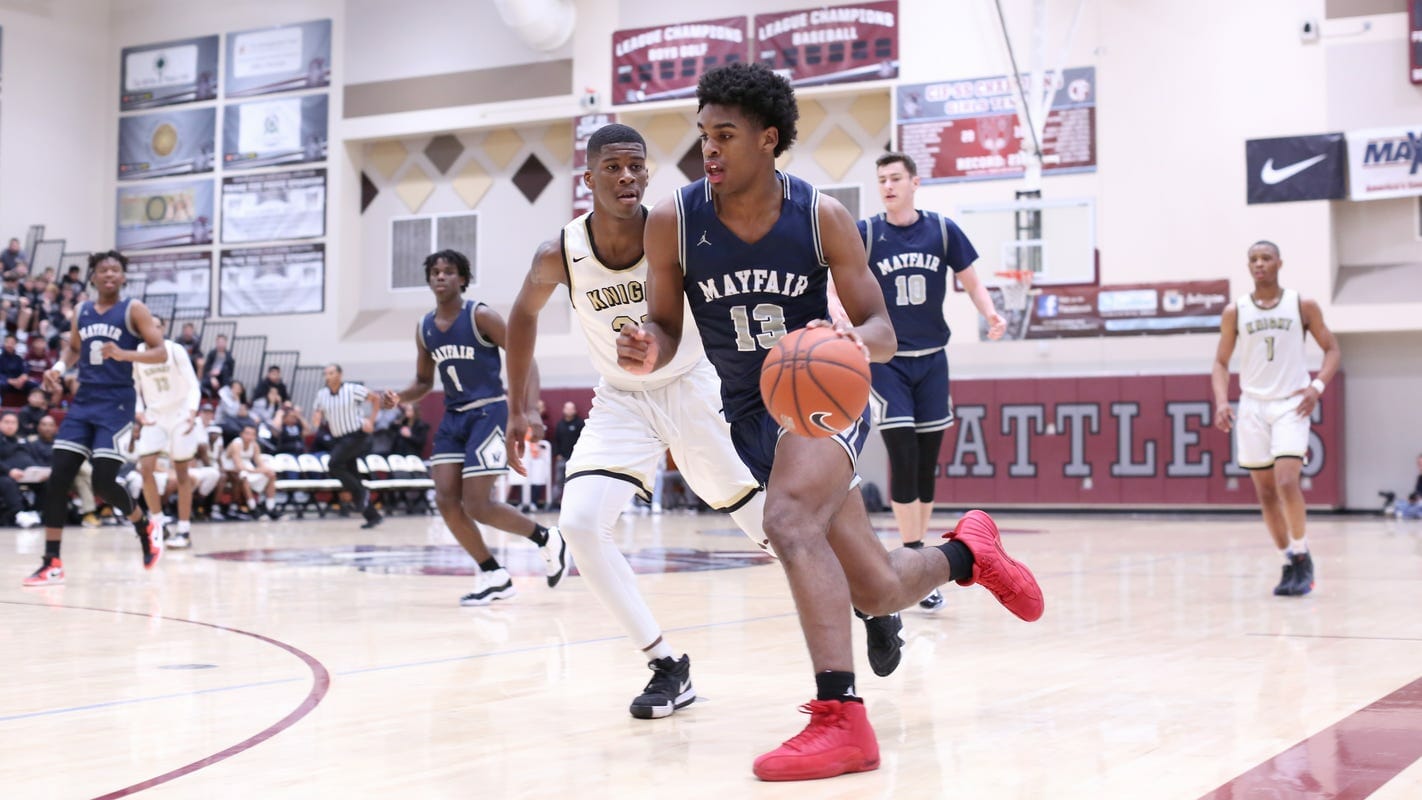 Class of 2020 guard Josh Christopher will announce his college decision today but no time has been confirmed.

Christopher averaged 29.4 points, 11.2 rebounds, 4.4 assists, 3.5 steals and 1.7 blocks this year at Mayfair and was named CIF Division I Player of the Year. He was also selected to the McDonald’s All-American, Jordan Brand Classic and Nike Hoop Summit All-Star events, which were subsequently canceled. On the Nike EYBL circuit, he averaged 21.4 points, 5.2 rebounds and 5.2 assists per game last summer.

Watch our video scouting report for a complete breakdown of Christopher’s game. We broke down hundreds of possessions of Christopher in action this summer to highlight his potential and hone in on areas where his game needs to grow at the next level. 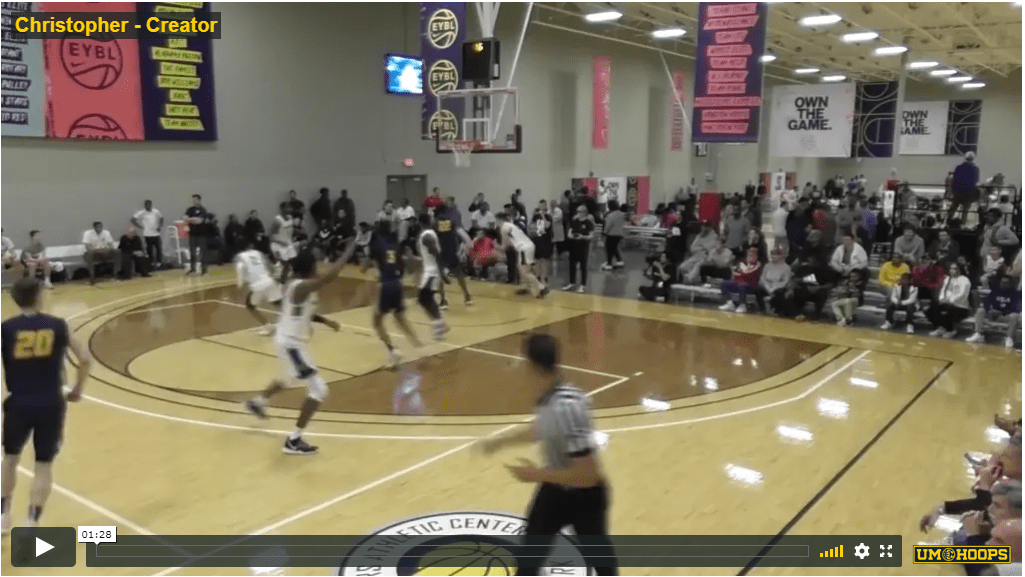 Christopher has been regarded as one of the top recruits in the country for years. He cracked the top 25 nationally in 2017 and rose as high as 6th in the class in early 2019. He had offers from Alabama, Arizona, Arizona State, Arkansas, Cal, Florida, Florida State, Georgetown, Howard, Kansas, Kentucky, Michigan, Missouri, Nevada, Oregon, Texas, UC Santa Barbara, UCLA, UNLV, USC, Vanderbilt and Washington.

He settled on a top five list that included Arizona State, Kentucky, Michigan, Missouri and UCLA. He added Howard to his list after taking an official visit to the school and replaced Kentucky with USC on his final list on March 31st.

Christopher was the first prospect that Juwan Howard offered after he was hired at Michigan. He’s been his priority target since day one and Howard wants him to be the centerpiece of his first recruiting class.

Arizona State has always had an in-road in Christopher’s recruitment because his older brother Caleb is a freshman for the Sun Devils. Arizona State was one of Caleb’s only high-major offers and Josh has been a priority target for quite some time. Christopher took two official visits to Arizona State and also attended numerous games over the past few months to watch his brother play.

Missouri also has a familial connection as Josh’s cousin is a strength coach for the Tigers. Missouri hosted Christopher for his first official visit but has garnered the least buzz in his recruitment.

Christopher will announce on Monday but no one is exactly sure when.

On Arizona State: “I talk to coach [Rashon] Burno all the time. I’m really cool with him, I built a relationship with him. Of course, my brother [Caleb Christopher] being there, that could play a factor in my recruitment, of course. But at the end of the day, that’s my brother’s future. And he did what was best for him going to Arizona State, I gotta do what’s best for me as well. So if Arizona State is the right place for me, or Arizona Tucson is the right place, or wherever, I can go to Alaska and play basketball, I’m going to be the best Josh Christopher I can be.”

On Michigan: “[Juwan Howard] wants me to be the best me that I can be. Of course, he understands that I want to make it to the NBA. He emphasized that he wants me to be in his program and go to the NBA from there. So however long that takes, he said. If I’m there for a year or two years or up to four years, however long I need to prepare myself for the NBA. And just relationship. That was his big thing with me, too.

Laron Christopher on Missouri: “That’s family. My nephew (strength coach Nicodemus Christopher) is down there and we have known Cuonzo (Martin) for a long time now. It has been an ongoing relationship for several years. I think this journey is filled with relationships and our relationship with them is very big and important to us. Our relationship with Missouri is essential. We have a family member on that staff and the value of that is overwhelming to me.”

On UCLA: You know my boy Reef (Shareef O’Neal) is over there. Being a Californian, they’re losing a couple of games, but (Mick) Cronin has a pretty good history. It’s his first year with that team and those aren’t really his recruits. So, I think his players are still trying to get a feel for him. So, I’m just going to trust it.

On Howard: “The main reason is culture. As I get older, I realize how important it is to know who I am, where I come from. I’m a Christopher, but at the end of the day, I come from a background of slavery and hardship through the black community all over. I think it’s important for me to come back and touch back with my roots. I think Howard was the best place for me to do that. Me being a basketball player, and coming here, to potentially bring awareness and consider Howard and put them in my list, along with a bunch of other top-tier schools, I think it was just important for me to do something like this, especially in the time we’re living in now.”

Most national scouts and analysts expect Christopher to pick Michigan. At 247Sports, 11 out of 11 Crystal Ball projections are for Michigan. At Rivals, seven of ten analysts who logged a FutureCast picked Michigan.

· At Michigan: Michigan is in desperate need of a playmaking guard to replace Zavier Simpson, even with the addition of Columbia grad transfer Mike Smith. Christopher would fill that void and allow Michigan to get the most out of its assortment of talented forwards and frontcourt players.

· At Arizona State: The Sun Devils feature a guard-heavy system that would allow Christopher to get out and run. He’d be reunited with his brother and last year’s primary playmaker, Remy Martin, declared for the NBA Draft.

· At Missouri: Cuonzo Martin has only made the NCAA Tournament once in three years and Christopher could elevate next year’s roster. The Tigers bring back a lot of talent but their primary perimeter creator, Xavier Pinson, declared for the NBA Draft and is testing the waters.

· At Howard: Christopher is likely going to be headed to the NBA in one season regardless of where he attends college. Attending Howard would allow him to embrace his culture, be a trendsetter and start something new by attending an HBCU.

Christopher has confirmed that he will announce his decision today but he hasn’t announced a time. The best way to follow his announcement is almost certainly going to be by following him on Twitter and Instagram.

We will update this story when a time has been set for the announcement.