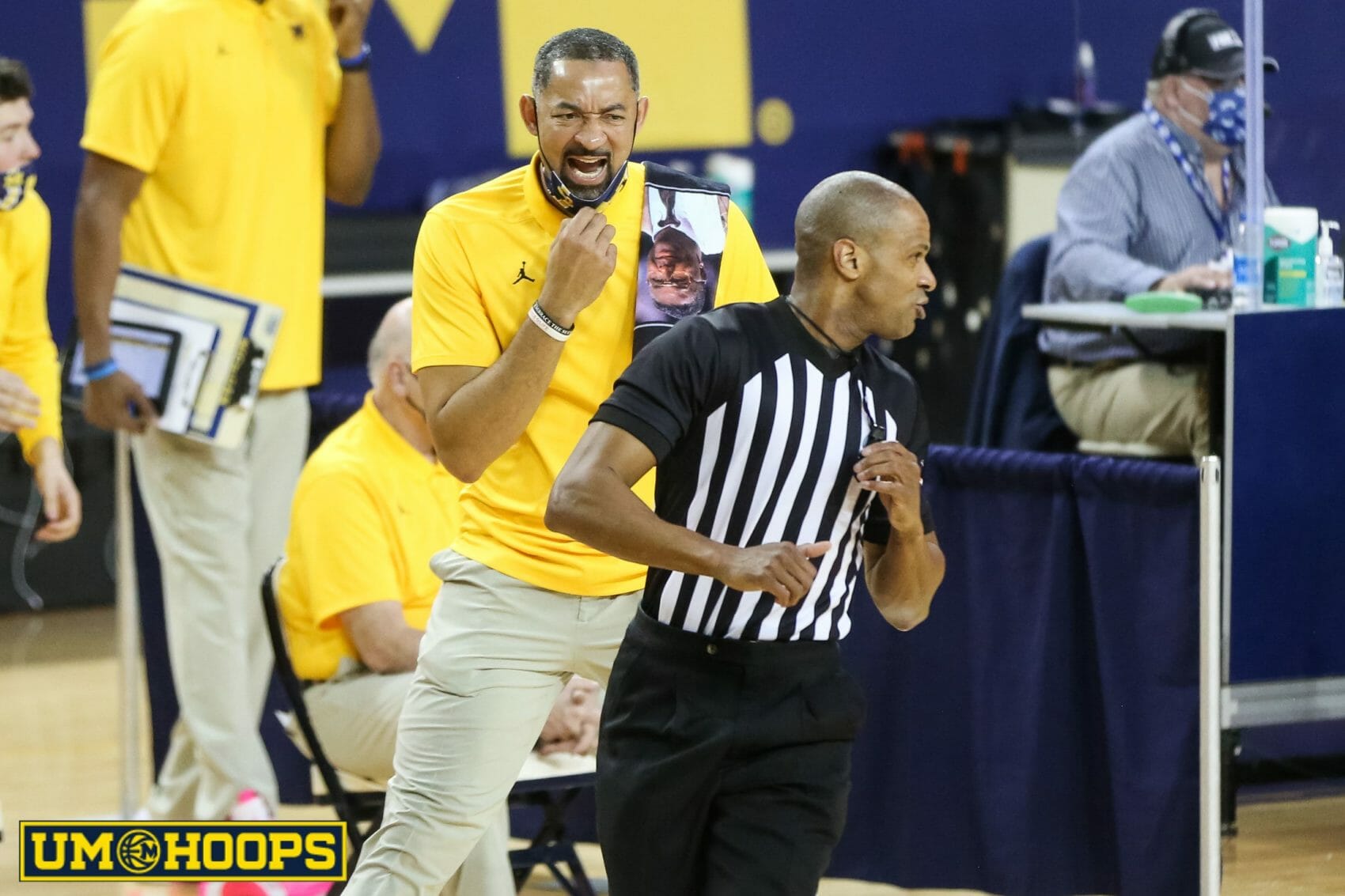 The official unofficial poll of conference media members was released today and Michigan was picked to win the league.

Michigan received a league-leading 13 first-place votes and every member of the panel ranked the Wolverines among their top three teams. The Wolverines actually tied with Purdue for the top spot but were awarded the pick based on a tiebreaker of first-place votes. A full writer-by-writer breakdown of the polling results can be found here.

The “official unofficial” poll exists because the conference’s official media poll doesn’t release a full 1-through-14 ranking of teams.

Hunter Dickinson was selected as an All-Big Ten First Team pick with 25 votes and finished in a tie for fourth in Player of the Year balloting with 3 votes, trailing Kofi Cockburn (11), Jaden Ivey (5) and E.J. Liddell (4). Trayce Jackson-Davis (3) and Trevion Williams (2) also received Player of the Year votes.

The poll was conducted by Brendan Quinn and Adam Jardy and included 28 writers — two per school — who cover teams in the Big Ten.

This exercise makes it much easier to break the league down into tiers based on average rankings:

As a participant in the poll, here’s a rundown and justification of my picks.

Illinois received three first-place votes and the other two were from Illinois beat writers. I’ll be honest, I didn’t expect this pick to be nearly as unique. The panel agrees that Kofi Cockburn is the favorite for Big Ten Player of the Year but picked his team to finish third. Cockburn’s presence means that Illinois will dominate the paint again this season. The return of veterans like Trent Frazier, Jacob Grandison and Da’Monte Williams combined with Andre Curbelo’s potential and some smart transfer additions like Alfonso Plummer and Omar Payne makes me think that this group has enough talent and experience to win the league.

You’ll never hear me say a bad word about Matt Painter but I think he has a really tough task on his hands this year to make this year’s team click. Trevion Williams posted incredible usage and lackluster efficiency last season. Now, Painter has to figure out how to get more out of Zach Edey, who plays the same position, and has discussed potentially playing the two together (a bad idea in my mind). Jaden Ivey provides all of the upside but he looked incredible in Team USA’s uptempo spread attack at the FIBA U19 World Cup, that’s not exactly what Painter prefers to run.

Ivey has a chance to Victor Oladipo the league this season on talent alone, but Painter has a lot to figure out how to get the most out of a group of talented players who aren’t a perfect roster fit.

In April, everyone picked Maryland as a top-five team in the preseason as Mark Turgeon secured transfer commits from Qudus Wahab and Fatts Russell. Now, they don’t even seem to be regarded as a Big Ten contender. I think this roster is closer to the three teams above them than teams like Ohio State and Michigan State picked behind them. Eric Ayala is an excellent Big Ten guard in a league that doesn’t have many proven Big Ten guards. Wahab is a legit post threat, Donta Scott was one of the best breakout sophomores in the league and there’s a chance that Russell looks like a different player in a smaller role.

The Terps clearly have three of the top 25 players in the league, which very few teams can say.

EJ Liddell is an incredible player but this group has major questions about backcourt shot creation. Duane Washington Jr.’s ability to bail out the Buckeyes with big-time plays off the bounce was crucial to this team’s success last year and there’s no obvious replacement who provides that ability. The frontcourt of Kyle Young and EJ Liddell struggled to defend the interior last year — 50.5% 2-point shooting allowed in Big Ten games ranked 11th — and it’s hard to see this team making a major breakthrough defensively.

The Spartans have more than enough good players to compete in the league, but this is the first time in as long as I can remember that they don’t have an obvious candidate for All-Big Ten First Team honors heading into a season. Max Christie needs to be an instant impact scorer — and could be that All-Big Ten guy — but more importantly, Tyson Walker needs to fix the point guard issues that plagued MSU last season.

Steve Pikiell’s program isn’t the most glamorous or exciting but has established a bit of a Big Ten floor. There’s enough back to scrap and claw to somewhere around .500 in the Big Ten thanks to an outstanding defense and an offense that manages to score just enough points at home.

Since he was hired, Mike Woodson has made the right moves, but we still haven’t seen him coach a college game. He can talk about modernizing the offense, but you can only be so modern when your two best players are Trayce Jackson-Davis and Race Thompson, and neither of them takes jump shots. I’m intrigued by some of the additions (Tamar Bates and Parker Stewart in particular) and worried about some others. At the end of the day, there’s enough talent here to make the NCAA Tournament. The issue is that isn’t a new thing; IU had the talent to make the NCAA Tournament over the past few seasons as well but never finished above .500 in the league.

Despite finishing 14th in KenPom last year — in what had to be one of the most miserable top-15 KenPom finishes ever — it feels like things are gradually trending in the wrong direction in Madison under Greg Gard. The Badgers lose many experienced players, but I think there’s still a defensive floor here with Johnny Davis, Tyler Wahl and, yes, Brad Davison. The offensive upside is limited, and we have an early favorite for the least-watchable team in the conference.

Penn State’s 2020-21 season was a disaster, with Pat Chambers resigning in October and a lengthy COVID pause throwing things out of wack. Enter Micah Shrewsberry and a brigade of mid-major transfers. I’m not really sure what this looks like, but Shrewsberry’s pedigree is solid with ties to Matt Painter and Brad Stevens, and he was able to retain Seth Lundy, Myles Dread, John Harrar and Sam Sessoms. This probably isn’t an NCAA Tournament team but there are enough intriguing pieces that I am curious to watch the Nittany Lions this year.

Maybe the defense gets better with Luka Garza’s departure but it is hard to imagine building a great defense with post-hip surgery super senior Jordan Bohannon in the backcourt. Keegan Murray is a future lottery pick but I’m not sure his game fits the mold of a player who can carry a team without much else.

I desperately want to believe in Fred Hoiberg’s project in Lincoln. It would be tremendous for the league if Nebraska could transform into an offense-first program that Iowa State was under Hoiberg. There’s more talent on the roster than ever and the backcourt trio of Alonzo Verge Jr., Trey McGowens and Bryce McGowens is as good as Hoiberg has had at Nebraska. Still, there are too many red lines on the KenPom profile over the last two years to ignore until we see a positive product on the floor.

Northwestern has lost double-digit games in a row for three consecutive seasons. The year before that streak began, the Wildcats lost their final seven games of the season. Since the 2017 NCAA Tournament appearance, Northwestern hasn’t finished better than 74th nationally in KenPom.

Player of the Year: Kofi Cockburn

I picked Illinois to win the league and Cockburn is the most physically dominant player in the league. If Illinois wins the league, I’d be surprised if Cockburn isn’t the Big Ten Player of the Year.

Freshman of the Year: Caleb Houstan

Not only does Houstan have an impressive pedigree from playing at Montverde and with Team Canada, but he steps into a perfect situation where the Wolverines need a ready-to-play wing who can make three-point shots.

This was the same as our Big Ten Top 25 list and we also discussed it at length on a podcast.