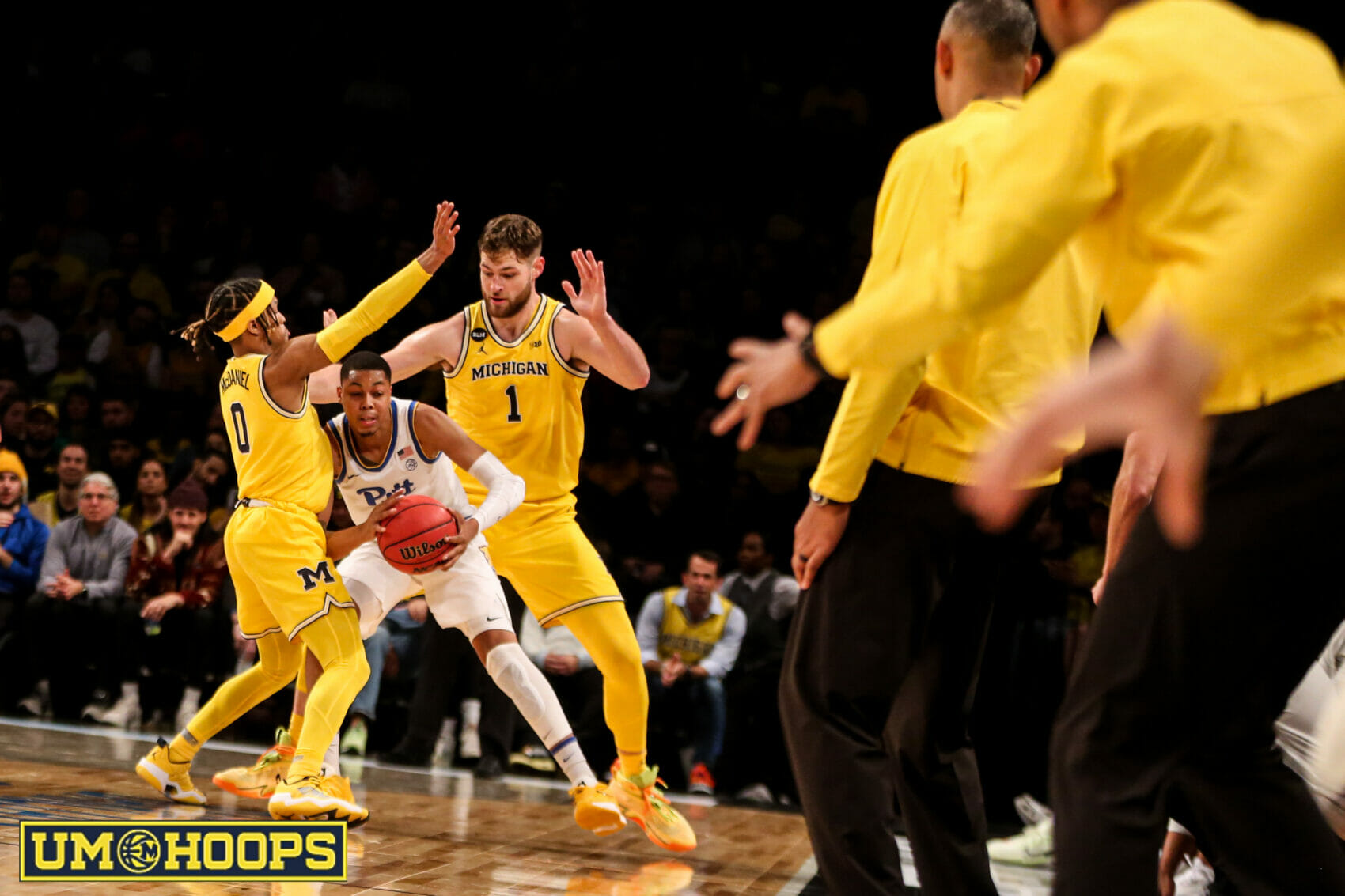 Against a Pittsburgh team that struggled on defense, Michigan found momentum after a slow first half, eventually steamrolling the Panthers, 91-60, to open the Legends Classic. The Wolverines will face Arizona State Thursday night (9:00 p.m.) after the Sun Devils knocked off VCU, 63-59.

On a night where the offense found it highest level of the season and the defense stood up to Pitt’s tests, the Wolverines won against little resistance down the stretch. But that doesn’t mean tonight’s game was any less impactful for the Wolverines.

Here are five takeaways from the blowout, including Dug McDaniel’s arrival, Joey Baker’s shooting, and clean execution by the starting five.

1. Dug McDaniel shows off his talent

Coaches were high on freshman guard McDaniel’s abilities in preseason media availabilities, and he seemed poised to come out swinging to start the season. McDaniel himself even noted that there’s a chip on his shoulder to prove himself. But in his first two games, he had just two points, scoring off a flashy coast-to-coast layup in the season opener but not doing much else.

Against the Panthers, McDaniel threw off that cold start in emphatic fashion.

Dropping an eight-point, eight-assist performance off the bench, McDaniel showed just how much his flash can add to the Michigan offense. With his quick — at times erratic — style of play, he dominated the second half as a critical playmaker to put the game to bed.

“Having the vets on the team teaching me through the ways, stuff like that, just practicing with them everyday, learning their spots, where they like to catch the ball best is definitely helping my game out a lot,” McDaniel said. “As I keep playing games, the games tend to slow down, I tend to get more mature and just get more used to the atmosphere.”

And that maturity matters. While Jaelin Llewellyn has locked down the ‘1’ to start the season, McDaniel possesses offensive weapons that the grad transfer guard just doesn’t have in his arsenal. But that’s not a bad thing for either player.

“(Dug) and Jaelin challenge one another, Jaelin does a good job of showing leadership and helping Dug along the way,” Michigan coach Juwan Howard said. “Once Jaelin leaves — whenever he leaves — he’s passing the torch on to a young man that’s gonna be ready to roll. Tonight, Dug is just scratching the surface. There’s a lot more in him.”

It’s not that one is clearly better than the other right now, but rather they play drastically different games. McDaniel is a young offensive catalyst; Llewellyn is a poised veteran game manager. It’s almost certain that Llewellyn keeps starting games — Juwan Howard doesn’t make roster decisions off one performance. However, McDaniel’s explosive performance reinforced the trust his coaches already had in him, and it’s likely he finds more time on the floor.

So far this season, grad transfer guard Joey Baker has been Michigan’s go-to sixth man. His efficiency from deep provides an instant spark, and he commands plenty of attention from opposing defenses. That much proved true against the Panthers, as he went 4-for-5 from three, taking advantage when teams abandoned the perimeter to cover junior center Hunter Dickinson.

“(Dickinson) is obviously a really good post player and attracts so much attention,” Baker said. “For myself and other guys, it makes our job easy. Once that double comes, we (are) shot-ready, and we have unselfish guys on the team so we’re gonna find the open ball.”

Much like his assessment of how Dickinson facilitates his own game, Baker stays humble in his role. He isn’t flashy about letting threes rain; rather he finds open space and takes his shot, getting open immediately after in case his team regains possession on a miss.

Combined with freshman guard Jett Howard (more on him later), that three-point game makes all the difference. Instead of the Hunter Dickinson Show every night, Baker adds another wrinkle on offense that rounds out the floor.

“I think it comes down to the guys that were making plays,” Baker said about his success from deep. “I know Dug had a lot of assists, Kobe (Bufkin) was moving the ball. Like I said earlier, we have really unselfish guys, so just trusting my role and trusting the offense … and that guys are gonna make the right play — that’s all that was.”

That success is emblematic of a key strength in this iteration of Michigan’s roster. Last season, shooting relied on Caleb Houstan to shoulder much of the three-point load. When he was hot, the offense feasted. When he went 2-for-7, it starved.

But with Baker and Jett divvying up that workload, it helps spread out the responsibility. On a night when Jett drew help defense from the Panthers and had to drive to the hoop to make his plays, Baker provided another deep threat that Pitt couldn’t stifle. That collaborative role made a 91-point night at the office an easy feat for the offense, and it’s something to watch out for moving forward.

It sounds obvious, even oversimplified, to say that the last thing an offense wants is turnovers. Whereas a bricked three or missed layup might cause a change in possession, they at least represent some effort to get on the scoreboard. Turnovers give the ball up for free.

Against Pitt, Michigan’s starting five didn’t make a single turnover. According to the Wolverines, that all goes back to their preparation.

“When we practice, coach reads off the turnovers — we gotta face the consequences for turnovers,” McDaniel said. “So if we ain’t gonna do it in practice, you hold us accountable in practice, the game’s different. … As you can see, it shows on the court.”

With just one turnover as a team until bench players checked in late in the second half, Michigan thrived protecting the ball. Its starters’ clean performances set a tone for the night, maximizing offensive chances by doing just that: making them chances in the first place. No free stops were given by costly passes, and the whole unit ran like a machine in the offensive end.

Was that onus more on a weak Pitt defense than the offense’s own strengths? Maybe. It certainly seemed like anyone with hands could get a shot off. But nevertheless, the starters didn’t waste their own opportunities and put the ball toward the hoop, and more importantly, they didn’t give any of those chances away for free.

On an offense with elite weapons like Dickinson and Jett Howard, it’s easy for one man to shoulder the offensive load. But for an offense that racked up 91 points, there was plenty of scoring to go around without them. So much so, that four players left with double-digit scoring.

“I think the fact that a lot of guys were in double figures speaks to the unselfishness again,” Baker reiterated. “I keep going back to it but everyone’s making the right basketball play and that spreads the wealth around.”

In a second half that saw those two sit out — Jett for aforementioned foul trouble, Dickinson because he simply wasn’t needed — multiple shooters got involved on the offensive side. Twenty-five of their 53 points came off the bench, highlighted by Baker and McDaniel, but complemented by deep bench players like Isaiah Barnes — who went 3-for-4 from the charity stripe — and Tarris Reed Jr., who added a dunk and an offensive rebound.

Non-conference blowouts are all about giving the roster opportunities to learn and grow. They’re the perfect time for the Wolverines to air out the bench and give younger players minutes.

“Our guys did an amazing job of being dialed into the game plan and then going out there and executing with the toughness (of Pitt) and also being locked in,” Juwan Howard said. “Most importantly just sharing the game.”

That’s a luxury not afforded in past seasons, including last season when starters had to play deep into games. How they reap the benefits remains to be seen, but it’s surely a welcome sight for the coaching staff.

On a night when the offense flowed like lava, freshman wing Jett Howard put up a 17-point stat line off 6-for-8 shooting. That’s even more impressive considering he did that spending the second half on the bench, in foul purgatory.

With a volatile start to the second half, Jett took his second, third and fourth fouls in just a two-minute span. He sat out until there was just 6:37 left on the clock then quickly took his fifth and final foul a minute later. Somehow — amid all that chaos — he found a way to pick up seven points on perfect shooting.

But that foul trouble raises concerns, even if it’s so early in the season. He picked up a pair of fouls against Purdue Fort Wayne and a trio against Eastern Michigan, showing that he’s still getting used to the boundaries of the college game. And trying to fit in on the defensive end of the floor.

It’s a transition every freshman has to make. Even though he’s poised to be a key cog in the offense — his 17-point night just a taste of his overall impact — he can’t do any of that if he’s parked on a folding chair.