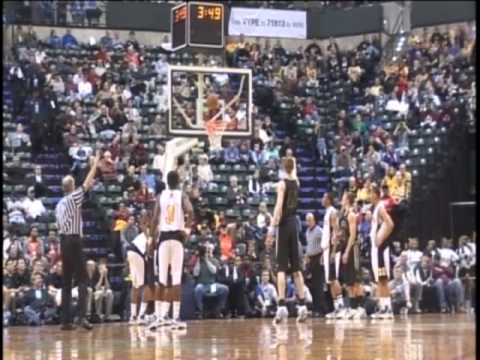 A Guest Post by Josh Houchin from the IHSAA State Finals

Zeller’s coach told him that rebounding would be a huge to key to beating Lew Wallace, and he definitely took it to heart. He finished with 20 points and 26(!) rebounds. He battled tough on the inside, grabbing nearly everything within his reach. He also blocked a couple of shots, while altering several others.

Zeller was actually one of two players in the frontcourt bring the ball up against the Wallace press in the first half. He turned it over a couple of times in the first quarter in this role, but overall, I thought his ball handling was solid for a guy that’s 6’10+. Wallace was very physical with him, but he rose to the occasion and helped lead his team to a state title as a junior (something neither of his brothers were able to accomplish.)

Ferrell didn’t have the best day shooting the ball, but there’s a lot to like about this sophomore. He can handle equally well with both hands (a rarity nowadays), and he’s incredibly quick. He’s also a very good rebounder for his size, and can jump really well.

I think the most telling number about his performance in this game was an unofficial stat that I kept. He had 7 WBA (would-be-assists). He found the open guy time and again, and his teammates just couldn’t deliver. After Wheeler saw this in the first half, they made a change and sent a double team at Yogi nearly every time he touched the ball. This team really wouldn’t be anywhere if it wasn’t this kid, and the fact that he even got them to this point at such a young age is a tribute to his ability. He’s probably going to end up having offers from pretty much everyone in the country by the time it’s all said and done. If he grows a couple of inches, look out.