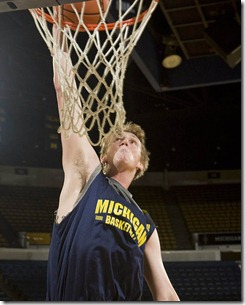 He could be Michigan’s starting center, yet most haven’t seen him play but a few minutes of an exhibition game. Who is Blake McLimans and what will he bring to the table? At this point, all we can do is try to piece together a guess.

Despite his freshman eligibility, Blake is actually older than junior Zack Novak and the third oldest player on the roster (behind Bartelstein and Douglass). Thanks to a 5th year of prep school and a redshirt, Blake is a rare 20 year old freshman. Obviously age doesn’t necessarily translate into production but it certainly makes Blake unique.

When trying to figure out Blake McLimans’ game, the first thing that stands out is his size. He’s easily the tallest player on Michigan’s roster at every bit of his listed 6-foot-10. He was tall before but now he’s put on the muscle, having gained 30 pounds since he arrived on campus – he’s not Jared Sullinger but he looks the part of a guy that can survive as a division 1 big man.


Reasons to be Excited

At this point it appears that Michigan’s “three headed center” is largely going to be based on the flavor of the day. McLimans, Morgan, and Horford all bring something unique to the table but are all so young that they will have their individual ups and downs. Ideally, Beilein will be able to use them in small enough doses to mask their weaknesses and maximize the benefits they bring to the table. You have three players for the five position which means all three will average a maximum of around 20 minutes per contest (depending on whether Horford ends up redshirting).  I think Blake may start, mostly because he has the best chance of winning the jump ball, but the true test will be who closes games.

At the end of the day, Blake’s success will come down to his shooting – most importantly his three point shooting. He’ll probably fire up over 60 or 70 threes this year and if he can connect on 35% of those shots, he’ll be in good shape. Having a five man that can hit the three stretches the defense and allows Beilein’s offense to run more efficiently.