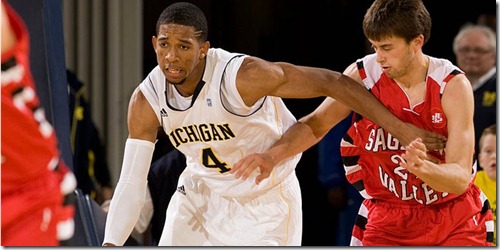 The names and faces were different but the shooting numbers were eerily familiar. After hitting their first two three pointers, Michigan proceeded to make just one of their final 19 attempts. Luckily it was an exhibition game and Michigan’s woeful shooting totals will be wiped clean before their season opener on the 13th.

The Wolverines got out of the gates quickly, jumping out to a big lead behind their starters: Darius Morris, Zack Novak, Tim Hardaway Jr., Evan Smotrycz, and Jordan Morgan. Once Michigan had opened it up, Beilein experimented with a number of lineups and Saginaw Valley crept back into the game. Michigan’s lead ballooned as high as 20 points (twice) but Saginaw Valley also cut the Michigan lead to single digits on multiple occasions.

Michigan also controlled the defensive glass, rebounding 75% of SVSU’s missed shots. Jordan Morgan led the team in rebounding, pulling down 15 boards (10 def, 5 off) in just 20 minutes. Saginaw Valley was undersized up front, but Morgan and Smotrycz’s play on the glass was encouraging.

It’s become so routine that it’s almost expected, but Michigan only turned the ball over on 8% of their possessions. Beilein’s teams have always done a good job taking care of the ball but this is still noteworthy when six of the ten players in the rotation have never played a college game.

Saginaw Valley didn’t play particularly well offensively but that doesn’t mean that Michigan’s defense didn’t raise any concerns. No team is perfect defensively from in November and Michigan’s youthful squad is no exception. There were a few too many late rotations and missed shifts but those will undoubtedly be worked out in time. My main worry is how much trouble Michigan had with SVSU guard Greg Foster on the perimeter. Foster was quick, but there are going to be quicker guards to defend as the year goes on.

Exhibitions are exhibitions. They are a chance to get some film, a bit of experience, and move on. Jumping to conclusions based on an exhibition game is a terrible idea, but there is still room for individual evaluation. Player bullets for all 10 Wolverines that checked into the game are after the jump.