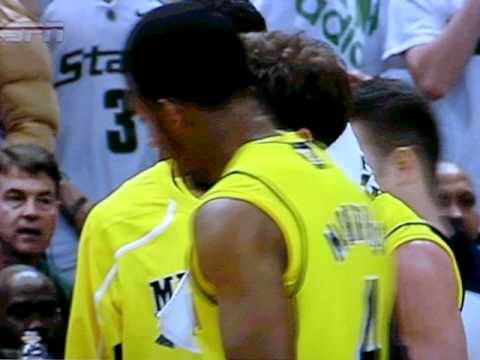 Kudos to our resident video guru, Josh Houchin, who did an amazing job with these videos. We’ll have more videos in the coming days and weeks.

There are plenty of players that talk about how badly they want to win games but a much smaller group consistently demonstrates their will to win on the court. Zack Novak falls into the second category. He says things like “I hate losing more than I like winning” because he’s brutally honest and not because it makes for a good sound bite. Anyone that has seen him in the locker room after a loss understands his honesty.

Novak posted career bests in almost every statistical measure during his junior season including points, rebounds, three point shooting, effective field goal percentage, offensive rating, free throw percentage, free throw rate and turnover rate. His improvement wasn’t as dramatic as Darius Morris or Jordan Morgan but, quietly, Novak turned himself into a better player during the offseason. More importantly, he took ownership of the team and provided the direction and leadership that was so sorely lacking a year before.

Shining Moment: 19 points on 6 of 9 (6-8 3pt) shooting with six rebounds and two assists at Michigan State. It wasn’t just the desperate nature of the game, the fact that it broke a lengthy drought versus an in-state rival, or Novak’s sideline freak-out during the first half. It was also Novak’s best game of the season. Video.

At this point Novak is what he is. There are clear limitations to his game but he is the heart and soul of this team. He’s improved steadily over the course of his career and while he’s not going to transform into a 15 point scorer during his senior year, he should flirt with 10 points per game during his senior season.

Novak’s three point shooting will continue to be the most important aspect of his game. He made 42% of his threes in Big Ten games and that demands more defensive attention on the wing, opening up the rest of hte offense. 2012 has to be the season where Novak goes from “good” shooter, 34.6% for his career, to “great” shooter and break the 40% plateau consistently for the entire season.

The more interesting storyline will be if there are any changes to Novak’s role. I don’t expect him to play the 35 minutes per game that he averaged this season (top ten in the conference) but he will still play major minutes. The question is where. He can play the two or the four but he really isn’t a perfect fit for either position. The flexibility means that Novak’s role will depend on the pieces around him. If Evan Smotrycz makes a big leap you might see Novak play more minutes at the two. If Stu Douglass, Carlton Brundidge, or Trey Burke are producing you will probably see Novak at the four. Michigan will also be able to juggle lineups a bit more to force mismatches depending on the opponent.

Zack Novak meant far more to this team than the nine points and six rebounds per game that show up in the statsheet. Taking charges, winning 50-50 balls and grabbing tough rebounds are all staples of Novak’s game which don’t show up in the box score but can provide infectious spurts of energy that help define the entire team. The leadership factor is nearly impossible to quantify but is also the difference between winning and losing games.