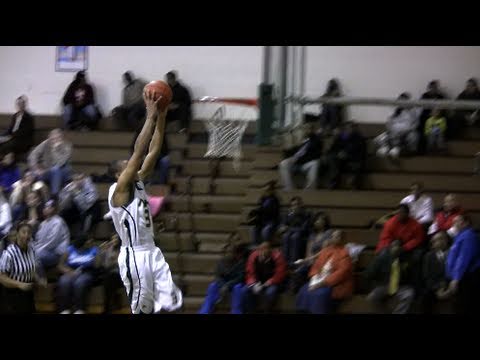 Trey Burke’s prep career has been defined by winning. You can count the number of losses that Burke’s Northland squad suffered during his tenure on one hand. Playing for one of the midwest’s top AAU programs, All-Ohio Red, Burke added an AAU national championship to his resume as well. Despite all of his team success, it wasn’t until his senior year that Burke began to start collecting individual accolades.

Burke’s recruitment was anything but simple, as he took a long and winding path to Ann Arbor. He verballed to Penn State during the fall before his junior season. Gaining exposure while playing alongside super-recruit, and good friend, Jared Sullinger, Burke had picked up a handful of mid-major offers at that point. He hadn’t received the illustrious home town offer from Ohio State and opted to jump at the opportunity to play in the Big Ten, following in the footsteps of Columbus native Jamelle Cornley.

Seven months later Burke rescinded his commitment and was back on the market heading into his final AAU season. Schools like Cincinnati, Iowa, Nebraska and Butler moved into the picture and many had Burke penciled into Cincinnati’s recruiting class – he would later mention that they were his leader for five months. Michigan jumped into Burke’s recruitment during the July recruiting period, undoubtedly taking notice after watching him go head-to-head versus one of his AAU rivals, U-M commitment Carlton Brundidge. Just over a month later, Burke was a Wolverine.

After signing a letter of intent a couple of months later, Burke would go on to dominate the Ohio high school basketball scene during his senior season. No longer trapped in the shadows of Jared Sullinger, he led Northland to the state finals, averaged 24 points and seven assists per game and won Mr. Basketball.

Burke is a scoring point guard. That’s not to say he’s a shooting guard that plays point guard, he’s a point guard that can score. Burke is an extremely accurate three point shooter (47% on 116 attempts as a senior) with significant range. He has a great handle, is comfortable driving with the right and left hand and also possesses a nice pull up jump shot. His size and lack of elite athleticism are his primary weaknesses, somewhat inhibiting him when finishing around the hoop and also on the defensive end.

I saw Trey play several games during his senior Mr. Basketball campaign, and many others on video, but it was his performance versus Lakewood St. Edward that stood out. This was one of only two games that Northland lost all season but it defined Burke as a player. He scored 35 points on 14 of 21 (7-12) and did everything within his power to keep Northland alive in the game. He put on a three point shooting clinic in that game but what was most impressive was his clutch leadership. He lived to take the big shots and made more than he missed. Video:

Don’t just take my word for it, national pundits agree:

Burke is a lead guard that can easily slide to the shooting guard position because of his ability to score. Burke is terrific at hitting pull up jumpers after one or two rhythm dribbles or off the catch with smooth and confident stroke. Burke can knock down open threes off the catch or dribble without hesitation as well. He does a good job of running offense and can drive draw and kick to open teammates due to defenders knowing he is a scoring threat that is capable of big numbers. At times Burke will not be as aggressive as he should be which takes away from his production being as consistent. Burke must also add strength be a better defensive rebounder and continue to hone his point guard skills.

Burke continued his strong summer with a very impressive scoring display. Though he is a point guard, Burke has the natural instinct and ability to score, and when he gets into a rhythm he can be lethal from three. With All-Ohio in the lead, Burke really got it going for himself and others, and was the catalyst in blowing it wide open for them. … Burke had it working from deep knocking down several three pointers, and then when the defense closed out on him out of control he went around them and made a drive for a bucket. Burke finished with over 20 points, and was the biggest reason why All-Ohio cruised to an easy win.

We have almost endless amounts of Burke video, which you can mostly find on his recruiting profile page. Here are a few notable clips:
Senior:

Trey Burke is not Darius Morris. They play the same position, and No. 3 will be expected by many to replace No. 4’s production, but their games are vastly different. Morris uses his size and strength, perhaps Burke’s greatest weaknesses, to bully smaller defenders. On the other hand, Burke’s game builds off of his jump shot, deadly from midrange to well beyond the three point line, and quickness with the ball in his hands. Both have their strengths and weaknesses, and there’s no way that Burke matches Morris’s production a year ago, but Burke should have every opportunity to earn the starting point guard spot on next year’s team.

Beilein’s “two guard” offense was originally designed to minimize the need for a point guard, but last season demonstrated just what a luxury it is to have a true point guard and distributor. Of the scholarship players on next year’s roster, Burke is the only one that has played on the ball for his entire career. This is the primary reason why Burke will receive every opportunity to earn the starting point guard role on next year’s team. Beilein also hasn’t shown aversion toward starting true freshmen, Darius Morris started 19 games as a freshman, Evan Smotrycz started 24 and Tim Hardaway Jr. started 35.

True freshmen point guards struggle in college basketball but Burke playing meaningful and efficient minutes at the point guard is the best case scenario for next year’s team. It will be interesting how Burke’s attitude and mindset transitions to the next level. He’s a fiery competitor that plays the game with a certain swagger about him. He’s a fighter and will set foot in Ann Arbor expecting to earn a spot, not being handed anything. His workout videos should make that much clear.

That’s not to say there aren’t questions that need to be answered about his game. How effectively can Burke run the pick-and-roll? Will he get Michigan’s shooters the ball in the right spots? How will his size affect his ability to score in the lane, or defend other guards? Morris made others around him better, picking up double digit assists like it was nothing, and Burke has yet to demonstrate that he can be that sort of creator for others. He’s not a bad passer by any means but he’s attempting to replace arguably the best setup man in Division-I basketball.

Looking at next year’s roster, it’s clear that Burke is the most important incoming freshman. Opportunity is the most important factor toward a successful freshman campaign and, with Darius Morris in the NBA draft, Burke will have every chance that he could ask for. Now it’s time to see what he can make of it.