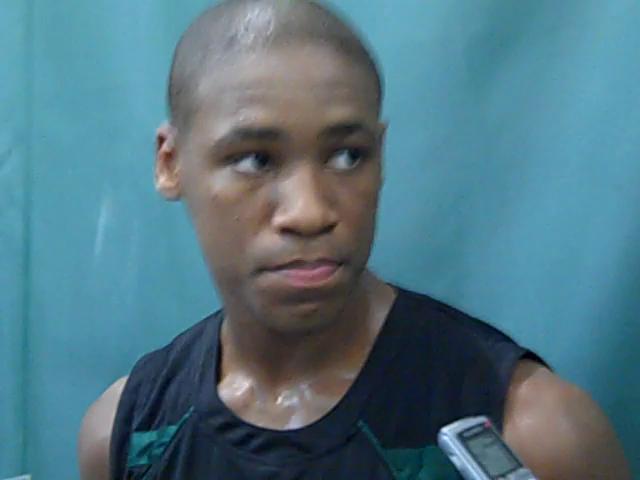 Demetrius Jackson picked up a Michigan offer on his recent unofficial visit to Michigan and has emphasized that the Wolverines are near the top of his list. The 6-foot guard also has a Xavier offer along with strong interest from Notre Dame, Indiana, Michigan State, Illinois and others. Jackson took the time to discuss his recruitment after playing his first game in front of college coaches this July.

We’ll have more updates – scouting, interviews and highlights – from the Adidas Invitational in the coming hours and days. For now, you can view a full transcript of the interview after the jump.

Talk about the end of the game when you had a chance to tie the game at the line.
I know I missed a free throw and everything like that but we kind of blew the game early – making turnovers, making mistakes – just not playing how we usually play. We haven’t played together for a while because we were playing with our high school teams but still that’s no excuse because we have to be competitive and play hard. We have to just learn from our mistakes in the next game and go hard.

You guys kind of struggled finishing, how frustrating is that to you?
It gets frustrating after a while but you never want to put your teammates down. Pat ‘em on the butt and tell them they’ll finish next time, be strong with the ball and play hard.

Can you talk about how your recruitment has picked up?
Yes sir, I picked up Xavier and Michigan offers.

Are a lot of other schools starting to come into the picture for you?
Yes sir. A lot of schools have made contact and everything. I’m developing better relationships with the coaching staffs of each school that I’ve made contact with and it’s going good, great and I’m just thankful for all the schools that are recruiting me. I’m blessed.

How much have you been talking to Indiana?
I actually just took a visit there not too long ago. We all sat down to talk about how they need a point guard in 2013 and to keep it up and keep working as a player.

Do you think they are going to offer you?
You know, I could care less about that right now. I just want to develop as a player, I want force it and I’ll just let that stuff come – come out and compete and play hard.

What schools have you visited?
Xavier team camp, Michigan State, Michigan Elite Camp and also a visit there and Indiana.

How would you compare those schools?
They are all great places and I’m thankful for all of them. Right now it seems like I have some relationships that are better than others. Some schools I’m just getting to know but they’re all pretty good.

Do you notice what coaches are here watching you?
I notice them but you can’t let that bother you, so I just play hard.

What did you like about the Michigan visit?
The whole thing was great. They treated me and my whole family really well and it was just all great overall.

Are coaches telling you they want to see you play in July and assess after that point?
Yes sir.

Where do you think you’ve come as a point guard and where do you want to get to?
I want to be the best so you work hard every day in the gym. Some things come naturally and some things you have to work on. Me personally I work on everything to just keep developing. I want to better my jump shot a lot so I’ve been working on that a little harder than other things.

Our friends at Inside the Hall posted a handful of notes – including several on Michigan targets – from the first day of action in Indianapolis.