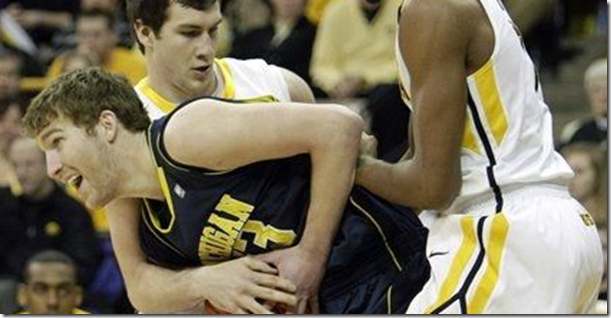 Earlier in the week, Michigan beat Northwestern in spite of a horrendous shooting performance because it controlled the offensive glass, didn’t turn the ball over and made free throws. The Wolverines still shot the ball poorly – 46% effective field goal percentage – in Iowa City but failed to make a difference in any of those other areas of the game. Michigan turned the ball over on a quarter of its first half possessions (16% TO Rate for the game), was a non-factor on the offensive glass and made just 11-of-17 free throw attempts. The Wolverines attempted 60% of their field goals from three point range but connected on just 8-of-31 triples.

This wasn’t a game where Michigan’s offense was running smoothly and missing open chances, it was very much the opposite. Everything about the Wolverine offense looked forced and simple passes were an adventure. The turnovers were painful in the first half and Michigan just couldn’t seem to be able to string possessions together without bad field goal attempts mixed in. Sitting Burke in the first half certainly hurt but Michigan’s offense didn’t look all that great with Burke in the lineup either. Iowa threw various defenses – three quarter court traps, zones and basic man-to-man – at Michigan and the Wolverines were unable to find a flow, instead settling for ill advised jumpshots.

Michigan was a minute away from surviving the first half with Trey Burke for 13 minutes only down five points. Iowa closed the half on a 5-0 run, certainly a Key Play, and Michigan was never able to recover. The two fouls and sit debate is a debate worthy of its own post but Burke didn’t pick up his third foul until very late in the game, is called for 1.8 fouls per 40 minutes (6th best in the Big Ten), has twice as many games with no fouls (6) than four fouls (3) and has never fouled out in his career. I don’t think the decision cost Michigan the game by any stretch but I’d like to see John Beilein take a little more risks with foul trouble considering the lack of depth on this roster.

Compounding Michigan’s offensive problems was what was arguably the Wolverines’ worst defensive performance of the season, given the competition. Iowa scored 1.21 points per possession, more than Michigan has surrendered this season against any team other than Duke. This was a good but not an extraordinary shooting performance from the Hawkeyes, who made 48% of their twos and 42% of their threes for a 51% effective field goal percentage. Iowa was solid in each of the other three factors as well. The Hawkeyes got to the line, attempting 28 free throws, didn’t turn the ball over and were effective on the offensive glass, grabbing 36% of their missed shots.

Matt Gatens, 4-of-7 on threes, had all but one of Iowa’s made three point shots but Iowa’s wings and bigs were effective around the basket. Zach McCabe (4-of-5 on twos), Devyn Marble (5-of-11 on twos), and Melsahn Basabe (3-of-5 on twos) all killed Michigan inside.

It sounds cliché to say that Michigan looked flat but, simply put, Michigan looked flat. Iowa beat the Wolverines to numerous fifty-fifty balls, won the battles on the offensive glass and just seemed to play with more purpose. Every Michigan run or spurt was answered by big basket, steal or offensive rebound by the Hawkeyes.

The loss is disheartening but there are still 13 regular season games left to be played. Every Big Ten game is difficult – Ohio State, Michigan State, Indiana and Purdue all lost this week – and success in the league is as much about responding to adversity as anything else. Michigan’s back is against the wall headed into a Tuesday night showdown with Michigan State (who also lost on the road at Northwestern today) as it enters the most difficult stretch of schedule of the season. It’s worth noting that this team has responded well after losses (beating UCLA, Iowa State and Wisconsin) but Tuesday’s game could be a defining moment of the season.