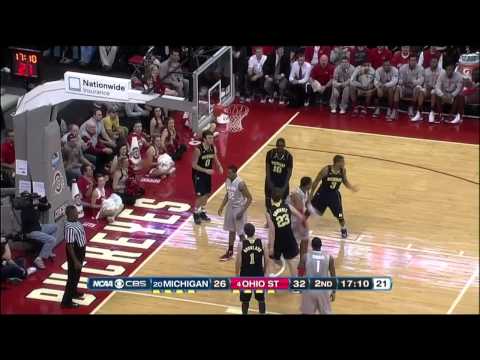 In the days leading up to Michigan’s matchup against Ohio State, most of the talk centered around how the Wolverines were going to stop big man Jared Sullinger, or perhaps William Buford and Deshaun Thomas. The Wolverines were effective in limiting Sullinger’s production, defending Ohio State’s three point shooting  but it was the fifth Buckeye starter, Lenzelle Smith Jr., that grabbed eight offensive rebounds en route to 17 points – with 11 off of putbacks. Granted, a few of the rebounds fell into his lap as Michigan double-teamed Sullinger, leaving the weak-side rebounder nearly wide open. Because of the Buckeyes’ size advantage, the Wolverines were forced to pick their poison—take your chances guarding Sullinger one-on-one or make somebody else beat you. Michigan chose the latter, and that somebody else turned out to be Smith. Ohio State had 14 offensive rebounds for the game, grabbing over 40% of its missed shots, and Smith, who averages just four rebounds per game, was the most productive Buckeye on Sunday.

For a good portion of the second half, this was a ball game. Michigan was down just one several minutes into the half and appeared to show the resilience necessary to hang in the game for the full 40 minutes. Then Ohio State went on a 14-2 run to turn a one-point game into a comfortable 13-point lead in less than five minutes of clock time. The Wolverines didn’t do themselves any favors by making a couple of careless plays that fueled the run. With Ohio State up just five, Trey Burke drove baseline and committed a cardinal sin of basketball, leaving his feet with no idea of what to do next. Burke tried to pass the ball back to the top of the key to Hardaway, but William Buford read him perfectly. Buford made the easy steal, and from there the only question was what type of dunk he would do on the other end. He finished with a one-handed slam, bringing the Ohio State crowd to its feet and forcing John Beilein to call a timeout to try to tame the Buckeye run. Following the timeout, Jordan Morgan missed a layup and Sullinger grabbed the board. On the other end, Aaron Craft drove past Burke off a screen from Sullinger. Morgan tried to pick Craft up in the lane but was well out of position. Craft layed in the nice left-handed layup and drew the soft foul on Morgan, who never had a chance of stopping Craft because he was so far out of position. The foul was Morgan’s fourth, sending him to the bench along with Michigan’s dwindling chances of a comeback as Ohio State now led 42-33 and had gained all the momentum. Missed layups, careless turnovers and defensive breakdowns are a bad sign at home but they are crippling on the road where every possession has even more importance.

With Morgan, Smotrycz and Novak all on the bench in foul trouble midway through the second half, Colton Christian, Blake McLimans and Matt Vogrich were called upon to provide a spark off the bench. Defensively, they did a superb job, playing a huge role in holding the Buckeyes scoreless over more than a five-minute span. It was much like the Arkansas game last week, where Michigan held the Razorbacks scoreless for five minutes in the second half but failed to convert offensively. Much like the Arkansas game, the Wolverines failed to really make anything happen on the offensive end despite strong defensive play. During this stretch, Douglass missed a layup and then committed a turnover, as he ran out of room and the baseline and his pass sailed out of bounds. Christian tried to get into the action offensively, but couldn’t convert on two layup opportunities. Hardaway, probably feeling the pressure to take over with three of his fellow starters on the bench, launched a deep, contested three that clanged off the backboard and into the hands of the Buckeyes. With Vogrich, McLimans and Christian on the floor together, the Wolverines just didn’t have enough offensive firepower to put together a legitimate offensive run midway through the second half. Realistically, the problem wasn’t that the Wolverines couldn’t get good looks. The problem was that some of their best offensive weapons were sitting on the bench watching.

Even after giving up a 14-2 second half run and failing to take advantage of a Buckeye drought, Michigan was still down only seven with just over five minutes to play. When Burke found an open Douglass in the corner for three, the Wolverines had a golden opportunity to make it just a two-possession game. The shot looked good as it came off Douglass’s hands, but the ball rimmed in and out. Morgan came down with the offensive board, breathing life back into the possession. But instead of going back up strong, Morgan held the ball around his waist as he tried to battle for position, and Craft simply ripped it right out of his hands. On the other end, Craft found Deshaun Thomas in the post, who converted an easy layup as Morgan basically backed out of the way in order not to draw his fifth foul. Instead of a four or five-point deficit if Douglass’s three had dropped or Morgan was successful on the put back, the Buckeyes lead was back up to nine. With 4:59 to play, it was a brutal five-point swing that all but broke Michigan’s back.

5. Wolverines can’t convert on three chances inside and Sullinger delivers the dagger

If key play four wasn’t the dagger for Michigan, this one was. Following Thomas’s layup, Michigan had three chances at a bucket but somehow came up empty yet again. First, Novak found Burke at the block, who was too strong on a layup attempt with his childhood friend Sullinger in his face. Morgan grabbed the offensive board and couldn’t convert either, but Novak then kept the play alive with an offensive board of his own. Novak, who had struggled all day offensively, tried to put the rebound back up and in, but Sullinger had other thoughts. He stuffed Novak and the ball finally ended up in the hands of Craft, who took off toward the other end. Sullinger trailed not too far behind, and in a four-on-three situation, Craft dished it to Sullinger, who received the ball at the left elbow. Somehow, the Michigan defenders completely forgot about Sullinger and were all on the right side of the court. Sullinger coasted untouched to the bucket and finished with a monstrous one-handed slam. Ohio State was then up 54-43 with 4:27 to go, and this one was over.