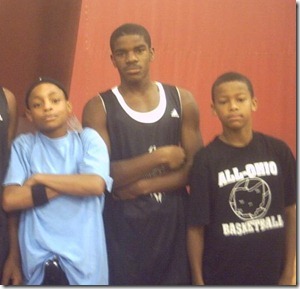 Wherever Michigan plays this season, Trey Burke is running into an old friend or rival from his prep career. His relationship with Ohio State’s Jared Sullinger, his friend and high school teammate, has been well established. Burke has also gone head to head with fellow Big Ten freshmen and Ohio natives such as Penn State’s Trey Lewis, Wisconsin’s Traevon Jackson and Michigan State’s Travis Trice. Now as Michigan runs into Ohio University in the NCAA tournament round of 64, Burke will be reunited with more names from his Ohio past, most notably Ohio freshman point guard Stevie Taylor.

Burke and Taylor have been friends since elementary school but were also rivals on the hardwood. Early on in their prep careers, Taylor’s Gahana squad got the best of Burke and Sullinger’s Northland squad with a shocking 71-45 regional final upset in 2010. That loss ended Jared Sullinger’s prep career as well as Northland’s perfect season and 37-game winning streak.

Despite battling in high school action, the duo played together with the All-Ohio Red program during the summer. Court Cred profiled the Burke and Taylor, and their friendship, during their final season of AAU in this video:

Playing together, the duo terrorized opposing defenses with their lightning quickness and shooting ability. The duo certainly put on a show at the All Ohio City series before their senior seasons:

As opponents, Burke and Taylor would meet again during their senior seasons. As a senior, Burke finially got the best of Taylor, outscoring him 27 to 11 in a 57-52 reigonal semifinal victory. The win was personal for Burke and Northland:

“I call it vengeance,” Burke said. “No matter what anybody said, (last year’s defeat) was going through our minds all week.

“You know, (Gahanna’s) Stevie (Taylor) and I have known each other since third or fourth grade, and he never would have let it rest if we lost to them. Even though I’ve got a (state championship) ring and he doesn’t, he’d always bring up that he beat me head to head.”

Now as freshmen in college the duo will have a chance to settle the score once again. Burke’s freshman year has been an unrivaled success as he shared the Big Ten freshman of the year award and is averaging 15 points, five assists and four rebounds per game. Taylor, a 5-foot-9 guard, has played in every game for Ohio and is averaging five points in 12 minutes per contest. Taylor is forced to play behind one of the elite mid-major guards in the country, DJ Cooper, but has shown the promise of a future star in the Mid American Conference.

Burke and Taylor have already talked, with Taylor tweeting how crazy the match-up could be:

Just got off the phone with @Trey_Burke3 ! Man this basketball thing is crazy!!!!!

Taylor also addressed their relationship to the Ohio media when the pairing was announced:

“Every time we play we have a good time out there,” Taylor said regarding Michigan’s electric freshman, Burke. “We are always competing with eachother. We’ve played against each other since 3rd grade. It should be a fun game. But once we get to Nashville, there’s no friends.”

Ohio’s DJ Cooper is the starter, and star, for the Bobcats but be sure to pay extra attention on Friday night when Stevie Taylor steps on the floor. You can bet that Burke and Taylor’s eyes will open just a bit wider and the whole city of Columbus will certainly be tuned in.