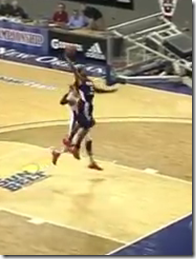 We posted video of Robinson and McGary at the All-American Championship earlier this week. Robinson was named the MVP of the first game and Michigan fans weren’t the only ones impressed by the duos performance. Here’s a few national takes as well:

Much more on Robinson, McGary and more after the jump.

Michigan fans, you will enjoy Glen Robinson, Jr. and Mitch McGary. They’ll have an instant impact.

“I’m a big fan of (Robinson’s) game in general,” Scout.com national recruiting analyst Evan Daniels told AnnArbor.com in January. “He’s got a big, strong athletic body, he rebounds, he shoots well off the catch, and I think he’ll also be a really good defender. He’s a guy who I think has the potential to play in the NBA one day.

Baumgardner profiles Robinson here, as he reflects on his McDonald’s snub and also Michigan taking a chance on him:

“Those guys believed in me before anyone else really did, and that means a lot,” Robinson said. “I really knew I wanted to go there (right away), they have a great coaching staff and their job is to see how players might progress in their upcoming years, not necessarily what they are right now.

McGary was unconcerned with his recruiting ranking slipping:

“I don’t pay attention to rankings; they’re just numbers to me,” McGary said Saturday. “I just like playing and having fun and being around the team. Next year, it’ll be great. … I’m going to be part of great program with one of my great friends (Robinson) and we’ll try to do big things.”

McGary and Robinson’s All-Star festivities are far from over. Next up for Robinson is a trip to California for the Ball is Life All-American Game on Friday (dunk contest) and Saturday (game) at Hope International University.

McGary will head to Portland for the Nike Hoop Summit. Team USA practices take place on Thursday and Friday of this week while the game will be played Saturday evening at the Rose Garden.

After leading Flint Beecher to the MHSAA State Championship, Monte Morris is poised for a big summer on the AAU circuit. Reports are that Morris will suit up with the Michigan Mustangs and team up with Derrick Walton in the backcourt. Along with a busy AAU season, Morris is eying future visits to Iowa State, Butler and USC. Here’s footage of Morris’ junior season on the hardwood (courtesy of @PrepHoopsTV)

Michigan has renewed interest in Morris but over the coming weeks and months we will find out how sincere that interest is.

First we have our final video clip of Amedeo Della Valle in the National High School Invitational:

We previously posted video from the quarterfinals and semifinals but haven’t had much time to reflect on how Della Valle would fit at Michigan.

From a roster standpoint, there’s no argument that Michigan needs additional backcourt depth – with or without Trey Burke. Della Valle isn’t a point guard but he’s a shooter with size and skill that could – at the very least – add insurance to the Wolverine backcourt. Michigan loses about 38 minutes per game at the two position with the graduation of Zack Novak and Stu Douglass and only brings in one player with the natural ability to play that spot, Nik Stauskas.

Tim Hardaway Jr. has rarely, if ever, played the two position since he arrived in Ann Arbor. He will need to continue to improve his ball handling if he’s going to do it for more than a few minutes per game. Matt Vogrich has played short stints at the two and the Wolverine staff will look to him to improve as a senior. Adding another option at the off guard like Della Valle would add a little insurance that the Michigan backcourt would have the depth to keep up with a talented front court.

Della Valle probably won’t make an instant impact but he would be a welcome addition for a Michigan staff that suddenly has additional scholarships to work with.