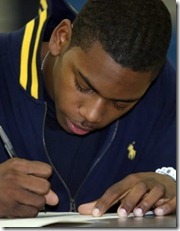 Indiana All-Star games are a Hoosier tradition as the top senior basketball players in Indiana travel around the state for a pair of exhibition games against the state’s top juniors followed by a showdown with Kentucky’s best. In a state defined by prep basketball tradition, these games are generally chock full of talent and this year’s edition was no different.

In a game that featured 10 future Big Ten players – five future Hoosiers, two Wolverines, a Spartan (and Indiana Mr. Basketball, Gary Harris), a Hawkeye and a Boilermaker for those keeping track – a pair of Michigan commitments stole top honors on the score card. Glenn Robinson III led the seniors in scoring with 21 points while Zak Irvin led the juniors with 20.

Robinson tallied his 21 points on 9-of-10 shooting along with seven rebounds, two blocks and two turnovers in 22 minutes. Irvin was slightly less efficient, scoring his 20 points on 8-of-18 shooting (3-10 three point) with six rebounds and three turnovers in 25 minutes.

Robinson was humble after the game and his four dunk performance but did point out that him and his teammates from Northwest Indiana feel slightly overlooked.

“We’re a team,” Robinson said. “We don’t care who scores. We just want to keep working together and get ready to beat Kentucky.”

“A little of that,” he said. “Our guys don’t get as much attention as the guys from Indianapolis.”

Athleticism was the name of the game for the high flying Robinson, who tallied four dunks on the evening. The 6-foot-6 incoming freshman stole the show with a highlight dunk in the second half strong enough to pull an impressive Twitter reaction.

Glenn Robinson throws one down. My God that kid can get up. 98-87 Seniors.

Glenn Robinson has had some monster dunks thanks to some good Ronnie Johnson passes.

Irvin was streaky with his shot but hit a number of timely late baskets, including a fourth quarter triple that cut the senior lead to just five points, and helped make the game interesting. The final result was a 104-97 closer-than-expected victory for the senior squad.

Kyle Neddenriep posted this report on Robinson’s play at the Indy Star:

Glenn Robinson III, Lake Central (Michigan): The All-Stars have been raving about the 6-6 Robinson this week and it’s easy to see why. Robinson scored a game-high 21 points on 9-for-10 shooting and also tied for game-high honors with seven rebounds in 22 minutes. I thought Robinson faded into the woodwork a bit with the junior all-stars last year. He’s a much more complete player now and makes many plays above the rim.

The Juniors will face the Seniors once more on Wednesday evening at Pendleton Heights before facing off with Kentucky on Friday at Freedom Hall in Louisville and on Saturday at Bankers Life Fieldhouse in Indianapolis. The juniors will play Kentucky’s junior squad on Friday the 15th at Heritage Christian (Indianapolis) and Saturday the 16th at North Oldham High (Goshen, Ky.)