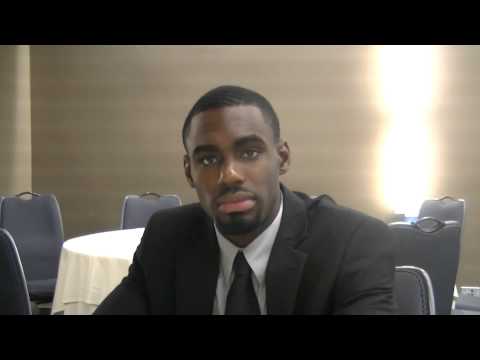 Tim Hardaway Jr. made the trip to Rosemont, Illinois with the Wolverines to represent Michigan for Big Ten Media Day. We sat down with Tim to discuss possible lineups for the season, recent developments in the 60 in 5 competition, Glenn Robinson III’s natural position, and much more. Watch the first part of Hardaway’s interview in the embedded media player below and find part two after the jump along with notes and quotes from Hardaway’s comments.

On the possibility of being a captain:

Being a captain is obviously important, for all basketball players, especially at a big-time program like this. But it’s definitely going to be hard, we’ve got a lot of guys on the team who could be captains, who really don’t even need a captain. Everybody is doing an incredible job of just encouraging one another. So, it’s very tough from the coaching staff, from what they see out there on the court, to choose one. I think we all are doing a great job of just encouraging each other.

On trying out different lineups in practice:

I think we’re pretty close, but we still got a couple weeks before our first official game. Whatever coach Beilein puts out there as a lineup, it really doesn’t matter because we all bring so much to the table and we all know our roles. Whatever happens happens, and we’re just going to roll with it and do a great job.

On running more this season:

You can see in practice a lot of guys running out, getting on the wings, Trey pushing it up the middle, Spike Albrecht pushing down the middle as well. We’re just doing a good job of running and getting the outside lanes. It really helps when you have a 4-man like Mitch McGary who can push it as well. We’ve seen a little bit of progress from him.

Nik has been showing out. That’s who he is, he’s a shooter. You can mess with him and Vogey (Matt Vogrich), those are the kings out there right now. I’m just going to leave those two at the top of that right now. They’re the best right now.

We call him “Baby Durant,” not just because he has that body type, but he can do everything he does: put the ball on the floor, defense, shoot the ball very, very well, and rebound. He’s doing a great job of coming in there and lighting it up.

He’s doing a great job of just staying humble. He’s very athletic, he’s rebounding the ball very well, defensively he’s very very good. He wants it and he wants to learn. He has that same midrange jumper as his pops, it’s hard to block.

On open looks coming from the new talent inside:

They definitely open a lot of things up. The low-post presence we have now is very good. They’re definitely scoring in the low post now, you can see that in the offseason, they were doing a great job with that. The bigs are doing a good job of just getting better every day.

The three would definitely be his natural position.