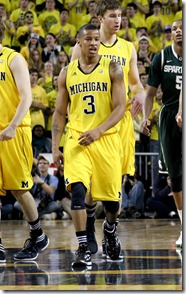 Trey Burke is a winner. Few thought Burke would be able to fill the void left behind by Darius Morris’s early draft departure but the 6-foot guard exceeded every expectation during his freshman season. He didn’t just replace Morris, he was better than Morris. Expectations for Burke’s sophomore year have gone from hopeful to assumed. Rather than unknown freshman, Burke is a preseason first team All-American meant to take Michigan on a deep NCAA tournament run before (more than likely) heading off to the NBA Draft.

Burke has never been one to shy away from expectations but there’s no doubt that the world is expected from Michigan’s point guard in 2012-13. Burke might not be the best shooter, doesn’t have the strongest build and isn’t the most athletic point guard in the country but through 34 career games he’s proven that he knows how to make winning plays. Burke relishes the big stage and needs (not wants) the ball when the game is on the line.

Despite Burke’s magnificent freshman season, he still has plenty of room for improvement as a sophomore. A new crop of supporting players could allow Burke to elevate his game (and draft stock) to another level.

Trey Burke saved Michigan’s season when he opted to return to school. The thought of Tim Hardaway Jr., Nik Stauskas, Glenn Robinson III and Mitch McGary without a point guard was tough to stomach. Having all of that talent on the wing combined with an All-American caliber lead guard means that John Beilein’s hard work on the recruiting trail will pay off and that Michigan is poised for a special season.

There are always worries about kids that “test the draft waters” losing focus after returning to school – focused more on NBA scouts and individual performance rather than winning – but those concerns are generally case-by-case. Trey Burke has proven he’s a winner and it would be shocking to see him focused on anything other than Michigan’s success.

Michigan will go as far as Trey Burke takes them and there aren’t too many other guards in the country that I’d sign over that responsibility to before Michigan’s No. 3. Burke’s freshman year was so prolific that it’s hard to gauge just how much improvement he’s capable of in an off-season. Traditionally the jump from freshman to sophomore, especially for a point guard, is massive and it would be tough to bet against Burke given his track record of improvement. Even consistent incremental progression across the board will mean that Burke is one of the nation’s top point guards by year’s end.

If this year goes as planned, this will probably be Burke’s final season in Ann Arbor. Michigan fans should enjoy it as all signs point toward him being a better player, and leader, in 2012-13. Expect Burke’s scoring average to hang steady near 15 points per game but add to his assist averages with a stronger supporting cast.

Quotable: “Having [Trey Burke] back has been helpful because he’s a good player, he is a winner, he’s proved he’s a winner and having talent is one thing, teaching winning is another thing. He’s been through a year where he was so helpful in that Big Ten championship in games both at home and on the road. – John Beilein at Big Ten Media Day