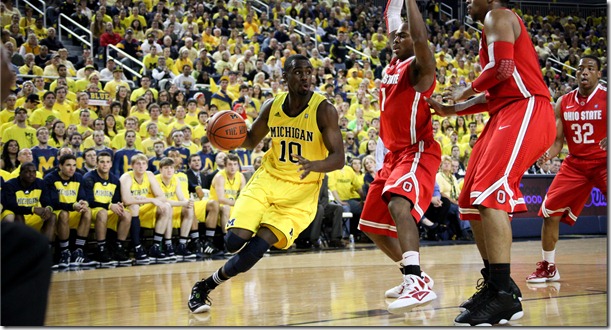 With Michigan’s biggest game of the season yet just over 48 hours away on Sunday afternoon, Chris Lauderback of Eleven Warriors and I exchanged questions about the rivalry showdown. My answers to his questions will be going up over there sometime on Saturday but here are his thoughts on the Buckeyes and Sunday’s match-up.

DeShaun Thomas is a scoring machine and I’ve always been quick to praise his offensive prowess, but what secondary scoring options have stepped up for the Buckeyes?

A punch to the gut on the first question?! I see the rivalry is alive and well. In all seriousness, the lack of a consistent 2nd scorer is probably the most impactful of three issues that have loomed largest over Ohio State’s struggles against the only three decent teams they’ve played (@Duke, Kansas, @Illinois), along with an increased turnover rate and spotty defense.

Aaron Craft actually stepped up in Tuesday night’s much needed victory at Purdue with 15 points, 13 in the 2ndhalf, to complement Deshaun’s 22 point effort as the Buckeyes built a big 1st half lead and fended off late game Boiler runs. It’s been a struggle all year for Craft and to see him hit 6/7 shots from the field couldn’t have come at a better time with Sunday’s showdown on the horizon.

That said, Craft was really only slated to hopefully evolve into the team’s 3rd or 4th scoring option role with Lenzelle Smith and LaQuinton Ross tabbed early on as guys expected to evolve into larger scoring roles following the departures of Jared Sullinger and William Buford.

Smith hasn’t been shy about trying to seize the 2nd scorer role but the results have been mixed. He’s doubled his FGA per game and has seen his 3FG% increase from 38% last year to 44% so far this season but he’s been an absolute no-show in Ohio State’s three major tests, shooting a combined 29% on 10/34 from the field including a 3/13 stinker at home against the Jayhawks.

Ross, a 6’8” swingman that played just 35 minutes last season thanks to academic issues that held him out of Ohio State practices until early December, came in regarded as a talented scorer but has yet to adjust to the speed of big time college basketball. For two offseasons, all we’ve heard is how he’s poured in points playing pick-up games against current and former Buckeyes but he continues to be an enigma in his sophomore season.

Ross went for double figures in six cupcake games including 22 against Northern Kentucky but he didn’t even average 12 min/game against the three noted legit opponents OSU has played, shooting a combined 4/17 with six turnovers. Matta is quick with the hook on Ross as he has some very loose handles and while he’s a decent rebounder, his on-ball defense is a bit of a liability at this stage of his development.

The combined scoring inconsistencies of Smith, Ross and Craft have put a ton of pressure on Thomas to carry the load and have made Ohio State too easy to guard in those big games.

Apologies for the long response here but whether or not at least two off these three guys step up on Sunday to help Deshaun will determine whether Ohio State has any chance of pulling the upset.

What’s the consensus among Ohio State fans with Ohio State’s start? The Buckeyes are 12-3 overall but don’t have much in the way of quality wins at this point. This looks like a pretty good but not elite Ohio State team, but what are the expectations in Big Ten play and in March?

Considering the run Matta’s squads have been on, winning at least a share of the last three conference crowns and going to a couple Final Fours in recent years, the expectations were pretty high though they were tempered just a bit knowing the squad would have to replace the combined 32 points and 14 boards Sullinger and Buford added a season ago.

The thought was that while Ohio State would be as raw as they’d been in years to start the season, thus expecting no less than six guys to take on significantly expanded roles, there would be some growing pains early but that the staff and players would evolve into a top 10 team by March.

Through 15 games, fans are disappointed with the lack of growth shown my Amir Williams and Ross not to mention the inconsistency of Smith and Craft. At this point, most fans would be ecstatic at a 3rd place conference finish, accepting of 4th, but let down with anything lower. As for the Dance, preseason hopes of an Elite Eight have mostly morphed into hoping for a Sweet Sixteen.

You know how it goes though. If this team shows some life and pulls off a few upsets, the expectations will change once again.

The obligatory Trey Burke vs. Aaron Craft match-up question. Last year you could probably chalk the battle as 1-1-1 but Craft gets the season-edge for coming away with a pair of victories. Nobody has come close to slowing down Burke this year, how do you see the match-up playing out in Columbus?

In my eyes, the Burke/Craft matchup is the 2nd biggest factor to watch, right behind whether or not Thomas gets any scoring help, as I discussed in your opening question.

Last year, in Ohio State’s pair of victories over Michigan, Craft held Burke to a combined 6/22 from the floor with a ridiculous 13 turnovers but in the lone Wolverine victory, Burke tallied 17 points and five assists and was a huge difference maker down the stretch in a five point game.

With Burke a more seasoned player, I obviously don’t see him having another 1/11 stinker as he did in the B1G tourney semi-final matchup but at the same time, I’d like to think Craft will keep him from going off for 20+.

That said, one thing to keep an eye on will be how the game is officiated. Craft is a very physical on-ball defender and he’s been a little over-aggressive, getting his 2nd foul way too early in the opening half, on a few occasions thus far including Tuesday at Purdue. While Shannon Scott is a very solid on-ball defender is his own right, I have to believe Matta wants to use Craft on Burke for 40 minutes, if he can, knowing he held Burke in check two out of three last year.

Michigan’s offense has been on a nearly unstoppable pace but the Buckeyes have the strongest defense John Beilein’s team has seen yet. What are the strengths and weaknesses of Ohio State’s defense.

Ohio State’s primary strength is in on-ball defense along the perimeter. Specifically, Craft and Scott are ball-hawks that can not only create steals (2.1 and 1.8 spg, respectively) but lengthen the point in which the opponent initiates their offense. Sam Thompson and Smith aren’t as tough guarding the ball but they’re still fairly effective. So, while the Buckeyes rarely press, they can put decent pressure on ball handlers in the half court.

Of course, the risk of playing so aggressive out top is that if a defender is beat off the bounce, there isn’t the same level of help defense. This has been a problem at times for OSU because not only is it tough for the other perimeter players to rotate over if they’re chesting their man (assuming he’s a 3 point threat), the lack of a true inside presence makes it easier for slashers to finish.

Williams (6’11”, 250 lbs) took over the starting center gig a few weeks back and is averaging 1.5 blocks per game but he’s far from an impact defender at this stage of his sophomore season. His backup, senior Evan Ravenel boasts a wider frame (6’8”, 260 lbs) and has a higher basketball IQ but those two were no match for either Mason Plumlee or Jeff Withey. I guess the good news for Ohio State fans is that nobody confuses Jordan Morgan for Plumlee or Withey but if guys like Robinson III, Burke and Hardaway Jr. beat their guy off the dribble, they could have some success taking it to the rack or pulling up for short jumpers.

Who is the most likely under the radar Ohio State player to have a big game on Sunday?

That’s really tough to say just because I don’t know how many guys in the rotation are under the radar. Taking a different slant, I’d go with either Smith or Ross.

I’d say Smith, who is a known commodity, just because he’s a streaky shooter that’s been in a slump lately. He’s shot a combined 4/15 the past two games while hitting 12/21 from the floor the two games prior.

I’ll throw Ross in there because he can be more easily defined as under the radar, and after he played well in the 1sthalf against Purdue scoring six points on ¾ shooting with three boards in nine minutes, Thad kept him nailed to the bench the entire 2nd half. Plus, if Sunday’s game sees Michigan having a lot of success scoring the basketball, Matta might be forced to give Ross more minutes in hopes of keeping up offensively.

What’s the most important thing that needs to happen for Ohio State to beat Michigan?

I know it sounds pretty elementary but Ohio State has to make shots. Scoring points has been a struggle against legit competition with the Buckeyes shooting just 34% at Duke, 31% against Kansas, and 33% at Illinois. Craft and Smith have been the chief culprits sandbagging the overall FG% but putting the ball in the basket against good teams has been a struggle for almost everyone not named Deshaun Thomas.

The need to make shots also extends to the free throw line where the Buckeyes have also struggled. They’re shooting just 67% from the stripe on the season and they’re shooting a ridiculous 52% over the last four games (37/71).

If they don’t see their percentages at least in the upper 40’s from the field and over 70 from the line on Sunday, I don’t see how an upset is possible.

How do you see this one playing out on Sunday?

Despite the fact Ohio State has owned Michigan in recent years, winning 16 of the last 19 matchups, I just don’t think this team has enough firepower to take down a Michigan squad that’s really in an offensive groove right now.

I don’t think it’ll be the blowout many Buckeye fans are worried about but I’ll say Michigan wins by seven or eight points.