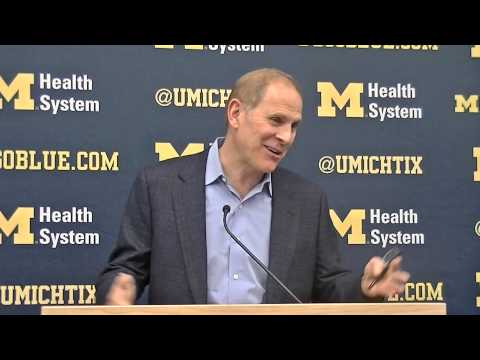 John Beilein met with the media on Friday to discuss his team’s upcoming match-up with Penn State at the Crisler Center this Sunday at noon. Beilein touched on an array of subjects, from Glenn Robinson III’s struggles to how Michigan has bounced back from the devastating loss to Michigan State to the dedication of Crisler event on Friday night. Beilein also mentioned that Jordan Morgan was able to participate fully in practice, but he is not 100 percent. You can watch using the embedded media player below or read selected notes and quotes after the jump.


Opening statement: “Exciting weekend here with the re-dedication of Crisler. Hence, I’m dressed up a little bit for later on today. It’s really exciting. So many people are coming back, and I’m so proud of this new facility. I like looking at the eyes of the former players who have come back so far, the few that I’ve met, and others to come. We also have a challenge with Penn State on Sunday that’s playing better and better, despite their record. They had a chance to beat Iowa last night. We have to be ready for that. I think we regrouped very well after the loss at Michigan State. Had a great practice on Wednesday, and a full practice, all in. Then we took yesterday off and now we’re ready for our normal two-day prep for the Nittany Lions.”